Nola has taught elementary school and tutored for four years. She has a bachelor's degree in Elementary Education, a master's degree in Marketing, and is a certified teacher.

Do you like to eat amazing food and play games with all your friends? Ancient Egyptians enjoyed celebrating festivals and having feasts often. This lesson will discuss some of the most popular festivals and holidays of ancient Egypt. Updated: 12/24/2021
Create an account

The ancient Egyptians enjoyed celebrating a number of holidays and festivals throughout the year. They celebrated with games, large food banquets, and parties. Many of their festivals were based upon either the timing of the lunar calendar or the flooding of the Nile river.

The ancient Egyptians liked to pay respects to the gods that they believed kept watch over them and allowed them to grow new crops each year. This lesson will discuss the three most popular festivals: Wepet Renpet, the Festival of Opet, and the Festival of Khoiak. 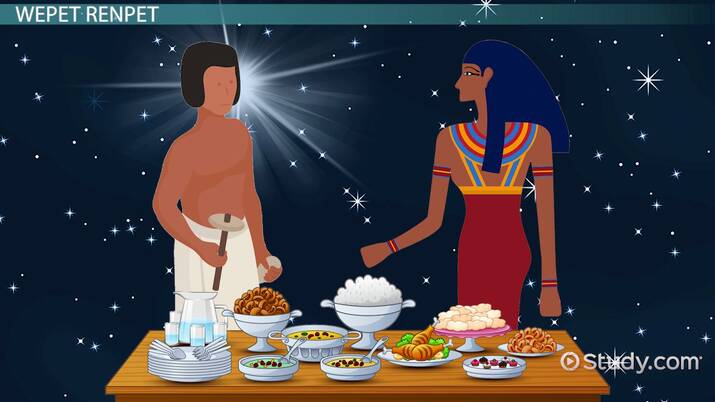 Coming up next: Step Pyramid Facts: Lesson for Kids

What's your favorite thing to do on New Year's Eve? Watch fireworks or have a party? The ancient Egyptians also celebrated New Year's and they called it Wepet Renpet, meaning ''the opener of the year.''

Unlike here in the United States, the Egyptian New Year was not on the same day each year. It corresponded with the annual flood of the Nile River, which occurred around July. They were able to predict when it was coming by watching the stars.

When Sirius, the brightest star in the sky, became visible after not being seen for 70 days, they knew the annual Nile flood would be there soon. Wepet Renpet was a symbol of renewal and rejuvenation and a time for great celebration and feasts, which are large meals in celebration of something.

The Festival of Opet

One of the traditions of this festival is that the ancient Egyptians would carry the statues of three Egyptian gods almost two miles from the temple of Amun to the temple of Luxor. Can you imagine carrying heavy statues that far?

The procession, a group of people walking together in an orderly fashion, would stop at churches along the way so the people from the area could bring offerings. During the celebration, people were allowed to ask the statues of the gods questions, and the priests would relay the answers to them. What questions would you have asked?

The statues would remain at the temple of Luxor for three weeks and then were returned home until the next Festival of Opet the following year.

The Festival of Khoiak was created to celebrate the god Osiris and is also known as ka-her-ka, which means ''sustenance upon sustenance.'' Sustenance means to continue living. This title is fitting because it took place in the fourth month of the year at the end of the Nile's flood season.

When the floodwater receded, the soil that was left in its place was very fertile and excellent for growing crops. The ancient Egyptians would shape the soil into an image of Osiris' face, similar to building a sandcastle at the beach, and plant seeds in it. When new plants grew, they were literally growing out of Osiris' face. What a sight that would be to see!