Greek sculpture and pottery evolved through the ages with the discoveries of new techniques and materials that can be used to make new forms of art. Learn about the different art styles of Greek potteries and sculptures, and how they utilized different types of materials to improve their craft and create new concepts in sculpting and pottery that remain relevant in the present. Updated: 08/06/2021
Create an account

Remember the original gaming systems, with their blocky 8-bit characters? This blocky style was not an artistic choice, but rather a limitation of the medium - in this case, the medium of digital technology. As the medium refined, so did artistic style until today, when our video game characters look as real as you or I. This is essentially the story of Greek art.

The Greeks did not suddenly decide to make their art more realistic, while their predecessors chose more stylized approaches. Rather, the Greeks discovered the methods and materials necessary to capture reality more accurately than any culture before them.

In this respect, the Greek artistic achievement had as much to do with mastery of the medium as with creative artistic genius. This lecture will follow the progress of two mediums that the Greeks came to master, pottery and sculpture. 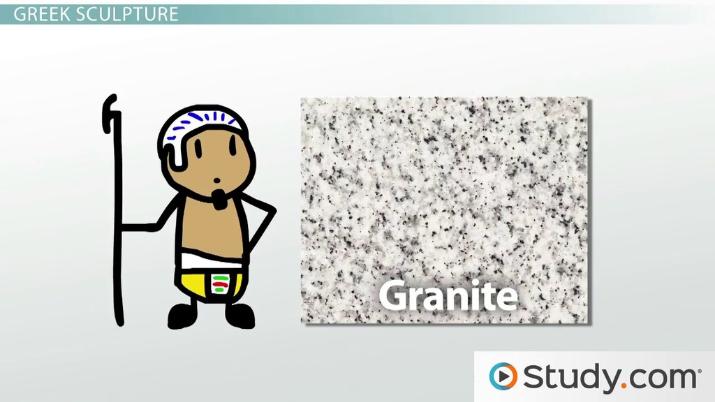 Greek pottery comes in many lovely shapes and sizes, designed to hold everything from olive oil to ballots. Yet it is not the shape of Greek pots that grabs our attention, but rather what was painted on those pots. Though the Greeks painted many things, from statues to walls to buildings, the only form of Greek painting that has survived to this day is on their pottery.

Then, around 750 BCE, the Greeks were swept up in the artistic styles of the East, which featured animals and people. This Orientalizing period lasted for about 150 years, and inspired the Greeks to add motifs within their geometric patterns.

Around 700 BCE, the Greeks invented a new method of decorating pottery. Rather than painting fired pots, they developed a paint they could fire, which we now call a slip. With this black slip, they could create sharp contrasts with the red-orange clay of the pot. Rather than drawing individual lines, potters of this age drew figures in silhouette before firing the pot. Once the pot had cooled, they added details to these figures by scratching away the black slip, letting the orange beneath show through. This is called black-figure pottery. It would take about 200 years to improve upon black-figure pottery, but they did, of course.

The apex of Greek pottery was the red figure. This was essentially the inverse of black-figure vases. The background was painted in black slip, leaving the silhouettes of figures in the red-orange of the clay. These open figures could then be painted in greater detail and with more colors than the scratching black-figure method allowed.

As Greek figures became more and more important, the geometric patterns that had once dominated Greek pottery gradually pulled back to the borders.

While the Greeks may have drawn inspirations from a variety of style in their paintings, it was their technical skill with the medium of pottery, rather than their motifs, that distinguished Greek pottery from other forms of the time.

Without getting into too many details, we can see why marble makes for better sculptures. Marble is stronger than clay, limestone or sandstone, yet marble is softer than granite. The mixed-up nature of marble also means that you can cut marble at any angle, whereas a misplaced blow on more crystallized sorts of stone, like sandstone and granite, could ruin an entire sculpture.

So imagine you're an Egyptian, working on a granite statue. Granite is harder than steel, so you're going through tools like crazy. Because granite has a crystalline structure, once you get to a certain level of detail, you risk ruining the whole piece by asking for more. With so much work and materials already invested, how likely are you to push the established limits? Not very.

By contrast, in marble, the Greeks had found a material that was easy to work with and could be endlessly refined down to the smallest detail. With such a material, the stunning quality of Greek sculpture was, to some degree, only to be expected.

Yet it took the Greeks a while to realize their destiny.

Early or, Archaic, Greek sculpture looks a lot like Egyptian sculpture, which is probably its inspiration. These figures are stiff, and they stand in unnatural poses. These poses were necessitated by the poor materials the Egyptians had to work with.

As the Greeks began to get a feel for marble, they began to make refinements on this form. Archaic sculptures are easily identified by the 'Archaic smile'. Early artists assiduously copied this slightly constipated expression.

Later Greek sculptors would try to make it look more natural. This trend toward more natural poses and expressions gave rise to realism.

The Greeks eventually realized that with marble, their statues could step out of their unnatural stances and set more heroic poses. We begin to see action in sculpture. Here's Heracles holding up the world for Atlas. Here's Lapiths fighting Centaurs. And here's Laocoon and his sons in a wrestling match with snakes.

Yet the Greeks were not satisfied with merely copying reality. With their newfound finesse, Greek sculptors tried to capture the ideal human form. Here's the famous Doryphoros. Here's a sweet statue of Apollo. And here is Winged Nike - she was ideal before she lost her face, I assure you.

Some artists even extended this idealism to animals, as can be seen in a sculpture from the Parthenon, what some have called the 'horsiest' horse.

Thus we've seen how the triumph of Greek art lay as much in their technical skill as in their artistic brilliance. Their beautiful pottery with its sharp details was the product of centuries of experimentation with ceramics. Their lifelike statues in natural poses were made possible by their mastery of marble. To return to our original metaphor, it's like everyone up to that point had been working on a 16-bit system, while the Greeks developed a new 64-bit system.

Yet to focus solely on the mastery of materials that Greek artists displayed would be to underestimate their own creative genius. Even with the necessary materials and skills, it takes an inspired individual living in a creative society to make such breathtaking works of art. The artistic achievement of the Greeks established the standard by which Western art would be judged until the collapse of the Roman Empire. Western civilization would not see its like again until the rediscovery of classical Greek art gave rise to the Renaissance.

What is Hip Hop Subculture?