Explore the geography and environment of ancient Israel. Discover where the country is located in the Fertile Crescent, the crops and trade of the inhabitants, and the major topography and cities of the area. Updated: 01/10/2022
Create an account

When most people think of ancient Israel, they think of a hot, dry desert where people lived in tents. However, ancient Israel had a much more temperate environment and evolved into a settled nation over time. Ancient Israel was located in what scholars refer to as the Ancient Near East, which was an area around what we today call the Middle East. Among the various nations or city-states in this area, Israel evolved into a nation with a monarchy around the 11th century BCE. Before this, the Israelites, who were the descendants of Jacob according to the Tanakh (the Jewish sacred scripture), inhabited Israel. They were a nomadic people who lived in tents and impermanent dwellings and traveled from place to place.

The climate of ancient Israel was not just dry: the temperatures ranged from about 40 to 85 degrees Fahrenheit, and there was a rainy and a dry season. Israel was located in the Fertile Crescent, an area that had fertile soil because of the rivers going through it. This fertility allowed the Israelites to produce several crops and trade them with their neighboring nations. One of the most important trade partners was Egypt, a major world power at the time, so this trade partner would have been a great influence on Israelite culture and economy. 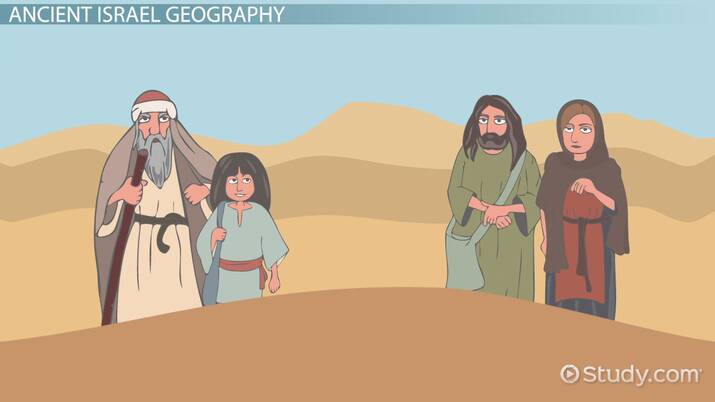 Coming up next: Israel: From Tribes to Kingdom

Israel is called the ''land flowing with milk and honey'' in the Tanakh to describe the prosperity of the nation. The Israelites probably did not have cows or bees, however. The milk was probably goat milk, as goats were one of Israel's major resources, in addition to sheep. The honey would have been more like a syrup: dates or grapes (both major resources of Israel) were boiled and strained to make a thick, sugary liquid.

In addition to livestock and fruit, Israel also produced grains, like barley and wheat. These resources figure largely in the stories in the Tanakh of shepherds (like David), people gleaning wheat in fields (like Boaz and Ruth), and the significance of bread and wine for Passover celebrations. When trading these resources, Israelites would typically travel by two major roads that ran North to South and passed through Israel: the King's Highway, which ran from Damascus to the Gulf of Aqaba in middle to lower Egypt, and the Way of the Land of the Philistines, which ran from Damascus to upper Egypt along the Mediterranean Sea.

Although Israel was a small nation—roughly the size of the state of Vermont—it contained several regions with different climates. Most of the major cities of Israel were located in the central highlands or the hill country, which extended from Samaria to the Jordan River. As the name suggests, the region was very mountainous, which provided more security to major cities like Shechem and Jerusalem. The Jordan Rift or Rift Valley contained many major bodies of water like the Sea of Galilee, Jordan River, and Red Sea and provided a natural boundary to the east of Israel because of the drop in elevation.

Ancient Israel was home to several major cities that are mentioned throughout the Tanakh. One of the earliest cities that was important to the patriarchs, the founders of Judaism, was Hebron, which was located in the southern Kingdom of Judah after the united Kingdom of Israel split. It had a good climate for growing grapes and plums and was supposedly where the patriarchs were buried. It also was where the prophet Samuel anointed David king of Israel.

Bethlehem, another city in Judah, also had a strong tie with the Davidic kingship because David was from the city. Beersheba played an important role in the biblical stories as Yahweh, the Israelite god, reveals himself to Isaac, one of the patriarchs. The Tanakh explains that Isaac, receiving this divine revelation, built an altar here for Yahweh. When the city was located in Judah after the kingdoms split, it was probably a military settlement, according to archaeological findings. However, when the Assyrian king Sennacherib invaded Judah in 701 BCE, the city was destroyed.

The most important city of Judah—and of the entirety of Israelite history—was the city of Jerusalem. This city, located in central highlands, was home to the Temple Mount where Solomon's Temple was built. The Temple was the central focus of ancient Judaism and was thought to house the presence of Yahweh, so Jerusalem was an incredibly important city for Jewish practices as well as being the capital of Judah and housing the monarchs of Judah.

In the northern kingdom of Israel, the capital moved several times. It was first in Shechem where Dinah, Jacob's daughter, was raped and her brothers destroyed the city as revenge. The capital was moved to Tirzeh for a while until Zimri violently took over the kingship, then burned the city to the ground with himself inside as Omri succeeded him with the support of the Israelites. Under Omri, the capital was moved to Samaria, which was established by Omri and fortified against Judah. A temple was built here that supposedly contained the Tabernacle, the tent-like structure that supposedly housed the presence of Yahweh during the Israelites' nomadic period.

Okay, let's review. Ancient Israel, located in the Ancient Near East, an area around what we today call the Middle East, developed over time into a thriving civilization. Due to its location in the Fertile Crescent, an area that had fertile soil because of the rivers going through it, Israel produced crops like wheat, barley, grapes, and dates and also raised livestock like sheep and goats, which it traded with neighboring nations through two major highways.

The central highlands region, the hill country which extended from Samaria to the Jordan River, contained most of the major cities of Israel, while the Jordan Rift contained many major bodies of water like the Sea of Galilee, Jordan River, and Red Sea and provided a natural boundary to the east of Israel because of the drop in elevation and provided a natural boundary to protect the nation from its enemies.

In Judah, cities like Hebron, Bethlehem, and Beersheba were important locations due to their history. The most important city was Jerusalem, where the Temple was located. In the northern Kingdom of Israel, the capital moved from Shechem to Tirzeh to Samaria to move it further from the enemies in Judah.

Israel: From Tribes to Kingdom

What Is the Kush Civilization?

The Hebrews and Their Beliefs

Queen Hatshepsut & Ramses the Great | Who Were Ramses and Hatshepsut of Egypt?