The Mali Empire was a pretty impressive military state, but what really made it famous was its government and economy. In this lesson, we'll explore these aspects of the empire and see how ancient Mali functioned.
Create an account

The Empire of Mali

Much of Africa was colonized by European empires, which parceled off the land into colonies and assigned those colonies names. As a result, the names of many African nations don't necessarily reflect the ancient African kingdoms to once dominate the continent. There is one notable exception: Mali. The modern nation of Mali is named after an ancient African kingdom called the Empire of Mali that controlled parts of Western Africa from the 9th century through the 16th. Mali stretched roughly 1,200 miles across what is now parts of Niger, Senegal, Mauritania, Guinea, and of course, the modern nation of Mali. At the time, its size was challenged only by the Mongol Empire of Asia. That's an empire worth naming your country after. 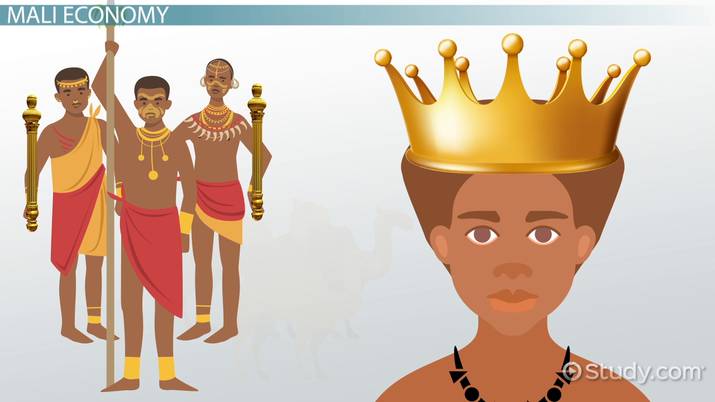 Government of the Mali Empire

So, Mali was big and cool, we get it. But what was life actually like in the Mali Empire? Well, that question was generally determined by the mansa, the emperor of Mali. The mansa had absolute power which was incontestable. He ruled the empire with total authority, passed down by heredity. In fact, nearly every part of Mali society was based on ancestry. Each clan had its own founding ancestor, and most people were required to be whatever their parents were. That means that if your parents were merchants, you would be a merchant. If they were farmers, you would be a farmer. If they were in government, then that was really your only career option.

So, the mansa had complete power, but he also controlled a massive empire, and this required a large amount of bureaucratic administration. Not only was the mansa advised by a number of bureaucrats who carried out his wishes within the city, but territorial governors oversaw administration of the various regions of the empire. Under each governor were tribal chiefs and clan leaders elected by their people, who were most directly in charge of implementing imperial policies at the local level. For the most part, the mansa left people outside of the major cities alone as long as they paid their taxes and did not attempt to rebel.

The Mali Empire functioned with a complex and centralized system of administration. Where did this come from? Around 1000 CE, the Mali people and rulers largely adopted Islam as their religion. The structures of Islam not only generated a royal obligation to fund education and the arts, but also provided guidance on creating a clearly organized society. Islam was the state religion of the Mali Empire and was crucial in matters of daily administration and government.

The other major thing that really impacted people's lives and the functioning of the empire was its economy. Above all, the Mali Empire was recognized in its time for its vast wealth. In fact, the empire's greatest ruler, Mansa Musa, made sure of this reputation. Around 1324, he made a pilgrimage to Mecca, the Islamic sacred site, and brought with him 500 slaves carrying staffs of gold, followed by 100 camels laden with over 30,000 pounds of gold and jewels. Mansa Musa spread this wealth through Cairo as he passed across Egypt on his way to Mecca, and the legends of his wealth can still be heard in folktales to this day.

Mansa Musa wanted people to associate the Mali Empire with gold, and that's simply because they had a lot of it. Whereas other nations of Central and Western Africa had traded gold before, the Mali Empire directly controlled some of the most prolific gold mines in the continent. Not only did they have access to abundant gold deposits, but the empire also expanded to cover the trade routes of the region. That meant they could tap into vital international trade routes of Central Africa that stretched north, south, east and west. Some of these were connected to other routes expanding as far as Europe, India, and China. Trade, not just gold, sustained the incredible wealth of the empire.

As if this wealth wasn't enough, the Mali Empire had also grown along the very fertile Niger River floodplain. This meant that despite being a massive and growing empire, they were actually able to produce most of their own food. This isn't something that every empire of the ancient world could say. Rome, for example, had to import most of its food from other regions. Mali, however, thrived agriculturally, which only allowed its wealth and stability to increase. The Mali Empire would eventually collapse around 1600, but would leave behind a legacy as one of the largest and wealthiest empires Africa has ever known.

The Mali Empire was a major military state the controlled much of Western Africa from the 9th through the 16th centuries. It was ruled by a powerful emperor, called the mansa, who received his position hereditarily, as did nearly everyone in Mali society. The mansa governed with a complex bureaucratic administration extending to territorial governors, although outside of the cities this was mostly just to collect taxes. The centralized imperial administration was largely a result of Islamic teachings on structured and organized societies. Mali was famous in its day for its wealth, which was a result both of gold mines and international trade routes controlled by the empire. The Mali Empire grew to be one of the largest in Africa's history, and a pretty good namesake for the nation of Mali today.

The Development of the Byzantine Empire

The Fall of the Songhai Empire

The Spread of Islam and the Progress of the Caliphates