Kristin taught for over 10 years in the elementary classroom. She holds a B.A. in Journalism as well as a Master's Degree in Elementary Education.

View bio
Ancient Roman society was structured as a hierarchy. Examine how Romans broke their society down into different classes, explore the differences between classes and what all classes had in common, and learn how a Roman could move up in class. Updated: 01/04/2022
Create an account

Imagine if you lived in ancient Rome. What would your life be like? What would your job be? What rights would you have? Well, in ancient Rome all of those things depended on what social class you were in. Ancient Rome was made up of a structure called a social hierarchy, or division of people into differently-ranked groups depending on their jobs and family. The emperor was at the top of this structure, followed by the wealthy landowners, the common people, and the slaves (who were the lowest class).

Your social class mainly depended on what type of family you were born into. Roman citizens didn't get to choose their class. Wealthy children were almost automatically a part of the upper classes, while children born to common people usually stayed in the lower classes for life. 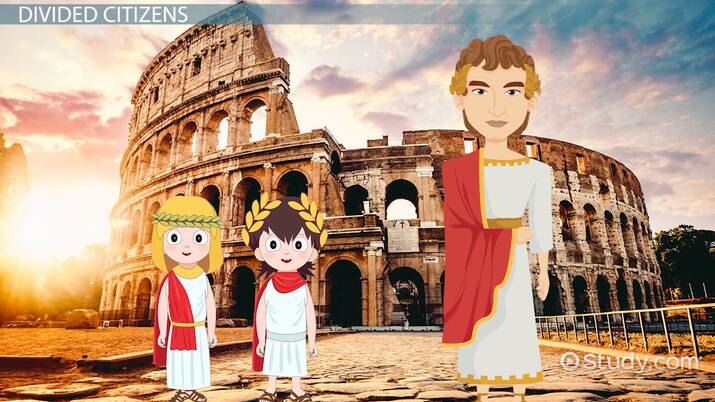 Coming up next: Ancient Roman Contributions: Lesson for Kids

The emperor was at the top of the structure, and no one had more power than him! Patricians were the people just below the emperor. This upper-class group included the wealthiest and most powerful citizens. Members of government and nobles (the highest title) all made up the upper class. They were just a small fraction of the population, but they had the most control and power. These people enjoyed the finest foods, the fanciest clothing, and relaxing days with little work. They also received the best education and jobs.

On the other hand, plebeians were the common people that made up the majority of the population in ancient Rome. These were the farmers, craftsmen, traders, and other workers. These people spent their days working from dawn to dusk. In the early days of the empire, the plebeians could not participate in government, but eventually, they were given this right.

All adult males who weren't slaves were citizens of Rome. Whether a plebeian or a patrician, these men were given rights in government. Slaves, however, were given no rights, and women had very few rights as well. Although women were part of the plebeian or patrician classes, the slaves were in a class of their own that was well below the citizens. Occasionally a slave could be freed by his master or could purchase his freedom. Once a slave was freed, he or she became a part of a higher class of freed people. This class was above the slaves, but below the plebeians.

The Roman culture was strong; therefore, no matter what class you were, you still shared the same values with other Romans. Family was very important to all classes. Old age was respected, and men were looked at as the head of the household. Everyone honored the same gods, celebrated festivals, and contributed to society in their own way.

Moving Up the Social Ladder

The classes rarely interacted socially with each other. However, people could get moved up in society for several reasons. First, the emperor had the power to promote a citizen to a higher class for any reason. It has even been said that emperor Caligula made a horse a senator! Also, if a slave bought or was given his freedom, he could move up to a higher class. There were a few other exceptions, such as lower-class citizens working their way up by purchasing land or gaining wealth.

Ancient Rome was made up of a structure called a social hierarchy, or division of people into differently-ranked groups depending on their jobs and family. The social hierarchy of ancient Rome was pretty strict. At the top was the emperor. Patricians were the people just below the emperor and included the wealthy, the nobles, and the members of government. Below them were plebeians, the common people that made up the majority of the population, i.e. farmers, craftsmen, traders, and other workers. Romans were born into a class and usually stayed in that class for life. With a few exceptions, people could move between the classes, but that was rare. No matter what, though, all Romans enjoyed a similar culture. Family was important, the gods were honored, and together, everyone helped make society stronger.

Create a set of flashcards that provides the definitions of all of the terms that are in bold from the lesson (social hierarchy, patricians, plebeians, slaves). Place the term on one side of the card and the definition on the opposite side.

Example: A slave had no rights and belonged to his master.

Create a chart, poster, or some other type of graphic organizer that lists and briefly describes the social hierarchy of ancient Rome. Make sure that your graphic organizer notes what the daily life was for people in each social class.

Example: Patricians ranked just below the emperor, and they were rich, so they enjoyed buying luxury items, such as nice clothing.

Make a chart, poster, or some other type of graphic organizer that lists and briefly describes the values that were common to people of all social classes in ancient Rome.

In one paragraph, write an essay that explains how social class was determined in ancient Rome. Also make sure that your essay addresses what life was like for women in ancient Rome.

Example: Ancient Roman women did not have that many rights, even if they were from the patrician class.

Write an essay of one paragraph that explains how people in ancient Rome could move up the social hierarchy.

Example: Buying land could help someone move up the social hierarchy.

Effect of Wealth on Daily Life in the Roman Empire

Roman Economy in the Dark Ages