Wendy has taught all subjects of high school social studies and English and has a master's degree in Secondary Education.

In 2001, Andrea Yates drowned her children and calmly confessed to the crime soon after, calling authorities herself. Delve into the Andrea Yates case, learning about Yates's insanity defense, her religious influence, and the outcome. Updated: 11/18/2021
Create an account

Andrea Yates might have become the most hated woman in the United States in 2001, when the news broke regarding her actions on the morning of June 20 in Houston, Texas. On that fateful morning, Mrs. Yates filled a bathtub with water. She then drowned her five children, one by one, in the bathtub. She laid the dead bodies of five-year old John, three-year-old Paul, two-year old Luke, and 6-month old Mary on her bed. She left her oldest, Noah, age 7, in the tub.

She then calmly called the police and asked them to come to her house, and called her husband, Rusty Yates, at his workplace as a NASA engineer. She told her husband to come home. When the police arrived, she flatly stated that she had killed her children and showed the officers the dead bodies. Mrs. Yates never denied the killings, but she later offered a bizarre explanation: that she had killed her children to save them from hell.

The public was horrified and outraged. Such a crime was beyond understanding. What the public did not know at the time, however, was that Andrea Yates was severely mentally ill. She had undergone inpatient psychiatric hospitalization just a few months before the children's deaths. Mrs. Yates was functioning so poorly that her mother-in-law, upon coming into town for a visit in April 2001, felt the need to stay in Houston and help care for her grandchildren. She was scheduled to come to the home the morning of the killings, but Andrea Yates drowned her children in the hour between her husband's departure for work and her mother-in-law's arrival.

Mrs. Yates stood trial for capital murder in Houston in 2002. Capital murder means that the state is seeking the death penalty against the defendant for the crime of murder in the first degree. Texas is a very strong death penalty state, leading the country in numbers of executions. Because Andrea Yates was charged with a capital crime, the jury on her case was death qualified, meaning that members of the jury were questioned during voir dire, the jury selection process, on their beliefs about the death penalty. Potential jurors whose personal beliefs would prevent them from being able to vote for the death penalty were excluded from the jury. Studies have shown that death-qualified juries are more likely to convict defendants. 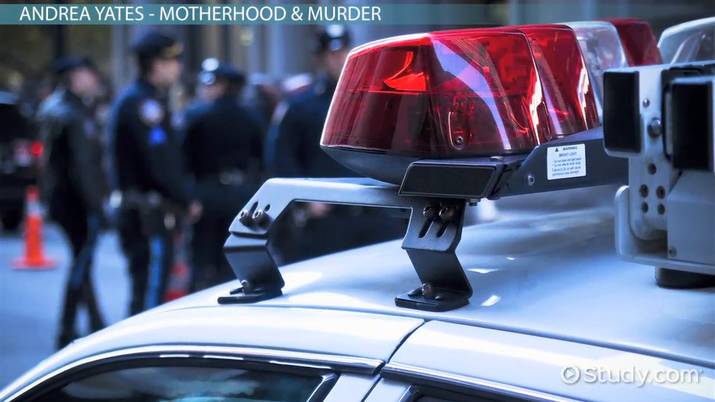 At trial, both the prosecution and defense agreed that Mrs. Yates was mentally ill. A bright and successful registered nurse before her marriage, Mrs. Yates began suffering hallucinations after the birth of her first child. By the time of the killings, her history of mental illness was well-established. She had attempted suicide twice, had self-mutilated, and had been hospitalized three times for psychiatric illness. Her depression was so severe that she sometimes stopped eating or drinking. She had suffered several psychotic breaks and numerous visual and auditory hallucinations.

Although she had improved on anti-psychotic medication, her psychiatrist did not continue prescribing this medication because he believed the side effects were problematic. Mrs. Yates also did her best to conceal her illness when she could.

Mrs. Yates's attorneys entered a plea on her behalf of not guilty by reason of insanity. This is known as an insanity defense. An insanity defense is an affirmative defense. In an affirmative defense, the defendant does not dispute the facts of the case but presents a reason why he or she is not legally guilty of the offense and should not face the legal consequences.

Given Mrs. Yates's medical history, her attorneys' choice to enter this plea is not surprising. However, insanity defenses very rarely succeed. They are used in just a small fraction of criminal cases - well under five percent - and they fail about 75 percent of the time. Defense attorneys explain that juries do not like insanity defenses. Jurors often believe that a defendant using an insanity defense is simply trying to get away with the crime or make excuses.

Another issue for defendants using the insanity defense is the often extremely narrow legal definition of insanity. It's not enough to show that a defendant is mentally ill. Many states, including Texas, use a definition called the M'Naghten Rule. The M'Naghten Rule essentially means that a person must be so impaired mentally that she does not understand that what she is doing is wrong. In Texas, the defendant must also meet the irresistible impulse test, which means that the person was unable to control his or her actions.

At trial, the prosecution argued that while Mrs. Yates was mentally ill, she knew her actions were wrong. The defense argued that Mrs. Yates was so out of touch with reality that she genuinely believed she was saving her children from Satan's grasp and an eternity in hell.

Woroniecki, a non-denominational preacher, taught religious concepts that many would find harsh and strange. He frequently threatened the fires of hell. In his preaching, salvation from hell was elusive and difficult to achieve, and children were at risk of hell if their parents didn't teach them adequately.

Rusty and Andrea Yates were such devotees of these beliefs that they emulated Woroniecki's lifestyle, buying a 350-square foot bus to live and travel in with their young children. Eventually, their families intervened and the Yates family moved into a house, but Mrs. Yates in particular was still very much influenced by Woroniecki's beliefs.

Outcomes of the Yates Trials

Since there was no dispute over the fact that Andrea had caused the deaths of her children, the trial focused instead on the issue of insanity. The key prosecution witness, Park Dietz, claimed that while Andrea was mentally ill, she still knew that killing her children was wrong and thus was not legally insane. A consultant for the popular TV series Law & Order, Dietz made a statement regarding Mrs. Yates having seen an episode of the show in which a mother drowned her children in a bathtub. However, no such episode had ever aired. Dietz later confirmed his error, but the trial judge did not permit a mistrial.

Defense expert witnesses testified to the severity of Mrs. Yates's illness and gave their opinions that she had not believed her actions were wrong; she believed she was saving her children for eternity. Andrea Yates was so ill that she was reluctant to participate in her own defense. However, she finally shared that she felt that she had failed as a mother, that her children were not developing properly, and that she had killed them so that they would not fail on the road to salvation and spend an eternity in hell. The jury believed the prosecution, convicting Mrs. Yates of first-degree murder. However, they recommended life in prison over the death penalty.

In 2005, an appeals court ruled that the trial judge had erred by allowing the incorrect testimony from the key prosecution witness to remain on the record. Mrs. Yates was granted a new trial. With more information available regarding the diagnosis of postpartum psychosis, Mrs. Yates was found not guilty by reason of insanity. She was committed to a psychiatric facility for treatment. Although her case comes up at times for re-evaluation, most legal experts believe she will remain in the facility for life.

Convicted in 2002 of murdering her children, Andrea Yates appealed in 2005 on the grounds that a key prosecution witness had given false testimony. The appeals court vacated her conviction and granted her a new trial. In her second trial, Mrs. Yates was found not guilty by reason of insanity. The second jury believed that she was psychotic at the time of the killings. This case brought significant attention to the mental health issue of postpartum depression, which is not uncommon, and the rare but serious issue of postpartum psychosis.