Androcentrism is the perspective emphasizing the masculine role or features, often elevating the male view as the norm. Explore an example of androcentric bias in research, and an overview of the historical relationship between androcentrism and psychology. Updated: 12/07/2021
Create an account

Androcentrism refers to perspectives concerned with masculinity or men to the exclusion of other perspectives. The opposite of androcentrism, which occurs when the feminine point of view is emphasized over another, is called gynocentrism. Androcentric bias occurs when one makes the assumption that the male view is the norm for all people. 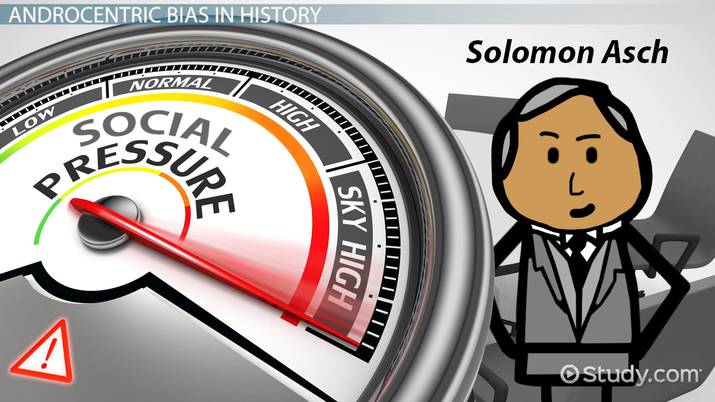 Try it now
Back
Coming up next: The One-Drop Rule in American History

A Look at Androcentric Bias

Tom is a researcher interested in studying romantic relationships. He conducts a study that asks each participant to rate characteristics he or she looks for when choosing a partner. Here is the study questionnaire:

Four hundred males and forty females complete Tom's study. He finds that 75% of the males chose physical appearance as the most important characteristic. The women were evenly split among their preferences - primarily finances, a family-oriented demeanor, and emotional openness. In fact, 33% of the women selected each of the three on their questionnaires. Tom analyzes his research findings and concludes that when men and women choose a romantic partner, physical attraction is the most important factor. This is an example of an androcentric bias.

So why is Tom's conclusion androcentric? After all, a majority of the 440 participants did choose physical appearance as the most important characteristic. However, consider the following: 400 of the participants were male. This means that less than 10% of the research participants were women. Given that Tom wants to use his research study to draw conclusions about men and women, he should have included more women in his research study to gain a more balanced understanding of what people look for in mates. Tom concluded that both men and women find physical appearance as the most important trait; however, this conclusion was only true for the men surveyed. The women preferred three other traits. Tom's conclusion does not accurately reflect the women's choices, but he gave his results as if they were true for everyone.

In 1899, the psychoanalyst Sigmund Freud, widely considered to be the founder of psychoanalysis, proposed a theory known as the Oedipus complex. The theory states that boys have a strong desire to sleep with their mothers and kill their fathers. This view is androcentric because it focuses only on a masculine perspective and excludes all others. It should be noted that later Freud's colleague Carl Jung developed a parallel and gynocentric theory known as the Electra complex.

In the early 1950s, psychologist Solomon Asch conducted an experiment on group conformity. He found that a surprising number of people have the tendency to by swayed by social pressure in decision-making. Though his research participants were all male, Asch presented his results as if they accurately reflected the behavioral tendencies of both men and women, a decidedly androcentric view.

In the late 1950s, psychologist Lawrence Kohlberg used 58 male participants in a study about moral dilemmas. He created his famous theory of moral development based on the study, claiming his conclusions represented moral development in both males and females, although this was clearly inaccurate.

Androcentrism occurs when people emphasize masculine perspectives while excluding others. Gynocentrism is the opposite of androcentrism and involves an emphasis on female perspectives over all others. When one assumes that the male point of view and experience is the norm for both women and men, he possesses an androcentric bias. An example of androcentric bias is using all male participants in a research study and concluding that the results of the study are true for both women and men.

Gender Gap Overview & Examples | What is the Gender Gap?

Patriarchy Overview & Examples | What is a Patriarchal System?

Gender Gap Overview & Examples | What is the Gender Gap?

Patriarchy Overview & Examples | What is a Patriarchal System?