The body plans of animals have different classifications and features that are affected by various factors. Learn about body plans, the types of body symmetry, body cavities and tissues, and locations of body structures. Updated: 10/05/2021
Create an account

What Are Body Plans?

If you stop and think about it, you can probably come up with a long list of the different types of animals found on Earth. But there are so many more than that! I bet there are some that you have never even heard of or didn't even know were considered animals.

The diversity of animal life on Earth is indeed quite vast. Fortunately, there are ways to make sense of it. We do this by classifying animals based on certain body structures as well as how those body structures are combined to make a whole animal. 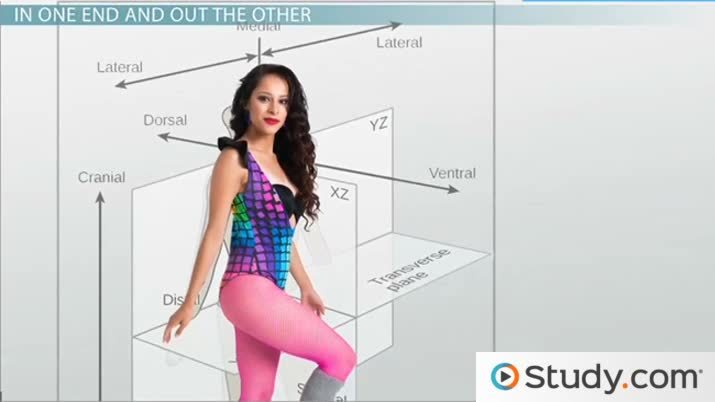 Coming up next: Parazoa: Definition and Characteristics

You know what else has bilateral symmetry? That crayfish from before! But don't worry, you still aren't going to turn into one any time soon. As we go on, you'll see that despite these similarities, there are important differences between us.

Symmetry is important in animal function, and it tells us quite a bit about the animal's lifestyle. Animals with bilateral symmetry tend to have their brains, mouths and other sense organs (like eyes and ears) up in their heads. This allows them to have mobility - the head goes through the environment first with the eyes and ears ready to take in all of the activity around them.

In contrast, radially symmetric animals are designed for a sedentary lifestyle. Because they are the same on all sides, they're ready for whatever comes at them - no matter the direction of attack!

Another important feature that differentiates animals is whether or not they have a true body cavity, called a coelom. This is a space between the body tissues and internal organs, and it allows for independent movement and growth of those organs. In animals that don't have a coelom, the internal organs are attached to the tissues of the body wall, so they are not independent.

Of course, some animals also fall somewhere in between. These animals have a pseudocoelom, which is a body cavity not completely lined by tissue. Pseudocoeloms work just like true coeloms, even though this name meaning 'false cavity' may suggest otherwise.

Most bilaterally symmetrical animals (including us) are coelomates. Animals, such as roundworms, fall into the pseudocoelomate group, while other worms, such as flatworms, do not have a coelom at all.

In addition to body cavities, we can also differentiate animals by whether or not they have true tissues. Animals that have true tissues are known as eumetazoans. What this means is that they have body tissues that are specialized, like cells that specifically form muscle, ligaments and different organs. You can see how this is an important way to differentiate animals from one another.

Location, location, location! The location of an animal's body structures is by far one of the most important factors, so we need to be able to describe it appropriately.

Think of it as trying to describe a car. If you just say 'right side,' 'left side,' 'front' or 'back,' you are likely going to create more confusion than not. The right side could be either side, depending on where you are standing. So instead, we say 'driver's side' and 'passenger's side,' making it perfectly clear which side of the vehicle we're referring to.

An animal's body plan is no different. Saying 'right,' 'left,' 'up' or 'down' leaves much open to the viewer's interpretation, so instead we have more descriptive terms that clearly describe the location.

For the back of the animal, we use the term dorsal. You can just think of a shark's dorsal fin, and I bet you won't have difficulty remembering this one! Opposite from dorsal on the front side is called ventral. This is where your mouth and nose are located, which can also be thought of as your breathing 'vents.'

In One End and Out the Other

Remember how I promised you that you are in fact very different from a crayfish? Here's your proof! Crayfish are protostomes, while you are a deuterostome. So even though you both have bilateral symmetry, you both have legs and you both have true coeloms, there is no doubt you are different because this classification is so important that it trumps all the other ones!

The animal kingdom is a diverse and complex set of organisms. There are so many different types of animals on Earth that it would take you a long, long time to list them all. Because of this, it's important to organize such diversity appropriately. One of the best ways to do this is by classifying animals based on their body plans. This is the combination and organization of an animal's body structures.

Understanding body plans helps us see how even though some animals may share certain features, they can in fact be quite different. We use an animal's symmetry, body cavity, tissue type, structure location and embryonic development to classify it, which helps us understand not only that animal's role in the ecological world, but also how it may or may not be related to the many other animals it shares the Earth with.

Fishes and Sharks: Origins of Jaws in Vertebrates

Symmetry in Animals Types & Importance | What are Symmetrical Animals?