Did you know there are clones all around us? That's something many people don't realize. So what exactly are clones? This lesson investigates cloning, types of clones, and cloning's connection to extinct animals.
Create an account

Cloning is when genetically identical copies of living organisms are produced. Never thought about bacteria as clones? That's okay, most people haven't. Now, let's expand your knowledge by investigating how clones are made.

Two basic types of cloning are possible. The first is natural cloning, and the second is artificial cloning. For the purposes of this lesson, we'll address each separately. 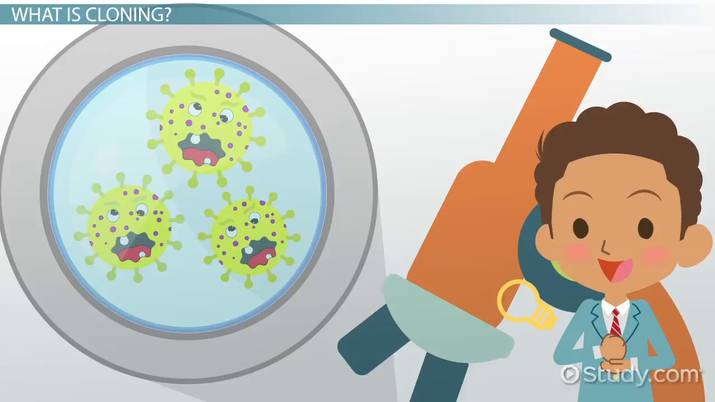 Natural cloning is seen within organisms such as the bacteria mentioned above. Yet, this is only one example. Bacteria are part of a larger group of organisms that reproduce asexually. Asexual reproduction is when organisms reproduce without a partner.

Even identical twins are actually clones of each other. These twins are produced when a fertilized egg splits, thus creating two separate embryos that develop independently of one another. Each embryo is a genetic replica of the other, making them natural clones.

Artificial cloning is when scientists create genetic replicas of organisms in ways that would not occur in nature. This is the stuff of science fiction but also science fact. A classic example of this process is when Dolly the sheep was cloned in 1996. Dolly was created using a somatic cell from her mother. A somatic cell is a mature body cell, such as skin, hair, or in this case, udder. Here are the highlights for how it worked:

Dolly isn't the only animal clone out there. In addition to her, bacteria, mold, fungi, mice, cows, chickens, cats and dogs, deer, horses, mules, oxen, rabbits, and monkeys have been cloned.

In the case of extinct animals, cloning has only limited potential. Animals such as mammoths have provided us with DNA. However, that DNA isn't complete enough to produce a clone. Despite popular imagination, DNA simply doesn't remain intact over thousands of years. It degrades and breaks into pieces. So while scientists are able to reconstruct the genetic code on paper, they don't have viable enough cells with DNA to clone an actual animal.

This story holds true for most extinct animals. Sadly, scientists are unlikely to ever resurrect authentic animals from bits of recovered DNA. However, attempts have been made to clone recently extinct animals. One such example is the Pyrenean ibex.

The Pyrenean ibex became extinct in the year 2000, but cells from the last living individual were harvested prior to the animal's death. These cells were later used in a cloning attempt. Using nuclei from the ibex's cells and egg cells from a closely related living animal, a cloned calf was created and born during 2003. Sadly, however, due to a lung defect, the calf died shortly after birth. Subsequent efforts were unsuccessful.

Today, scientists are assessing the viability of the remaining ibex's cells. These cells have been frozen for over a decade and some questions exist about their usability for cloning purposes. The bottom line is, while the idea of creating clones from cells of recently extinct animals exists, the scientific ability to enact such ideas is still developing. At this point, cloning extinct animals remains unlikely.

Clones are organisms with the same exact genetic makeup as their parents. Organisms like bacteria, mold, fungi, starfish, and some nonflowering plants can be cloned naturally through asexual reproduction; that is, without a partner or any genetic recombination.

Artificial clones, like Dolly the sheep, are created using the somatic cells from a donor animal. Somatic cells are body cells that contain the complete genetic make-up of the animal. The nucleus, containing the DNA, from these cells is removed and then injected to the egg cell of a surrogate mother. People have hypothesized that cloning could be used to resurrect extinct animals. However, attempts at creating authentic clones from extinct animals have remained unsuccessful due to DNA breakage over time.

Senescence & Aging | What is Senescence?