Anne Bradstreet was the first published female poet in New England and is widely considered to be the first American poet. Discover Anne Bradstreet's life, her Puritan ideology, and two of her most prominent works, 'Verses upon the Burning of our House,' and 'In Honour of that High and Mighty Princess, Queen Elizabeth.' Updated: 08/25/2021
Create an account

Anne Bradstreet was a famous poet from the 17th century. She is the first American poet and the first female poet to be published both in England and America. Bradstreet was born in England, where her father worked as an administrator for an earl. Her parents made sure that she was educated while growing up, more so than most women of the time. She met and married Simon Bradstreet and then moved to America in 1630, along with Simon and her parents.

The Bradstreets moved to what is today Massachusetts. Later, both her father and husband would be governors of Massachusetts, and they were instrumental in founding Harvard University.

Like many of the other settlers in the area, Bradstreet belonged to a devout Protestant community called the Puritans. Among other things, the Puritans believed in predestination, or the idea that God controls the world and the people in it. Every situation, good or bad, was seen as being part of God's plan. Let's take a look at two of Bradstreet's poems and how her religious beliefs informed her writing. 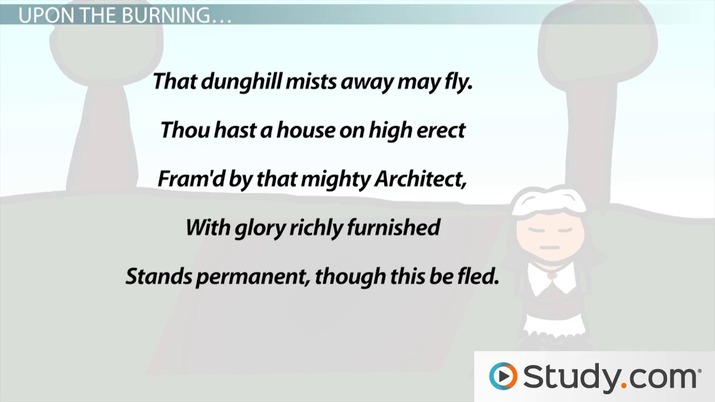 Coming up next: Phillis Wheatley: African Poetry in America

One of Bradstreet's most famous poems is called 'Verses Upon the Burning of our House'. As you might have guessed from the title, this particular poem was written after a fire destroyed the Bradstreets' house in 1666, leaving them with no home and no possessions.

The poem is very long. It begins with a description of Bradstreet waking up to a fire. She escapes and then turns to look at the house as it burns. As she watches all of her belongings go up in smoke, she writes:

And when I could no longer look,

I blest His grace that gave and took,

That laid my goods now in the dust.

It was His own; it was not mine.

Far be it that I should repine,

But yet sufficient for us left.

Notice that, at a point when she loses all of her worldly possessions, she clings to her faith. She even says that she blesses God's grace and comforts herself with the idea that the belongings now burning belong to God, not to her. Of course, being human, Bradstreet does feel some grief. Later in the poem, she talks of going back to the scene of the fire later and being upset when she thinks about all she's lost. Yet she reminds herself:

Then straight I 'gin my heart to chide:

And did thy wealth on earth abide,

The arm of flesh didst make thy trust?

Raise up thy thoughts above the sky

That dunghill mists away may fly.

Thou hast a house on high erect

Fram'd by that mighty Architect,

Stands permanent, though this be fled.

Here, she's telling herself that her earthly possessions are not nearly as important to Bradstreet as the riches that she'll encounter in Heaven. In fact, she says her earthly house is nothing compared to the house in Heaven that is waiting for her, having been built by 'that mighty Architect,' God.

As you can see, Bradstreet's faith played a key role in troubling times like when she lost her house. This was common among Puritans, whose belief in predestination meant that they were able to face hard knocks with the faith that it was part of God's plan.

Another part of the Puritan belief system that is part of this poem is a focus on the unimportance of earthly goods. Life in 17th century America was difficult at best, and the Puritans believed that luxuries and possessions were obstacles that kept one from Heaven.

However, there were some negative aspects of Puritan faith. Women were not treated as well as men. They were expected to serve the men in their lives and were sometimes kept from education. Despite her faith, Bradstreet acknowledged the problems with Puritanism. In a famous poem titled, 'In Honour of that High and Mighty Princess, Queen Elizabeth', Bradstreet attacks the Puritan belief in the inferior nature of women by singing the praises of Queen Elizabeth I of England.

Now say, have women worth, or have they none?

Or had they some, but with our Queen is't gone?

Nay Masculines, you have thus tax'd us long,

But she, though dead, will vindicate our wrong.

Let such as say our sex is void of reason

Know 'tis a slander now, but once was treason.

Anne Bradstreet was America's first poet and the first female poet to be published in both the Old and New Worlds. Her Puritan faith informed much of her writing, though sometimes in very different ways. In 'Verses Upon the Burning of Our House', she depends on her faith to get herself through the hardship of losing all of her worldly possessions. But, she also criticizes the Puritan belief in the inferior nature of women in her poem 'In Honour of that High and Mighty Princess, Queen Elizabeth'.

Mary Rowlandson's A Narrative of the Captivity: Summary and Analysis

The Author to Her Book: Summary & Analysis