In Anne Frank's 'Diary of a Young Girl', Peter is the only teenage boy Anne sees in the two years their families are in hiding. Although in many ways they seem an unlikely pair, their situation kindles a romance between them.
Create an account

Do opposites really attract? Anne Frank had only one big crush prior to going into hiding, and that boy was like her: attractive, vivacious, funny, and outgoing. The only boy in the annex, Peter van Daan, is the complete opposite: shy, sensitive, awkward, and complacent. However, they are both in their early teens, experiencing feelings towards the opposite sex for the first time, and trapped together. Let's find out more about the relationship between Anne and Peter in Anne Frank's Diary of a Young Girl. 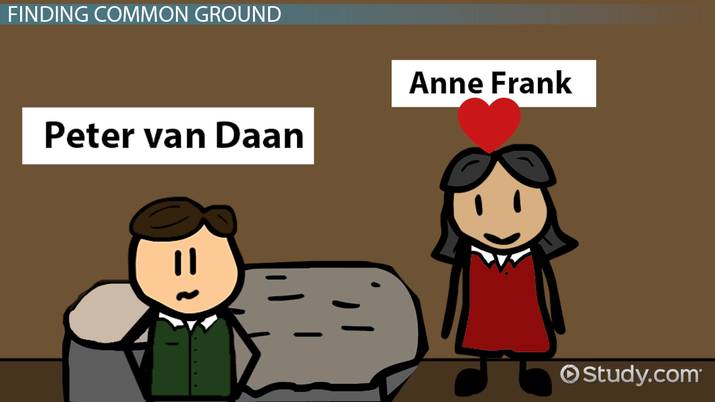 Coming up next: Mrs. Van Daan in Diary of a Young Girl: Quotes & Personality

When Anne first comes to the annex, she can't stop thinking about Peter Schiff, a boy that she spent a lot of time with one summer before he decided Anne was too young for him. Still, Anne is convinced it is true love and that they will someday be together. Anne writes, 'I love Peter as I've never loved anyone, and I tell myself he's only going around with all those other girls to hide his feelings for me.'

Anne doesn't think twice about Peter van Daan, the sixteen-year-old boy that moves into the annex with his parents. Anne sums him up as '…a shy, awkward boy whose company won't amount to much.' At times it seems as though she doesn't even like him, referring to him as a lazy, obnoxious dope.

She feels sorry for him because his parents argue constantly, and they have a propensity towards physical and emotional abuse towards Peter, but his hypersensitivity and constant complaints about health issues are irritating.

Over time, Anne learns to tolerate him, but still, she doesn't like him. Peter starts to think of Anne like a sister, but Anne doesn't feel the same way. Peter is shy and hard to get to know, so it appears they have nothing in common.

When Anne discovers that Peter likes to dress up as much as she does, she develops a fondness for his sense of humor. Anne writes, 'One evening we made our appearance, with Peter in one of his mother's skin-tight dresses and me in his suit. He wore a hat; I had a cap on. The grown-ups split their sides laughing, and we enjoyed ourselves every bit as much.'

When Anne's loneliness becomes almost more than she can bear, she realizes that she needs to form a relationship with Peter. Anne begins to find excuses to hang out in Peter's room. Anne's feelings for Peter begin to grow, and she suspects that his are growing, also, but Peter's shyness means that admitting their feelings is going to be a slow process. Patience is not one of Anne's greatest qualities, but the two become very close friends who talk about everything, even sex, without feeling uncomfortable.

Peter admires that Anne is '…never at a loss for words: you say exactly what you want to say and aren't in the least bit shy.' Anne admires that Peter is willing to humble himself for the sake of peace, even when he knows he's right.

In Anne's mind, 'Peter Schiff and Peter van Daan have melted into one Peter, who's good and kind and whom I long for desperately.' This passage leaves the reader wondering if it is Peter van Daan that Anne cares about, or if she needs a surrogate for the person she really wants to be with.

Is He Really What She Wants?

Just as Anne is about to give up on the idea that a boy like Peter '…who loves peace and quiet' could love a girl like Anne, who is energetic and noisy, Peter begins to show some affection. Anne writes '…when Peter and I are sitting close together on a hard wooden crate among the junk and dust, our arms around each other's shoulders, Peter toying with a lock of my hair…'

Eventually, a romantic relationship begins, but Anne is realistic enough to know that he is not the man she wants to marry someday. 'Peter still has too little character, too little willpower, too little courage and strength. He's still a child, emotionally no older than I am; all he wants is happiness and peace of mind.'

When they tell Anne's father, he worries that the situation of them living together in the annex could result in things getting too serious. Mr. Frank believes that Peter is a good person, but agrees with Anne that he does not have strength of character.

Peter is easygoing and cooperative, but Anne worries that he is becoming too reliant on her. Peter's inferiority complex, and the fact that he doesn't have any goals in life, bother Anne. She begins to realize that '…he was my conquest, and not the other way around. I created an image of him in my mind, pictured him as a quiet, sweet, sensitive boy badly in need of friendship and love!'

The reader is left with the impression that Anne is reconsidering her feelings for Peter, but will never know what might have been because they are discovered and arrested. Both Anne and Peter die in concentration camps in the Spring of 1945.

When Peter van Daan first arrives at the annex, Anne thinks very little of the awkward, shy boy. He is nothing like Peter Schiff, Anne's crush. While they are very different, Anne's need for company, coupled with Peter's need for love, grows slowly into a relationship. When Anne is not sure how Peter feels about her, she gets frustrated, but eventually, her patience pays off and they become more than friends. Anne's father worries that the situation will cause their relationship to move forward at a greater intensity than is normal. Anne begins to realize that although Peter is a good person, he doesn't have the strength of character that she wants in her marriage partner someday. We will never know how this story would have ended because they are both arrested and sent to concentration camps. Neither of them survive.