Margaret has taught both college and high school English and has a master's degree in English from Mississippi State University. She holds a Mississippi AA Educator License.

Anne Frank's 'Diary of a Young Girl' depicts many characters encountered by Anne while avoiding Nazi capture. Analyze the traits and vivid characterization of the Secret Annex residents: The Franks, the van Daans, Mr. Dussel, and the helpers. Updated: 01/03/2022
Create an account

It is only natural that Anne Frank's diary would focus on the people in her life. After all, Anne is isolated from the outside world when her family goes into hiding to avoid capture by the Nazis. This isolation gives her plenty of time to study the idiosyncrasies of those around her, and Anne's vivid characterizations, or how a character in a story is described, draw readers into the claustrophobic setting of the Secret Annex. 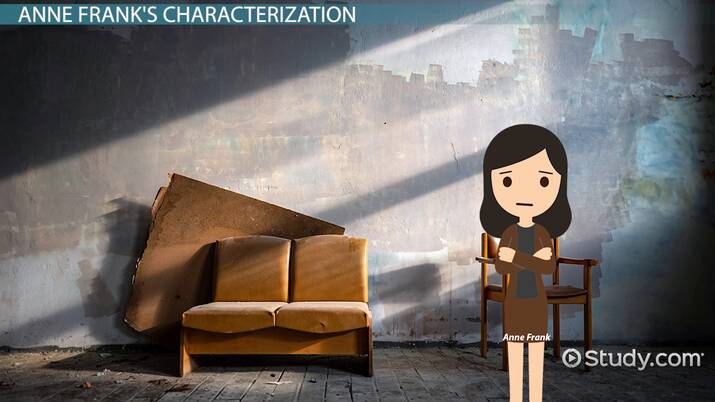 Try it now
Back
Coming up next: Otto & Anne Frank Relationship in Diary of a Young Girl

As the Frank and van Daan families move into the Secret Annex, two types of personalities emerge: the modest and the straight-forward. Edith Frank believes that the residents of the Secret Annex can be divided into two groups: 'My husband, Margot, and Peter are all exceptionally modest. (Mr. van Daan), Anne, and I, though not exactly the opposite, don't let ourselves be pushed around.'

Anne Frank, author of Diary of a Young Girl, who addresses the diary entries to Kitty, describes life in Nazi-occupied Amsterdam during World War II. Jewish families, including her own, are forced to hide from or flee the Nazis. Her family and one other live in hiding in the Secret Annex, an abandoned part of her father's workplace.

Otto and Edith Frank have two children: thirteen-year-old Anne and sixteen-year-old Margot Frank. Margot is a studious young girl who seems a bit less outgoing than her vivacious sister Anne.

Anne's diary entries depict her father, Otto, as a studious man who spends his free time learning languages and reading the works of Charles Dickens. Anne is close to her father and often has straightforward conversations with him about love, sex, and life.

Edith Frank and her daughter Anne, on the other hand, are not as close. Edith is closer to Margot. Anne wishes for a warmer relationship with her mother, but they are never able to connect as well as Anne and her father. Nevertheless, Edith is not a cruel woman, and she treats the other residents of the Annex better than they treat her. She reads a great deal to pass the time, and she tries to learn English alongside her husband.

The van Daan Family also occupy part of the Secret Annex. Peter van Daan is the fifteen-year-old son of Mr. and Mrs. van Daan. Although at first Anne thinks Peter is painfully shy and awkward, Anne eventually confesses to her diary that she's falling in love with Peter because of his quiet manner. Eventually Otto Frank becomes concerned about the amount of time Anne spends with Peter. Though Anne is angry with her father at first, she eventually accepts his advice and begins spending less time in Peter's room.

Anne sees Mrs. van Daan as something of a comic figure. When the van Daans move in, Anne describes the spectacle of Mrs. van Daan's arrival. 'Much to our amusement, Mrs. van Daan was carrying a hatbox with a large chamber pot inside. 'I just don't feel at home without my chamber pot,' she exclaimed, and it was the first item to find a permanent place under the divan.'

Anne often depicts Mrs. van Daan as argumentative and stingy. For example, all the residents of the annex typically share the food, but Mrs. van Daan sometimes hides extra food for her family. Mrs. van Daan frequently criticizes the Franks' childrearing strategies, a trait that particularly annoys Edith Frank. Like his wife, Mr. van Daan is demanding and critical. Anne says that he needs cigarettes to keep him civil and manageable.

When the Franks and van Daans decide to allow one more person to move into the annex, they select a dentist named Mr. Dussel. Mr. Dussel annoys Anne with his strict schedule for using the desk in their shared room. She characterizes him as quietly tyrannical and dismissive of her. He's useful, however, when the residents are plagued with dental problems.

Several of Otto Frank's co-workers assist the residents in the Secret Annex. Miep Gies, a secretary at the company, and her husband Jan frequently visit the annex. Anne and Margot particularly look forward to days when Miep can join them for lunch and bring news of the outside world. Some of the company's other employees also help the annex residents by bringing groceries, books, and other items.

Let's take a few moments to review what we've learned about the characterizations made by Anne Frank in her Diary of a Young Girl. Anne Frank's story reveals much about the characters Anne encounters in the Secret Annex, but it reveals even more about Anne Frank, thanks to her characterizations, or how characters in a story are described. Anne Frank spends most of World War II in hiding with her parents, Edith and Otto Frank, and her sister, Margot Frank. There are other residents of the Secret Annex as well, including the van Daan family. This courageous young girl's diary allows readers a look at life in hiding, and the diary's vivid characterization of the people in Anne Frank's life makes for compelling reading.

The Diary of a Young Girl by Anne Frank | Summary & Impact

The Diary of a Young Girl by Anne Frank | Summary & Impact