Anne Frank went into hiding with her older sister, Margot, during the Holocaust. Learn more about the evolution of their relationship and the similarities and differences in the sisters' personalities, as portrayed in 'The Diary of a Young Girl'. Updated: 01/04/2022
Create an account

The Diary of a Young Girl

In The Diary of a Young Girl, Anne Frank and her family go into hiding to evade the Nazis during the Holocaust. They hide in the secret annex, which was a room built onto the back of Anne's father's office. They were there for two years, living with another family, the van Daans, in very cramped quarters and with a dwindling food supply. This environment created a lot of conflict between the families and within the families. 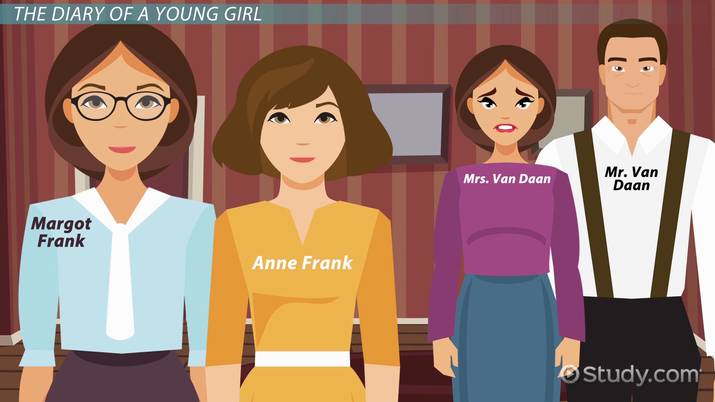 Try it now
Back
Coming up next: Peter Van Daan in Anne Frank's Diary of a Young Girl

Anne is spunky and confident, in a way that many younger girls usually are not. She knows she is smart, and she is willing to speak her mind, even if that turns into an argument. Anne is also more independent and desirous of time alone; she works out her fears and frustrations in her own head or on paper, instead of with her family.

Margot is almost the opposite of Anne: she is quiet and well mannered. She has a wonderful relationship with her mother, and they're very close. She tends to gravitate towards her family and gets lonely if left alone too long. Others see Margot almost as a non entity, so quiet that many didn't even realize she was there.

Anne and Margot Before

Before the war, Anne and Margot were regular sisters, bickering at times, but mostly amiable. Because they were three years apart, their lives only intersected at school, but not much. Margot did exceptionally well in her courses, and Anne, although smart on her own, wanted to do better.

Their care for each other was obvious, though, the moment that Margot realized she received a call up notice, which was the note calling someone to report to a concentration camp for labor. Anne became very emotional and scared for her sister. 'Margot told me that the call-up was not for Father, but for her. At this second shock, I began to cry. Margot is sixteen - apparently they want to send girls her age away on their own.'

Anne and Margot in Hiding

While in hiding, Anne and Margot's relationship changes. While Margot struggles with living in hiding, becoming even more withdrawn, Anne works hard and tries to live with hope, frustrating everyone. Margot's quiet manner and Anne's capricious manner are even more starkly different in this annex. Anne feels completely alone, because her mother favors Margot's more somber behavior over Anne's hopeful confidence. This puts a split between Anne and Margot. Anne says 'I don't get along with Margot very well either.'

One of their tensest moments as sisters was over Peter van Daan, the 16-year-old son of Mr. and Mrs. van Daan, the other family hiding with the Franks. Peter and Anne become close, alienating Margot, which causes the sisters some grief. 'The situation is this: I'm not jealous of either you or Peter. I'm just sorry I haven't found anyone with whom to share my thoughts and feelings, and I'm not likely to in the near future.'

Anne notices their differences, as well. 'Margot doesn't need it, since she's naturally good, kind and clever, perfection itself, but I seem to have enough mischief for the two of us.' Yet for all their challenges in hiding, Margot tries her best to support Anne when Anne gets scared and is honest about how she feels with her sister.

Anne and Margot are sisters, but their personalities are very different. Margot is quiet, and Anne is confident and loud. The two opposite sisters find themselves at odds with each other at times but still have love for one another. Before the war, Anne and Margot were classic kids - argumentative and a little petty - but they became even more tense and frustrated with each other in hiding. Yet, they also develop a deeper and richer relationship as they both grow up in such close quarters.