In this lesson we will learn who Anne of Cleves was. Together, we will take a closer look at her history and her personal life. Her marriage and eventual annulment with King Henry VIII with be looked at in detail.
Create an account

Anne of Cleves was the Queen of England from January 1540 until July 1540 and was the fourth wife of King Henry VIII. Their marriage was annulled on a legal technicality, and she was thereafter referred to as the 'King's Beloved Sister.' 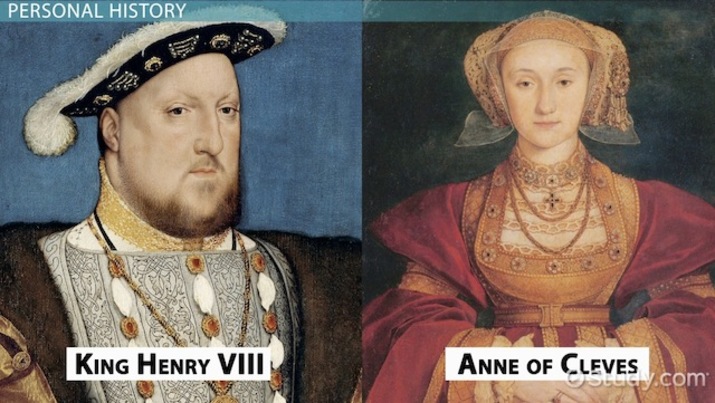 Coming up next: The Edict of Nantes in 1598: Definition & Revocation

Anne of Cleves was born in September 1515 in Germany. Several of her siblings were Protestant and her mother was a strict Catholic. Therefore, her family was considered unaligned religiously. King Henry VIII was urged into a marriage with Anne by his chief minister, Thomas Cromwell. In that era, England was concerned with papal-run countries taking control. Therefore, Cromwell believed that a marriage between the King and Anne would solidify an alliance with a non-papal Protestant Germany and a Catholic England.

Anne had received no formal education but was able to read and write in German. The fact that she was not an intellectual nor had any interest in books or music was a massive disappointment to the King. However, she was considered even-mannered and virtuous, which were qualities the King respected. The King's most trusted painter, Hans Holbein the Younger, was sent to paint a picture of Anne for the King to review. After viewing the painting, a marriage contract was signed by proxy in October 1539.

The King had been told she was pretty and had viewed the painting. The two met in person for the first time on New Year's Day in 1540 when she arrived in England. He dressed up in disguise and went into her bedroom and kissed her. Anne showed little interest in him, due in part to not knowing that it was the King. The two were formally introduced a few days later with a reception outside Greenwich Park, England. After these two visits he claimed he had been misled and found her appearance disappointing. The King tried multiple times to back out of the contract; however, it was believed that this would be illegal and harm an alliance with Germany.

After their wedding, the King refused to consummate the marriage based on his dislike of her appearance and claims that he was unable to believe she was a virgin. However, an annulment based on dislike of appearance was not a valid legal reason. Anne had been briefly promised in marriage to Francis, Duke of Lorraine, when she was in her early teens; despite the fact that the betrothal had been called off, this was used as the basis for saying that the marriage between the King and Anne had been legally invalid from the beginning and should therefore be annulled.

Anne consented to the annulment of her marriage to the King in July 1540. In exchange for her consent, she was given a generous settlement, including numerous castles and properties, and was given preferential treatment. Additionally, she was to be known as the 'King's Good Sister' and was to enjoy precedence over all the women in England except the Queen and King's daughters. Cromwell, who had introduced the two, was executed a few days after the annulment.

She lived out the rest of her days in England. She never remarried nor did she ever bear any children.

She often visited Henry's court as an honored guest. She had few vices with the exception of the occasional gambling outing. When she died in July 1557 of medical issues, she was the last of King Henry VIII's six wives to die and was the only wife buried in Westminster Abbey.

Upon modern-day reflection, it is believed Anne of Cleves died of cancer.

Anne of Cleves has been the subject of numerous books, three biographies, and several movies. As previously noted, the artist Hans Holbein the Younger had been dispatched to paint the portrait of Anne in 1539. Two versions of his portrait exist: one in the Musee du Louvre in Paris and the other in the Victoria and Albert Museum in London.

Anne of Cleves lived out the rest of her days in England. She never remarried nor did she ever bear any children.

Henry VIII Wives in Order | How Many Wives Did Henry VIII Have?