The antagonist is the opposing force to the protagonist in a given story, and can be presented as tangible or intangible. Analyze characters and forces in several famous works that demonstrate the role and purpose of antagonists in literature. Updated: 10/13/2021
Create an account

The antagonist is the opposing force in a story. It could be a human enemy, or it could be non-human, like an animal or something less tangible, like fear. The antagonist plays an important role in story development. Think about a favorite movie you like to watch. If there is conflict in a story or movie, it's because there is some sort of antagonist. The protagonist in the story is seeking resolution; the antagonist resists such resolution, but all good stories need antagonists. 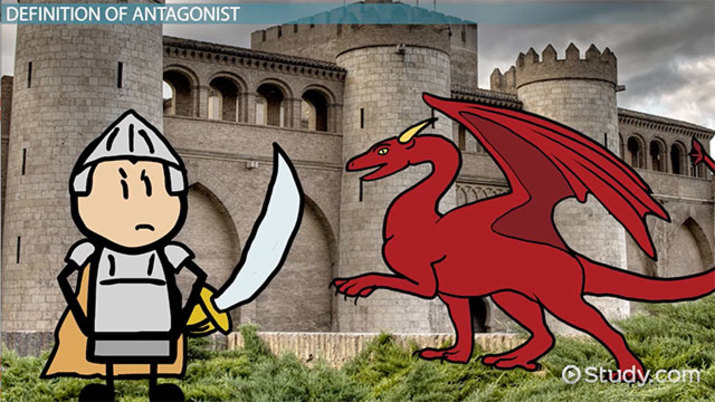 Let's take a look at examples of antagonists in some familiar literary works.

First, we will examine the character Jack in Golding's famous dark novel Lord of the Flies. Because we are only examining certain characteristics of antagonists, we will not go into too much detail as far as the entire plot of the story. In Lord of the Flies, a group of adolescent British boys crash lands on a deserted island. Although the island looks like a tropical paradise, it soon becomes clear that it is the complete opposite. Golding wishes to refute the idea of the noble savage, i.e., that environment alone corrupts an individual. He wants to illustrate the mysterious struggle of the potential of evil within human beings.

The protagonist, Ralph, is fairly democratic. He wants to meet in groups, vote, and make decisions. His antagonist is Jack, who is the exact opposite. Jack is like a dictator who wishes to control everything and everyone, often cruelly. Due to the nature of their ruling styles, we see the conflict almost right away. In the end, Ralph is frantically hiding from Jack because he knows Jack will kill him if he gets the chance. In the end, the antagonist causes Ralph to come of age; he loses some of the innocence he had before his conflict with Jack.

Next, let's take a look at The Old Man and the Sea

The second antagonist we'll examine is entirely different from Jack. In fact, it is a group of sharks. In Hemingway's novel The Old Man and the Sea, we see Santiago, a very old, poor fisherman battling the largest marlin he's ever caught. For some days, the marlin drags Santiago around the ocean, but Santiago never relents. At first glance, it seems that the marlin is the antagonist, but Santiago feels kinship with this great fish. In some ways, the marlin represents Santiago and his struggles.

But before Santiago can get the marlin home to sell at the fish market, the great fish is attacked by sharks - more than once! Santiago even punches one of the sharks, which is impressive. The sharks eagerly bite and eventually devour the marlin, leaving nothing but a ghastly skeleton for the other fishermen in the village to see. In some ways, the sharks represent the extreme poverty and difficulties Santiago has faced in his lifetime.

For another example of an antagonist, we can look to Macbeth

Finally, we'll look at 'The Tell-Tale Heart' for an example of an intangible antagonist.

In Edgar Allan Poe's short story 'The Tell-Tale Heart,' it could be argued that the main character's own guilty conscience is, in fact, the antagonist. Although the main character murders an old man because he is appalled by a cataract in the old man's eye, it is this internal antagonist, guilt, that plagues the murderer until he cannot stand it anymore. In fact, he's certain he hears the old man's heart beating more and more loudly. In a burst of insanity, he shows the police where he has buried the body under the floorboards.

The antagonist is the opposing force in a story. It could be a human enemy, or it could be non-human, like an animal or something less tangible, like fear. The antagonist plays an important role in story development. If there is a conflict in a story or movie, it is because there is some sort of antagonist. The protagonist in the story is seeking resolution, while the antagonist resists such resolution.

Review of the Types of Antagonists

Upon completion of this lesson, you should be able to define antagonist, understand the importance of antagonists in a story, and list some examples of antagonists.

Character Motivation in a Drama

What is Foreshadowing? - Types, Examples & Definitions