Anthrax is a disease caused by Bacillus anthracis, a bacterium that forms endospores. Learn about the three forms of anthrax, including cutaneous anthrax, gastrointestinal anthrax, and pulmonary anthrax. Updated: 09/23/2021
Create an account

If you've ever been to a few fancy restaurants, then you've surely noticed that they have some things in common. They usually serve a three-course meal with pint-sized pieces of food that turns out to be very costly. Indeed, the costly nature of something so small is very similar to the bacterium we will discuss in this lesson, which also happens to affect you in three different ways. 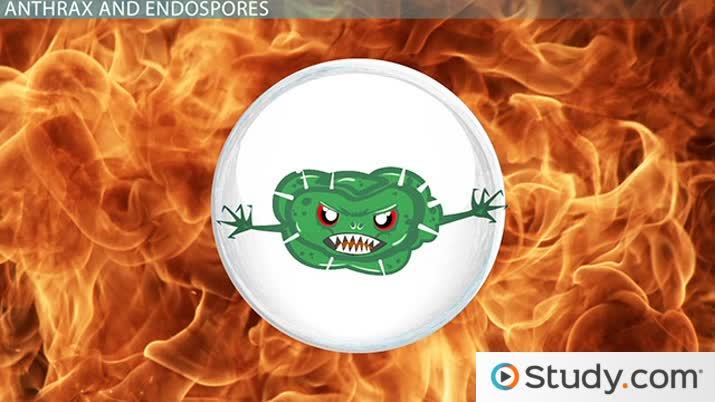 Coming up next: What Is Leprosy? - History, Signs & Treatment

Anthrax is a disease caused by a Gram-positive, rod-shaped bacterium called Bacillus anthracis. Just in case you didn't know, Gram-positive bacteria have a really thick cell wall in comparison to Gram-negative bacteria.

In any case, the insidious nature of this bacterium comes from its ability to form endospores, which are very hardy, long-lasting, dormant forms of bacteria. In times of great stress, such as nutrient deficiency, this bacterium can essentially transform into a super-protective structure that can shield itself from all sorts of deadly things ranging from temperature extremes to radiation. The endospore remains in this tough form for as long as necessary, only to re-emerge from a sort of hibernation when conditions are just right.

You can liken the endospore to a hazelnut found in the first course of our meal. The hazelnut, part of our fancy salad, is really hardy and tough to chew on compared to the softer tomatoes, cucumbers, and lettuce. Therefore, it's harder for our mouth to chew and destroy the hazelnut when compared to the vegetables in the salad.

Some of the vegetables in the salad, namely the cucumbers and tomatoes, have a thin layer, the skin, surrounding them. This skin is indicative of one major form of anthrax, called cutaneous anthrax, which is a form of anthrax that affects the skin.

If your skin is compromised due to something like a cut, and you manage to get a bunch of anthrax endospores lodged in there, you'll form a sore, which will turn into a blister, which will itself turn into a nasty black ulcer. Thankfully, however, the cutaneous form of anthrax is rarely fatal if treated with antibiotics. Typically, it takes two months of treatment to help clear the infection.

After munching on that thought, our tomato skins and hazelnuts, we are brought out little pieces of bread topped with very expensive foie gras for our second course. Foie gras is nothing more than really fatty goose or duck liver. Since the liver is part of our digestive system, it's only fitting we talk about the next form of anthrax.

This form is known as gastrointestinal anthrax, and, you guessed it, it is the form of anthrax that affects the digestive tract.

If you eat food such as meat that is infected with anthrax, then you'll almost certainly get a nice set of symptoms ranging from diarrhea to blood-filled vomit. The chances of death from this form of anthrax is anywhere between 25%-60%.

If you make it past the second course of our meal, the gastrointestinal form, you might be breathing a sigh of relief that you're still alive. But, you're being a bit premature. Our third and final course is going to kill you. In this course, you are served a delicious cake topped with a fluffy white powder. This white powder, however, isn't a sugar confectionery. It's actually lots and lots of anthrax spores. As soon as you inhale them, your chances of death are about 3 in 4, especially if not treated early enough with antibiotics.

As you can tell, this three-course meal consisting of cutaneous, gastrointestinal, and pulmonary forms of anthrax ended up being very costly indeed. Remember, anthrax is a disease caused by a Gram-positive, rod-shaped bacterium called Bacillus anthracis. The insidious nature of this bacterium comes from its ability to form endospores, which are very hardy, long-lasting, dormant forms of bacteria.