Ron has taught history and educational technologies at the high school and college level and has a doctorate in American History.

Definition and Views of Anti-Federalists

The Anti-Federalists was a group of diverse individuals that formed to oppose the ratification of the new federal Constitution in 1787. They were united by their fear of a powerful and potentially oppressive national government, a government dominated by wealthy aristocrats and the absence of a bill of rights in the new Constitution.

In addition to the new powers of the federal government, Anti-Federalists were also concerned that those elected to the government, including the president and members of Congress, would always come from the aristocratic levels of society. Since the government was so removed physically from the people - one capital within a large geographic nation - the elected members of the government would be out of touch with the concerns of average Americans and subject to the temptations of moneyed interests.

Finally, and most importantly for large states, like New York and Virginia, the new government did not contain a written bill of rights that would specifically list the rights of the people and the protections they had against an oppressive government. A bill of rights would also be essential to help the citizens become more knowledgeable of this new republic and the rights that they had to protect against tyranny. Anti-Federalists were concerned that undefined powers could be interpreted into many unintended purposes. Therefore, a bill of rights would not only protect the people but also educate them to become active citizens under this new government. 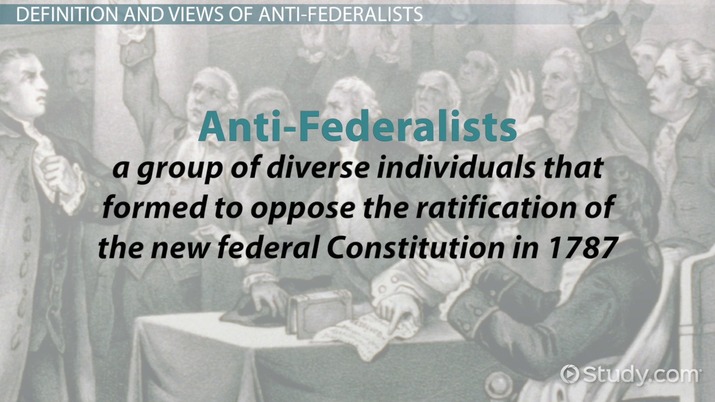 Coming up next: The Revolution of 1800: Definition & Overview

The Anti-Federalists were a very diverse group that had strong support in parts of New England, Rhode Island, Eastern New York, Western Pennsylvania, Southern Virginia, North Carolina and parts of South Carolina. This geographic diversity was mirrored by the social and economic composition of Anti-Federalists, which included wealthy Southern planters, middle class artisans and backcountry farmers. To lead this assorted group, men of strong will and political skills, like Patrick Henry and George Mason, rose to the occasion.

Patrick Henry was a leading figure in Virginia politics who had also served as Virginia's governor. Henry had declined an invitation to be Virginia's delegate at the Philadelphia constitutional convention fearing that, 'he smelled a rat.'

Henry recognized the problems that existed in the Articles of Confederation - the government in place before the Constitution - but wanted to work to make the Articles more effective rather than completely remove them for something new. Henry used his oratorical skills during Virginia's ratification convention to rally against the Constitution. Henry spoke most about Virginia's independence, won during the revolution against an oppressive monarchy, which to him seemed to be replicated under the new Constitution.

Another prominent Virginian, George Mason, also spoke out against the Constitution. Unlike Henry, Mason did believe that the Articles of Confederation needed to be replaced, and he attended the convention in Philadelphia. Mason was only one of three members of that convention who voted against the proposed Constitution and refused to sign the completed document.

Mason's largest complaint against the Constitution was that, 'there is no Declaration of Rights.' Mason drafted his own bill of rights during the convention, but those additions were not added to the original document. However, to appease Anti-Federalists, James Madison drafted a series of amendments, many of which were similar to Mason's original propositions. Madison's Bill of Rights was later added to the Constitution within the first ten amendments.

Despite Henry and Mason's efforts to defeat the Constitution, the Virginia convention voted 89 to 79 to approve the new government. Virginia's size, population and wealth provided great weight to the Federalist cause. While the Anti-Federalists dissolved with the adoption of the Constitution, their belief in limited government and the fear of tyranny would live on through the development of defined political parties during the 1790s. The Jeffersonian Republicans of the 1800s, the Democrats of the 1820s, the Whigs of the 1830s and the Republicans of the 1850s would echo the cause of liberty originally voiced by the Anti-Federalists.

Many Anti-Federalists, like Patrick Henry and George Mason from the mighty state of Virginia, worried that the new government would use its powers to gradually minimize the states until they had few responsibilities. The new Constitution provided for a president, a standing army and had the power to tax. For Anti-Federalists, this new government seemed to possess the same tyrannical powers as the British monarchy. Despite Henry and Mason's efforts to defeat the Constitution, the Virginia convention voted 89 to 79 to approve the new government. James Madison's Bill of Rights was later added to the Constitution within the first ten amendments.

When the new federal United States Constitution was proposed in 1787, a diverse group known as the Anti-Federalists opposed its ratification. They were concerned that an oppressive national government dominated by wealthy aristocrats would leave little rights to the rest of the citizens. Anti-Federalist leaders like Patrick Henry and George Mason helped promote the cause, but ultimately, the new Constitution was approved.

Study and re-examine this lesson about Anti-Federalists so that you can subsequently:

Federalists Views & Arguments | What are Federalists?