View bio
Learn about Sophocles' 'Antigone' and how it explored the topics of civil disobedience, fidelity, and citizenship. When you are finished, take the quiz and see what you learned. Updated: 07/30/2020
Create an account

In the 1960s, Rosa Parks refused to give her seat up to a white person and started one of the biggest legal fights of the era. Granted, while that was a premeditated act of civil disobedience, in Antigone, a tragedy written by Sophocles around 441 BCE, the heroine has a similar choice. She chooses to disobey the law and bury her brother not because she wants to make any big political statement but because he has every right to it. 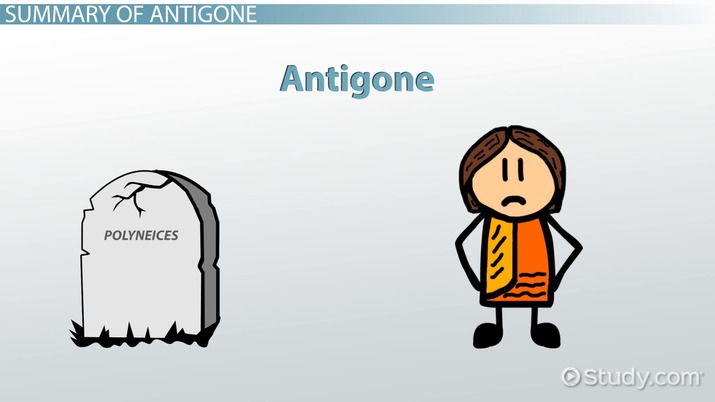 Coming up next: Aristophanes: Biography & Plays

Antigone begins with The two sons of Oedipus, Eteocles and Polyneices, who are fighting for the kingship of Thebes. Both men die in the battle. Their successor, Creon, decides that King Eteocles will be buried, but Polyneices, because he was leading a foreign army, will be left on the field of battle. Antigone, his sister, buries him anyway.

Antigone is caught burying Polyneices and is condemned to death. Her fiance and Creon's son, Haemon, learns about this and tries to convince Creon to change his mind. It's only then that the seer Tiresias appears. After a long discussion, he finally persuades Creon that the gods want Polyneices buried. By then it's too late -- Antigone has hung herself, Haemon kills himself when he finds her, and Creon's wife kills herself when she learns about her son.

One of the major themes in the story is civil disobedience - Creon has said that no one can bury Polyneices, and Antigone buries him anyway. She feels it is a bad law because Polyneices was her brother and he deserved his final rights.

Greek custom dictated that a city was responsible for burying its own citizens. But Creon believes Polyneices forfeited that right when he led a foreign army against its rightful king. Antigone doesn't care about that; she believes it doesn't matter what her brother did, he still died a citizen of Thebes.

Antigone is incapable of bending where her morals are involved. She believes that her brother should be buried, so she does it at the cost of her own life. During her interview with Creon she doesn't apologize for her actions, but argues against his law. When her sentence is decreed, she hangs herself rather than allowing an unjust king's unjust law to decide where and how she will die.

Creon is as stubborn with the law as Antigone is with morality. He believes that Polyneices was wrong and that he shouldn't be buried because of his actions. He also thinks that anyone who tries to bury him is guilty of the same crime. His son and the famous seer Tiresias can't convince him otherwise. When he finally understands that the gods think he is wrong he does relent, but it doesn't matter. Antigone, his son, and his wife all kill themselves, leaving him alone.

In the case of both heroes, their inability to change is their tragic flaw. The audience is supposed to see Antigone as the hero, though, because she embraced her fate while Creon tried to escape it.

Another important point from the play is how it related to the world in which it was produced. Sophocles wrote it during the Peloponnesian War, which was A 25-year war between Athens and Sparta. He never mentions any city-state by name, but it's pretty clear that they're portrayed in the play. The Athenians followed a democracy where any person could speak up and be heard. The Spartans had kings, like Thebes. The entire tragedy could have been avoided if the citizens could have spoken their minds. As it was, they were afraid to speak against the king. The result was a law that lost Creon his entire family.

Antigone is a tragedy written by Sophocles in the year 441 BCE and is a play about the aftermath of a civil war in which the two sons of Oedipus, Eteocles and Polyneices, kill each other, where the new king and their successor, Creon, tries to punish Polyneices for his disloyalty by not burying him properly. But their sister, Antigone herself (and Creon's soon-to-be daughter-in-law) refuses to accept the punishment and buries her brother against the law. Both Antigone and Creon are morally immovable in their convictions - Antigone believes in what she feels is right, and Creon believes in upholding the law at all costs. The results have political, moral, and even legal implications, all inspired by the chaos of the Peloponnesian War (a 25-year war between Athens and Sparta). But the end result, as with all Greek tragedies, is that Creon's entire family - his son and Antigone's husband-to-be Haemon and Haemon's mother - all wind up dead.

This lesson explained some of the major themes and events of Sophocles' Antigone. Now it's time to explore further and learn more about this famous and timeless story. Use one or both of the prompts below, depending on what aspects of this lesson interest you the most.

Aristotle, a Greek playwright who lived in the century after Sophocles, developed a theory of tragedy that divided tragic plays into four main components. These were hamartia, meaning a character's fatal mistake; peripeteia, a swift reversal of fortune; anagnorisis, a moment of realization where characters understand what is really going on; and catharsis, a moment of emotional release or purgation that concludes the play. Analyze Antigone through the lens of Aristotle's four elements of tragedy. Do the four elements exist in the play? Do any of them? Write a journal entry explaining your thoughts or create an altered outline for Antigone that does follow all four elements.

There have been dozens of adaptations of Antigone over the years, including film, stage, and musical compositions. Do some research on these adaptations and see what artists have changed about the story and what they have kept the same. Think about how the themes of Antigone are relevant to the world today or to another historical period. Using the medium of your choice, describe how you would create your own adaptation. Consider why your chosen setting and medium help contribute to the story. As well as an outline of your idea, write a sample scene or compose a short piece of music that would be part of your own adaptation.