Darren has 27 years experience as a certified HS science teacher and college professor. He holds a M.S. in Science Ed. and B.S.Ed. in chemistry

Antoine Lavoisier was a pivotal figure in late 18th-century chemistry. Explore his contributions to chemistry, including his take on the Law of Conservation of Mass, debunking phlogiston, and helping to advance atomic theory. Updated: 01/12/2022
Create an account

Perhaps the most profound contribution by Antoine Lavoisier, a key figure in the emerging field of chemistry in the late 18th century, was his insistence that chemistry be based on experiments and observations, not speculation. His pivotal book Elements of Chemistry (1789) contained a Table of simple substances, which listed 33 substances, many he proposed were elements.

Lavoisier proposed a definition of element, indivisible particles which we have found no means of separating. He acknowledged some of these substances might later be discovered to be compound substances, but proposed they should be considered as elements, and not supposed to be compounds until experimentation and observations furnished proof they were actually compounds. He demonstrated the formation of water in a sealed container by combining hydrogen and oxygen, showing water to be a compound instead of an indivisible element, as had been previously believed. 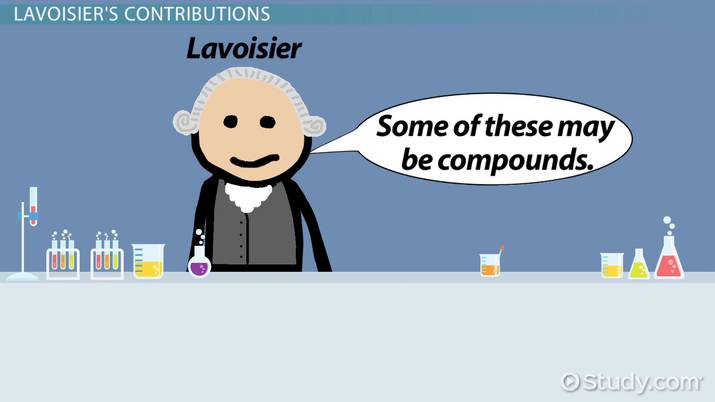 Try it now
Back
Coming up next: Antoine Lavoisier: Biography, Facts & Quotes

The field of chemistry was experiencing a paradigm shift during Lavoisier's time. Advances in available technologies were one reason for this shift. Instead of being interested primarily in the qualitative changes in the substances, chemists began to make extensive use of more precise balances allowing them to librate, or measure the mass on a balance, much better than was possible previously. Another technology that had been developed involved the use of sealed vacuum jars and pneumatic troughs to prevent the addition, or escape, of any materials from the system being studied. A combination of these balances and sealed containers allowed the chemists of the 1700s to be able to librate their sample before and after the experiments, comparing any changes in mass that may have occurred without contamination by outside sources.

Polished glass lenses that allowed the focus of large quantities of sunlight were yet another technological advancement that contributed greatly to the budding field of chemistry. These lenses allowed the chemists to generate intense heat by focusing sunlight onto the substances inside sealed containers, causing chemical changes without compromising the integrity of the container thus contaminating the sample.

Lavoisier conducted a series of experiments placing diamonds into sealed glass jars filled with oxygen. He placed this jar at the focal point of a series of convex lenses and incinerated the diamond, producing carbon dioxide gas. The diamond seemed to vanish. However, libration of the sealed container revealed the mass had not changed. The experiment was repeated in another jar that had most of the air removed from it before sealing. When subjecting these diamonds to the same heat, the diamond remained unchanged. These, as well as other experiments, provided verification of his proposed Law of Conservation of Mass.

The Conservation of Mass

Lavoisier is often credited with the discovery of the Law of Conservation of Mass, which states that matter is not created or destroyed in normal chemical reactions. This idea was not new, nor was it unique to Lavoisier. Joseph Black, Joseph Priestly, Henry Cavendish, Carl Scheele, and a host of other scientists pre-supposed the permanence of the matter which made up the creation. It was Lavoisier, however, that first proposed this as an inviolable principle in science. For this assertion, he is credited with the discovery of this fundamental principle.

The prevalent theory of what happened when something burned in the late 17th century through the 18th century was referred to as phlogiston theory. First proposed by Johann Becher as terra pinguis, it was renamed phlogiston by Georg Stahl from the Greek word for inflame. In fairness to Becher and Stahl, the phlogiston concept was vastly superior to the previous idea of earth, air, fire, and water being the four primary elements. Explaining combustion in terms of phlogiston fit the observed qualitative changes caused by combustion in a very predictable way. Phlogiston was the dominant theory of understanding combustion for over 100 years.

Chemistry prior to the mid-1700s was often qualitative in nature, as the precision of balances in that period didn't permit libration of samples with enough precision to deal with chemistry in a quantitative manner. When the aforementioned Priestly, a proponent of phlogiston theory, discovered what we now know as oxygen gas in 1774, he called it dephlogisticated air. Common scientific thought, using phlogiston theory, labeled nitrogen and carbon dioxide as phlogisticated air believed to be saturated with phlogiston. Daniel Rutherford, the discoverer of nitrogen, made a distinction between nitrogen and carbon dioxide previously discovered by Joseph Black in 1752. Lavoisier pointed out that these substances were discrete elements that had nothing to do with phlogiston.

As chemistry made the switch from qualitative to quantitative, it became obvious to many that the phlogiston theory could no longer explain experimental observations. Some substances supposed to be losing phlogiston decreased in mass, which caused some to attribute a positive lightness, or negative mass, to the substance known as phlogiston. In other chemical reactions, it was necessary for phlogiston to have a positive mass for it to fit the observed data. The scientific community of the late 1700s became polarized into two camps, the Phlogistians and Antiphlogistians, with Lavoisier in the latter.

In many ways, the phlogiston theory was a necessary step to help the scientific community to reject the idea of the four elements that had preceded it, providing a smoother transition from this to our currently held understanding of combustion. There was a running debate in the scientific community for almost 100 years about the existence of phlogiston. In the end, Antoine Lavoisier and the Antiphlogistians were shown to be correct as more and more discoveries contradicted the phlogiston theory until it was ultimately abandoned.

Let's take a few moments to review all that we've learned. Antoine Lavoisier was a key figure in the field of chemistry in the late 18th century. He consolidated the research of many of his contemporaries into a coherent theory of elements, which he defined as indivisible particles which we have found no means of separating. He demonstrated that these elements maintained a constant mass throughout any reactions they may undergo through the process of libration, or measuring the mass on a balance, as well as using huge convex lenses, sealed containers, and precise balances, which he used in his diamond incineration experiments. Along with the work of other great chemists, such as Daniel Rutherford, the discoverer of nitrogen, Lavoisier proposed the Law of Conservation of Mass, which states that matter isn't created or destroyed in normal chemical reactions. He was blessed with being in the right place at the right time in history, allowing him to put the discoveries of others together to develop a new understanding of the fundamental elements of chemistry, eventually dealing a death blow to phlogiston, meaning inflame in Greek, which was the dominant theory of understanding combustion for over 100 years.

Chemistry's Impact on the Modern World

The Space Race's Impact on Math & Science Education in the U.S.

The Three Isotopes of Hydrogen

Chemistry's Impact on the Modern World

The Space Race's Impact on Math & Science Education in the U.S.

The Three Isotopes of Hydrogen