Copyright
Lesson Transcript
Instructor: Greg Chin
Examine how Mendel's First Law of Segregation is applied to a hamster experiment. Learn how to name generations in a genetic cross, how the Punnett square is used, and the monohybrid cross. Updated: 08/12/2021
Create an account

The Law of Segregation

Now we've already learned that the Law of Segregation states that alleles at a given locus segregate into separate gametes. Basically, all that means is that each parent can only contribute one allele of any given gene to a gamete. Now, how does the Law of Segregation apply to our flying hamster studies? Let's consider Adrian's hamster experiment more closely. 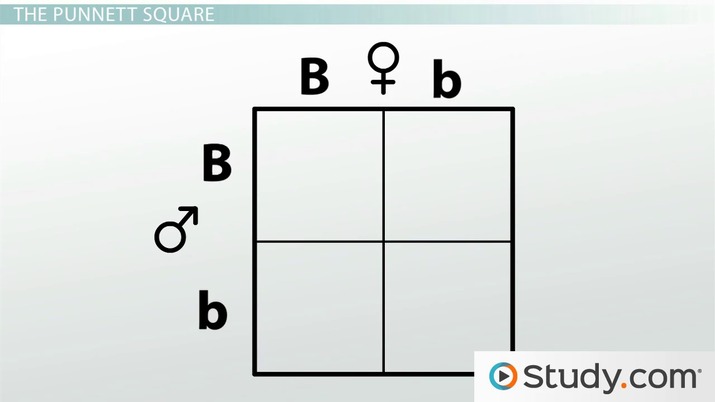 Coming up next: Mendel's Second Law: The Law of Independent Assortment

Naming the Generations in Genetic Crosses

Remember that he inferred that his two populations of brown hamsters and white hamsters were homozygous for the brown, or 'BB' allele, and white, or 'bb' allele, respectively. To determine which allele was dominant, he performed a cross.

Notice that the P generation cross was pretty simple and it's pretty easy to keep track of the genotypes when there's only one genotype that can be produced. Unfortunately, that's not always going to be the case and it really becomes necessary to have a system for keeping track of all the genotypes that are possible.

For instance, Adrian decides to cross two of the F1 hamsters. What is he going to get in the F2 generation?

Geneticists use an aid known as a Punnett square to help them determine what genotypes and phenotypes to expect. A Punnett square is basically just a chart that can be used to predict genotypic and phenotypic ratios of offspring in a genetic cross.

Adrian's cross between two heterozygotes is often referred to as a monohybrid cross. A hybrid is just basically something derived from a mixed origin. For instance, a hybrid car can operate based on either gasoline or electric-based power.

In this case, what we're talking about is a cross between hamsters that are heterozygous at a single gene (the coat color gene). Let's see how a Punnett square will help us determine the outcome of the cross.

So why don't you get a piece of paper and let's do this together? Go ahead and pause the video if you need to. Are you all ready?

Let's draw a square that encompasses those alleles. Let's divide the square into four equal sections so that each of the letters is on one side of the box.

I'm going to get 'BB' here, a 'Bb' here, another 'Bb' and finally I'm going to get a 'bb'. So all we've done here is we've used the Punnett square to help us represent the gametes segregating from the mother and the father into the new offspring.

It happens that these two hamsters got a 'B' from dad in this case and a little 'b' from mom in this case, but this hamster also has the same genotype; however, it got it's 'B' from mom and it got a 'b' from dad.

One common misconception is that the Punnett square is telling you that you're going to get four progeny all the time from whatever the cross is, in this case, these two heterozygous parents. And that the four progeny are going to be these four genotypes that appear in the Punnett square. That's not exactly the case. As you know, the number of progeny produced in any mating vary from mating to mating in general.

What the Punnett square is telling us is not the number of progeny that we're going to get, but the ratio in which the genotypes are going to occur. What it's telling us is that for any given progeny that's produced by this cross, there's a 1/4 chance that it'll have a 'BB' genotype; there's also a 1/4 chance to have a 'bb' genotype; and finally, there's a 50% chance that any progeny produced from this mating is going be 'Bb' in genotype.

So the Punnett square is telling us that we're going to get a 1:2:1 ratio of genotypes, but what we're really interested in is phenotypes because that's what we can actually observe. Let's look and see what phenotypes this cross is going to produce.

Note the fact that the white phenotype has mysteriously reappeared after having mated two brown hamsters together. This is another reinforcement of this idea of dominant versus recessive. Basically, a recessive phenotype can be masked in the F1 heterozygotes, but can then be uncovered in the F2 generation.

Based on his experimental results, Adrian can confidently conclude that hamster coat color is a single gene trait in which brown is dominant over white.

What is a Gene Pool? - Definition & Example