Applied anthropology involves the use of the discipline to address societal problems and to facilitate change, whereas academic anthropology is primarily about the teaching of the subject of anthropology. Learn more about each field's application, challenges, and benefits. Updated: 10/21/2021
Create an account

Arleen and Jackson both majored in anthropology at the same university. While at school, they became good friends. They have a strong passion for learning about human beings and culture. Both knew they'd picked the right discipline to study when they learned how it offered opportunities to impact the world in a positive way.

This lesson highlights the relationship between applied and academic anthropology. We'll also look at where they overlap with one another and how they are distinct. 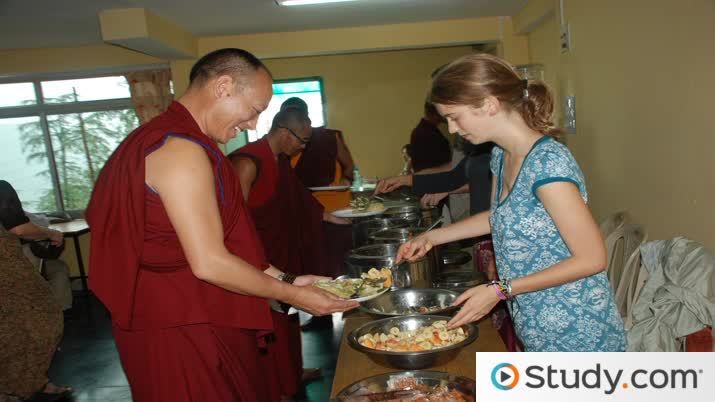 Coming up next: Understanding the Modernization of Culture: History and Factors

Applied anthropology refers to the use of the discipline to address societal problems and to facilitate change. The bulk of Arleen's time is used to directly tackle challenges that the nonprofit faces in creating effective programming. Her job is considered an applied anthropology position because she applies her knowledge to a role that is actively addressing an issue in society. This form of anthropology is also referred to as practicing anthropology because it puts knowledge into real-world practice.

Academic anthropology, on the other hand, refers to teaching the subject of anthropology and adding to the overall knowledge base of the field. Jackson's job as a professor is an example of an academic anthropology position. It is focused more on training others about the field, as well as researching and writing. His work still contributes to the discipline in a significant way, but the transfer of knowledge happens more in the context of an academic setting.

A person who works in academics may participate in applied anthropology work as well. For instance, Jackson periodically leads a semester aimed at addressing the issues faced by migrant workers in their community. A person who works in applied anthropology can also contribute to an academic environment. They can bring their experiences to the attention of the academic world through speaking or writing about it.

Since Arleen and Jackson stayed friends since school, one day they started texting one another about their experiences on the job. They share the challenges and the benefits of their roles.

Jackson wants to move to live closer to his aging parents. But unfortunately, leaving his current university might mean he will have to leave academic anthropology altogether since there are few jobs available for full-time professors in the field. Jackson sends Arleen a text: 'so few jobs in academic anthro these days. How's applied anthro?'

Arleen responds that she's happy to tell him about her experiences in applied anthropology. She writes that he'll face more ethical challenges in fieldwork than a student can learn about while in school. She also acknowledges that sometimes the actual impact is mixed, meaning that not all interventions and programs will immediately have the desired result of a positive improvement in society.

For instance, Arleen talks about how one of the programs implemented by their organization actually offended a small portion of the community. The group felt it violated their moral beliefs. Arleen found herself torn between defending her organization's stance and acknowledging the concerns of those offended.

Before Jackson can feel disheartened, Arleen adds some benefits to working in applied anthropology. Some organizations need the skills of an anthropologist who can put their academic knowledge of human beings and culture to practical use. She goes on to specifically list the types of groups: tribal associations, ethnic associations, governments, and nongovernmental organizations, like the nonprofit where she works. Not all positions will require an education in anthropology specifically but many of the skills learned will overlap with their needs.

Areas where anthropologists can provide guidance are public policy, program development, program evaluation, and interventions. For instance, at Arleen's nonprofit, they've recently sought her advice about how to adequately address the needs of the growing number of Filipino immigrants in their community.

Jackson can see how he might apply his skills to a job outside of academics. Anthropology lends itself well to practical use. Jackson writes that he's already regularly collaborating with other disciplines on a regular basis as part of his approach. He is used to looking at the whole picture from many different angles. Perhaps most importantly, his background in anthropology has led to him respecting human diversity and culture on a deep level.

Arleen sends him a smile and then adds a quote from pioneering anthropologist Ruth Benedict: 'The purpose of anthropology is to make the world safe for human differences.' This sums up the essence of both academic and applied anthropology. Both aim to contribute to an understanding of society that helps us live better together in our communities and in the world.

Applied anthropology involves the use of the discipline to address societal problems and to facilitate change. This is also known as practicing anthropology. By contrast, academic anthropology is primarily about the teaching of the subject of anthropology and adding to the overall knowledge base of the field.

Collaborating with other disciplines is common in both academic and applied anthropology, as is looking at the whole picture from many different angles. At its core, the modern practice of the discipline is about respecting human diversity and culture.

Once you're finished with this lesson, you should be able to:

The Mesolithic Age in India

The Paleolithic Age in India

Chiefdom Overview, Privileges & Functions | What is a Chiefdom?