We're talking about the production possibilities model in this lesson. The classic version of the production possibilities model is the comparison between two goods that a nation can produce - either guns or butter - and it must choose between these two goods. Famous people in history have used this analogy, including William Jennings Bryan, Margaret Thatcher and even leaders in Nazi Germany. In fact, the song 'Guns Before Butter' was written in 1979 by Gang of Four about this concept.

The production possibilities model is a visual model of scarcity and efficiency. It simplifies the concept of how an economy can produce things using only two goods as an example. It's going to show us all the production possibilities we have between these two goods. It takes the concept of opportunity cost, which we already explored, and helps us make the best economic decision we can make, which is to say, the most efficient decision. 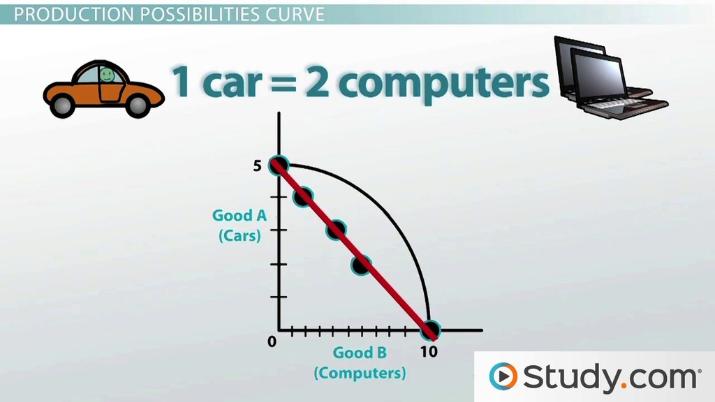 Coming up next: Shifts in the Production Possibilities Curve

There are three important assumptions involved in using the production possibilities model:

We're trying to use our resources to the fullest, but we only have limited, or scarce, resources. We're also assuming, right now, that the technology we use to produce our goods isn't changing at all. So, what are we really saying? If you are producing the right combination of two goods, then you're using your resources efficiently. Why is this important? Because it reveals to us all the tradeoffs of changing our production possibilities.

We can pick any two points on a production possibilities curve and explain the tradeoffs, or opportunity cost, of producing different combinations of these two goods. For example, if our economy is producing cars and computers only, we can choose to produce many different combinations of cars and computers. Since our resources are scarce, we can't produce as much as we want, but we can produce, for example, zero cars or ten computers. We could choose instead to produce five cars and zero computers. Why are these two numbers different? Because in this example, these two activities have different production rates.

Okay, time out. I want to clarify something important. Although the production possibilities model shows a straight line in this example, in the real world, the production possibilities model is a curve. As you produce more and more of one good instead of another, the opportunity cost will increase because some of the resources in an economy are only capable of producing one type of good. Which means that switching from one good to another will increase costs, and the more you switch from one good to another, the more expensive it gets. We call this the law of increasing opportunity costs, but some people call it the law of diminishing returns, which is the same thing.

For example, if an economy is producing some combination of cars and computers, and it wants to produce more cars, it will have to give up the opportunity to produce some computers, right? What happens is that each time you choose to produce additional cars, you don't get the same benefit; you don't get the same return for making that decision. Expanding your equipment so you can make more cars instead of computers becomes more and more difficult and expensive as you continue to do it. The result is that you give up more and more computers each time you add additional cars, which means opportunity cost is increasing. As you move from one side of the curve toward the other, this dynamic of increasing opportunity cost, or diminishing returns, continues to happen. It continues to happen until you reach a point somewhere in the middle where there is no benefit to producing more of one good and less of another. This is why the production possibilities curve is bowed outwards. It's bowed outwards, or shaped like a curve, because of the law of increasing opportunity costs.

The other fact we know is that any point inside the production possibilities curve is possible, but it's not efficient. The curve itself is an efficiency curve, which means it's showing us all the ways we can simultaneously produce two goods efficiently. That means any point that's inside the curve is not using all of our resources. So, if we choose to produce one car and two computers, we're producing less than our capacity. We have the resources to produce more stuff, but we choose not to.

So, why is the production possibilities curve bowed outwards? To answer this, let's talk about what's happening when we make a move from one point on the curve to another. The curve represents the fact that there is an opportunity cost for every production possibility. If we want to switch from producing zero cars to one car, we know that we could only produce eight computers instead of ten. The opportunity cost of this switch is the value of what we gave up to get it, which in this case means we would have to give up the opportunity to produce two computers, or at least this is how we've been simplifying it.

But in reality, it can cost a lot more to reallocate resources than simply handing over the metal that was meant for computers to the car manufacturer, particularly when we shift our resources toward making only cars or only computers. If we push to make much more of one product than the other, then production is less efficient, and we have a higher opportunity cost.

To summarize what we've talked about with the production possibilities model:

Now that you know what the curve is, you'll be able to recognize situations and scenarios that can change it, and this will help you understand how a nation attempts to increase its productivity.

Upon completing this lesson, you'll be able to:

Comparative vs. Absolute Advantage in Microeconomics

Scientific vs. Nonscientific Approaches to Knowledge

The History of Human Population Growth and Carrying Capacity