In this lesson, we will learn about the amazing historical coincidence that occurred when the Confederacy surrendered to the Union at Appomattox Court House, Virginia, in April 1865. Updated: 06/13/2020
Create an account

Do you know what a ''coincidence'' is? It's when two seemingly unrelated events happen but are connected by pure chance. It would be like you and your best friend wearing the exact same clothes to school, even though you hadn't planned it! Well, what happened at Appomattox Court House during the American Civil War was another example of coincidence.

During the first major battle of the Civil War, called the Battle of Bull Run, the Confederacy needed a house for their headquarters. The house they chose belonged to a man named Wilmer McLean. During the battle, a Union cannonball hit the house, causing some damage. Wilmer was afraid his property would be damaged further, so he moved his family 120 miles south to a town in Virginia called Appomattox Court House. 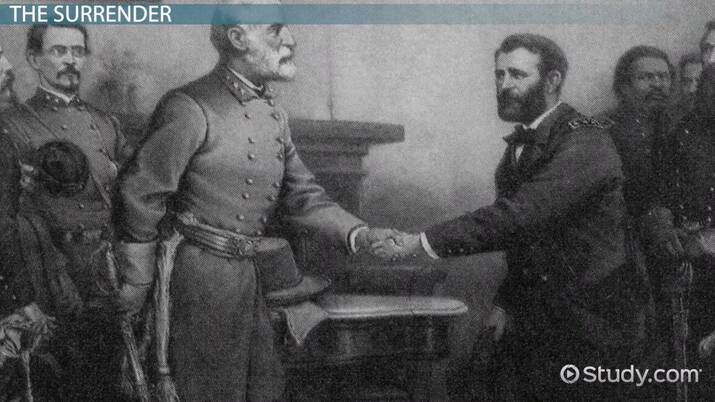 Coming up next: Why Was the Civil War Fought? - Lesson for Kids

The Siege of Petersburg

As the Civil War dragged on, the Union pushed to capture the Confederate capital of Richmond, Virginia, but failed repeatedly. Finally, the Union Army under Ulysses S. Grant, who was one of the Union's top generals, set up a siege of a small town just south of Richmond called Petersburg. The Confederate Army under Robert E. Lee, who was one of the Confederacy's top generals, dug in, trying desperately to protect Richmond from attack. The siege lasted for months.

During that time, Grant's army grew as the Union enlisted African Americans to fight. Meanwhile, Lee's army was shrinking due to illness and soldiers deserting. Finally, Lee couldn't defend the city any longer.

Lee hoped to join his army with other Confederate armies further to the south. On April 2, 1865, they quickly moved south, hoping to make it into North Carolina. However, the Union Army followed the Confederates with their cavalry. The Union kept up the pressure, capturing Confederate soldiers and their supplies. As Lee approached a small town in southern Virginia, he received a message from Grant suggesting that Lee surrender. Lee refused.

When the Confederates reached Appomattox Court House, Union cavalry were there blocking their path. Lee hoped to mount a large breakout assault on the Union before the northern infantry could arrive. However, what Lee didn't know was that a large group of Union infantry had marched throughout the night to cut the Confederates off.

On April 9, 1865, Lee ordered his men to attack, and they pushed the Union cavalry back. However, the Confederates then saw a huge sea of blue Union infantry uniforms behind them. Lee realized he was now trapped and had to surrender.

Lee sent a junior officer named Charles Marshall to find a place in Appomattox Court House for the two generals to meet to discuss the surrender of the Confederate army. Marshall saw a respectable brick house and believed it to be a good location. He knocked on the door, and guess who opened it? Wilmer McLean!

Marshall asked if the home could be used for the meeting. McLean reluctantly agreed. Grant gave the Confederates generous surrender terms, he and Lee shook hands, and departed. McLean later said, ''The war began in my front yard and ended in my front parlor.''

All right, let's review what we've learned. The events surrounding the surrender of the Confederates at Appomattox Court House, a town in Virginia, in April 1865 are a great example of an amazing coincidence. When Confederate general, Robert E. Lee, realized his cause was lost, he contacted Union general, Ulysses S. Grant, and the two men met in the house of a man who had seen the beginning of the war.

How did The Civil War End? | Civil War Timeline & Surrender

What are the Black Codes? - Lesson for Kids