Explore the adaptations that enable aquatic animals to survive in their ecosystems. Discover the adaptations different animals develop to cope with the salinity of the water and a range of water temperatures, perform respiration, and enable locomotion. Updated: 01/04/2022
Create an account

Think about the most extreme environments on Earth. You might be thinking of hot environments like the Sahara Desert, or cold environments like Antarctica. However, water can also be pretty extreme. The open ocean gets deep, dark, and cold as you descend, and rivers rush, tumbling over boulders and cliffs. When you think about, it might feel surprising that anything could live there. Animals, however, have evolved special traits that help them survive in an environment, called adaptations.

Today, we're going to look at some specific adaptations for aquatic animals that allow them to survive in both freshwater, like rivers and lakes, and saltwater, like the ocean. 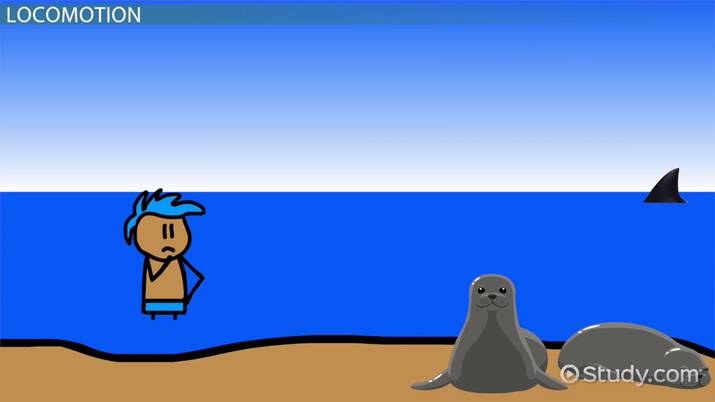 Try it now
Back
Coming up next: Plant Adaptations: Types & Examples

All living things need to be in balance, which is a fancy word known as homeostasis. Organisms need to have the right amount of water, salt, and exactly the right temperature to survive. Adaptations help maintain this balance. A major problem in any aquatic environment is salinity, or the salt concentration of a solution. If the environment has too much salt, the animal will lose water and get dehydrated. If there's too little salt, the animal will take up lots of water, and their cells can explode.

Animals in freshwater have an environment with too little salt. They have developed adaptations to get rid of extra water and hold onto salt using an organ called the kidney. The kidney is responsible for water balance in the body, or osmoregulation. In freshwater fish, their kidneys are specially designed to produce lots of dilute urine. Special structures in the kidney absorb lots of salt to maintain homeostasis. In addition, their gills have proteins that actively take salt from the water and bring it into the body.

What happens when you're too cold? You shiver to generate heat and keep warm. Your body takes action to keep you in homeostasis without you even thinking about it. Aquatic animals have a pretty big problem when it comes to keeping warm. Water transfers heat about 25 times faster than air does, which means an animal is going to lose heat a lot faster in an aquatic environment than a terrestrial one.

Sea otters have evolved thick fur to keep them warm in cold waters. The fur isn't just thick, though. Their fur is designed to interlock and create pockets of air between their skin and the water. Sea otters also secrete an oily layer on their skin to further prevent water from coming in contact with them. So, sea otters actually try to avoid getting their skin wet at all, even though they are aquatic animals.

On land, air is plentiful, and we simply breathe it in from the atmosphere. However, if you were submerged in water, you would quickly drown as your lungs became flooded with water. Fish and sharks have ways to get around this problem. These animals have gills, which are respiratory organs that filter air from water. Fish gills are designed for filtering oxygen, not simply filling the lungs like ours do. Fish forcibly push water over their feathery gills to extract oxygen and transfer it into their blood, allowing them to breathe underwater.

Imagine swimming laps in the pool. Now picture going for a jog. What do you need to swim versus what you need to jog? You are probably finding that you need completely different equipment for each task. Animals are no different. Aquatic animals have evolved very specific adaptations for swimming.

Picture swimming in the ocean on vacation. Although it's simply beautiful, you note the plethora of seals on the beach, a favorite food of sharks. It's also probably enough to make you think twice about taking surfing lessons that day. Sharks have evolved a stream-lined shape, being tapered at both ends. This adaptation allows them to swim with the least resistance, and quickly catch up with prey.

You might be surprised to learn that whales, although they're aquatic animals, are more closely related to wolves than they are fish. Whales evolved from land animals, and over time their limbs converted to flippers. Flippers allow whales to easily navigate the ocean much better than terrestrial legs could.

The ocean is a vast, deep place. However, if you've ever been to the ocean, you know our bodies float in salt water. So, you're probably wondering, how do fish and other aquatic animals stay at the correct depth? These organisms have a special adaptation called a swim bladder. A swim bladder acts as a ballast for the fish. It's usually filled with oxygen. When the fish fills the swim bladder, it effectively makes it less dense. This causes the fish to rise in the ocean column. If the fish makes the swim bladder smaller, it becomes more dense and sinks. Fish use this to control their depth in the ocean.

Aquatic organisms use adaptations, or special traits that help them survive in an environment, to stay at homeostasis, which is a fancy word for being at balance. Aquatic organisms must employ osmoregulation strategies, or water balance in the body. This is to keep their salinity, or salt levels, balanced. Fish in freshwater have adaptations that allow them to store salt and eliminate water, whereas fish in saltwater have the opposite adaptations. Aquatic animals also have adaptations to regulate temperature, since water transfers heat faster than air. Sea otters use a layer of air pockets combined with oily fur to stay warm. Oxygen is transferred from water through organs called gills in fish, sharks, and rays. Lastly, aquatic animals have lots of adaptations for moving in the water, like a streamlined design, flippers, and a swim bladder, which acts like a ballast for the fish.

Adaptation of Plants in an Aquatic Habitat

Aquatic Birds Types & Examples | What Is a Freshwater Bird?