Arachnophobia is an intense and abnormal fear of spiders and other arachnids. Explore the definition, symptoms, causes, and treatments of arachnophobia. Updated: 08/31/2021
Create an account

Imagine that you are at home watching television, and you see a spider walking across the floor. How would you respond? One normal response would be to scoop the spider up, and drop it outside your front door. Another normal response would be to squish the spider, and flush it down the toilet or put it in the trash can. However, if you find yourself having a panic attack and running away from the spider, you just might have arachnophobia. 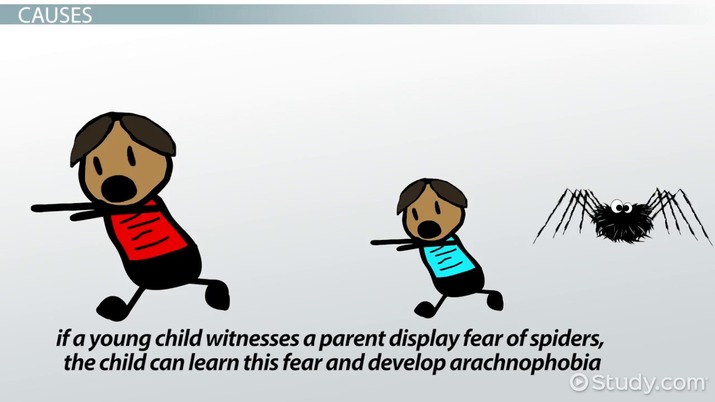 Try it now
Back
Coming up next: Triskaidekaphobia: Definition & Overview

The symptoms of arachnophobia are triggered by seeing a spider or something that indicates spiders are nearby, such as webs or egg sacs. For some, looking at pictures of spiders or hearing someone talk about spiders is enough to trigger symptoms. These symptoms can include:

There is no one definite cause for arachnophobia, though there are a few theories as to what causes this fear. The main three are evolution, cultural background and personal experience.

Some scientists believe that there is an evolutionary reason for the fear of spiders: that venomous spiders were very dangerous to our ancestors, so evolution has taught humans to fear them. Since some spiders are venomous, it is advantageous to our survival in the wild that we fear spiders. Those who fear spiders go to great lengths to keep spiders away; therefore, they have less of a chance of being bitten by a poisonous spider. This gives people who fear spiders a greater chance of survival than those who do not fear spiders.

Arachnophobia may be due to our cultural background. Spiders are eaten by humans as food in certain countries, such as Cambodia, Venezuela and Papua, New Guinea. As a result, arachnophobia rarely occurs in these countries. In the United States and United Kingdom, spiders are often seen in horror films, are made villains in children's stories and are believed to be unfriendly creatures by the general population. As a result, arachnophobia is very common in these countries. Additionally, if a young child witnesses a parent display fear of spiders, the child can learn this fear and develop arachnophobia.

Have you ever felt frightened by something as a child? If so, you probably don't remember the circumstances surrounding the event, but you remember how it made you feel. This same type of traumatic experience holds true for some arachnophobes. It is thought that some arachnophobes have had an incident with a spider occur when they were younger that frightened them. As a result, they became afraid of spiders and avoided them. Over time, this avoidance developed into arachnophobia. Many people are unable to recall what led up to their arachnophobia, only that there was an incident involving spiders and it caused them to panic.

Can arachnophobia be treated? As with most phobias, the answer is yes. Treatment usually involves cognitive-behavioral therapy, in which a counselor works with an arachnophobe to examine their thoughts and behavior patterns related to their fear of spiders. Arachnophobes are also taught relaxation techniques to decrease their anxiety responses to spiders. Anti-anxiety or sleep medication may also be prescribed to people suffering from arachnophobia.

Arachnophobia is an intense fear of spiders. Symptoms of arachnophobia include intense anxiety, avoidance of places known to have spiders, sweating and increased heart rate. While there is no single cause for arachnophobia, scientists believe that the main three causes are evolution, cultural background and personal experience. Systematic desensitization, virtual reality stimulation and cognitive-behavioral therapy are common treatments for arachnophobia. So, the next time you're sitting in a room with a group of friends and a spider crawls across the floor, watch how they respond. You might just find that one of your friends has arachnophobia!

By the time you have completed the lesson, you could be capable of achieving these objectives:

Sensation Overview & Types | What Is Sensation in Psychology?

Sensation Overview & Types | What Is Sensation in Psychology?