I completed my BA in Criminal Justice in 2015. Currently working on my MS in Homeland Security Management.

In this lesson you will learn about the many attributes needed to be a part of army leadership. You will also learn of the philosophy and principles associated with army leadership. Updated: 09/02/2022
Create an account

An army leader is someone who has taken the responsibility of the leadership role and uses it to inspire and influence those who follow him or her to accomplish the goals of the U.S. Army. The leader described next is a prime example of a great army leader.

U.S. Army General Stanley McChrystal is a four-star general deployed to Afghanistan. His goal was to create the best plan possible that would result in the best strategy for attack. In order for this to have occurred, he realized that he couldn't do it alone. He created a team that he could trust and that could trust him in return. His team had the same vision as he did for getting the job done. He relied on them, and they relied on him. He was able to develop a loyal team by keeping an open form of communication. No matter what an individual's rank was, he would listen to what they had to say. His team felt like their opinions could be heard and that they could contribute to the mission. 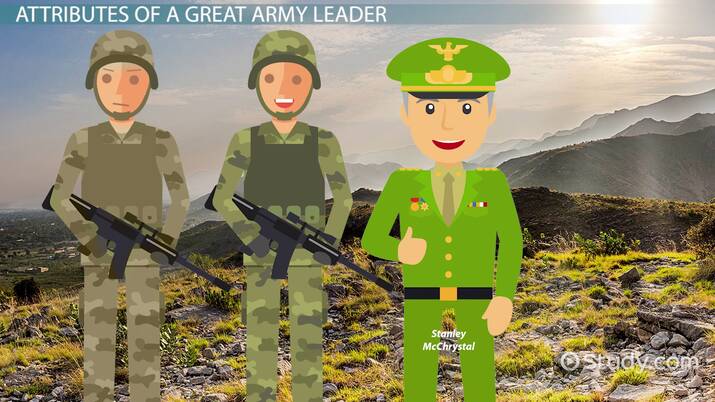 Try it now
Back
Coming up next: Strategic Leadership: Definition, Characteristics & Examples

Attributes of a Great Army Leader

Attributes contribute to how a person learns and behaves in their environment. They're what pinpoint if someone has the qualities needed to be a leader. The following three attributes are important points for an army leader.

Character measures what a person thinks is right, legally and morally. It's also important to note that integrity is the key point of a person's character. War isn't so black and white when it comes to determining the morality or legality of an army leader's actions. The Solider's Rules are a set of codes that set guidelines for acceptable and not acceptable conduct in war. Army leaders build credibility in their character when they strictly adhere to these guidelines. A leader who maintains integrity ensures that no one can question their personal character.

Self-concept is another point of character. This is how someone identifies themselves. A strong leader has to be able to identify themselves in a role of a leader and take on the responsibilities of a leader.

General McChrystal had known his responsibilities as a leader. He had led his team and ensured that trust was a key aspect of that relationship and that his team was part of the attack plans. His character had exemplified the qualities of a leader.

This attribute is the impression a leader leaves on their team that encourages them to follow the leader. This includes a leader's demeanor, actions and words, outward appearance, and inward intellect and character. In the army, a leader projects a presence of military and professional bearing, a holistic approach to problem solving, fitness, confidence, and resilience. A strong presence is necessary for an army leader, especially in areas of combat, where stress can have an impact on a soldier.

Taking a look at General McChrystal, he had a strong presence. He had encouraged his team to follow him. He had done this by creating a vision that everyone could follow. He had presented himself with the high military and professional bearing that his rank entailed. His holistic approach had allowed him to collaborate at all rank levels.

A leader's intellect is how well he or she can think. This includes thinking through problems, creating solutions, and making a decision. Thinking comes from a person's own individual perspective. No one will think or act in the same way as someone else. This explains why there are different leadership styles. A person's intellect will also determine their ability to understand and acknowledge their strengths and limitations. Being mentally coherent is an aspect of intellect that can help a leader be adaptive in any situation.

General McChrystal's intellect was an important factor in his understanding that he would not be able to carry out his plan of action alone. He knew he needed a strong, capable team and by obtaining one, he had chosen to take on a collaborative leadership role that utilized his strengths along with his team's.

This can be seen with how General McChrystal's team operated. His philosophy could have been interpreted as being centered around being the best leader to his team that he could be. He had led his team in a way that encouraged collaboration, he trained his team to be prepared for anything, he maintained his team by allowing everyone to have an equal part, and he cared for his team by listening to what they had to say, no matter their rank.

There are 11 principles that are incorporated in army leadership.

Because General McChrystal had a team that was able to collaborate and work on mission plans together, he was able to incorporate the eleven principles of army leadership. He had taken on the responsibility of a team because he knew he couldn't take on tasks alone. His team had become stronger and more confident under his direction. His respect for each of them as individuals and not rank, made the team realize he cared about them.

Let's take a moment or two to review what we've learned. In this lesson, we learned about what makes a leader through their attributes, which contribute to how a person learns and behaves in their environment. These attributes include character, which measures what a person thinks is right, legally and morally; presence, which is the impression a leader leaves on their team that encourages them to follow the leader; and intellect, which is how well he or she can think. And, as we saw, General McChrystal was a prime example of what a great army leader is. His attributes of character, presence, and intellect were prime examples of why his team in Afghanistan was so successful. He incorporated his leadership philosophy and followed the eleven principles, which provided this lesson with the best example of what an army leader should look like. This is what is expected out of all army leadership. When strong attributes are not present in a leader, and a clear philosophy is not present, it leads to an unsure leader with a team who does not have a clear direction or a vision to work for.