Arrhenius acid is a compound that raises the concentration of protons in an aqueous by adding hydrogen ions. Learn the significance of these acids through examples of their chemical reactivity. Updated: 11/02/2021
Create an account

What Is an Arrhenius Acid?

What can make a solution be classified as an acid? There are many definitions from different scientists as to what an acid is. In 1884, the Swedish scientist named Svante Arrhenius came up with the definition of an acid, which is known as the Arrhenius acid.

In the chemical equation below, it shows that when the acid, hydrochloric acid (HCl) is dissolved in water, the hydrogen (H) atom and the chlorine (Cl) atom dissociate from each other, and so, the concentration of H+ in an aqueous solution increases due to the release of H+ ions from HCl. The Arrhenius acid is HCl.

When an Arrhenius acid is in water, the acid releases hydrogen ions (H+), which are protons, in water, so it protonates water. When water is protonated, it results in the production of hydronium (H3O+) ions. In the chemical equation shown, it shows that the Arrhenius acid, HCl, protonates water (H2O). As a result, the hydrogen atom from HCl transfers to H2O, and this results in the hydronium ion (H3O+) and the chlorine ion (Cl-). Equation 1 below shows the chemical compounds involved in the chemical reaction, and equation 2 shows the structure of these chemical compounds so you can visualize how the acid protonates water. 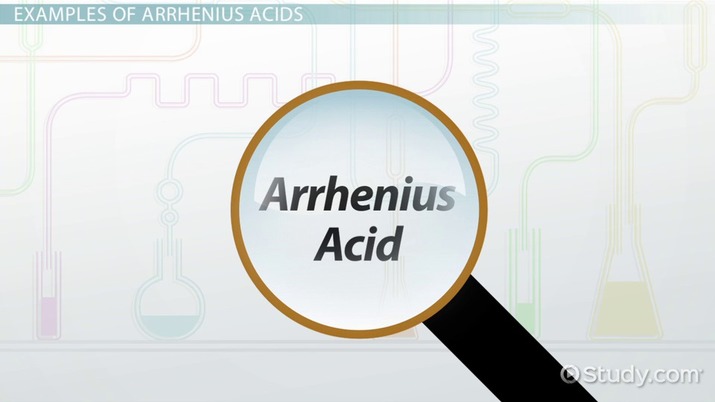 Coming up next: Buffer System in Chemistry: Definition & Overview

If we look at the periodic table, binary acids can be formed between hydrogen and elements from group 16 and 17. In the illustration below, the elements that are boxed in red are the ones that typically bond with hydrogen to form binary acids. For instance, hydrogen (H) bonds with fluorine (F) to form the binary acid hydrofluoric acid (HF).

The following table shows some examples of Arrhenius acids that are binary acids.

The following table shows some examples of Arrhenius acids that are oxoacids:

Let's take a look at a few examples of chemical reactions so that we can recognize what an Arrhenius acid is in a chemical equation.

This shows the reaction between acetic acid (HC2H3O2) and water (H2O).

In this reaction, water is protonated by acetic acid. Since acetic acid is an Arrhenius acid, this produces hydronium ion (H3O+), so the concentration of hydronium ion in an aqueous solution increases and an acetate ion (C2H3O2-) is produced.

This shows the reaction between hydrofluoric acid (HF) and water (H2O).

An Arrhenius acid is a compound that increases the concentration of hydrogen ions (H+) or hydronium ions (H3O+) in an aqueous solution. Hydronium ions are produced when the acid protonates water. An Arrhenius acid can be a binary acid, which are acids composed of a hydrogen atom combined with one other element. These elements are typically found in group 16 and 17 in the periodic table.

An Arrhenius acid can also be an oxoacid, which are acids with hydrogen, oxygen and at least one other atom. An oxoacid is formed typically when hydrogen combines with polyatomic anions, which are negatively charged ions consisting of more than one atom.

Lewis Acid & Base Examples | What is a Lewis Acid?

What is a Conjugate Acid? - Definition & Examples

What is Salt Hydrolysis? - Definition & Examples

Weak Acids List & Examples | What is a Weak Acid?

The Bronsted-Lowry and Lewis Definition of Acids and Bases