Arthropods are the most abundant animals on the planet. They fly, jump, swim, and crawl over just about every inch of the world. Learn about common types of arthropods and the characteristics they have in common.
Create an account

Let's say that you and a friend go to a restaurant. When you open the menu, you see that the daily special is fried arthropods. 'What's are arthropods?' you ask your friend? Crabs, your friend, replies. Yum! Crabmeat sounds delicious, so you order the deluxe platter. But when the waiter brings your meal, it's a big plate of fried insects! Yuck! Did your friend lie to you? No, your friend just identified the wrong type of arthropod.

Insects, crabs, shrimp, spiders, scorpions, grasshoppers, centipedes, and millipedes are just a few of the many examples of arthropods, which are invertebrates that belong to the phylum Arthropoda. Invertebrates are animals that don't have a backbone.

Arthropods might seem like creepy creatures to you, but the world is a better place because of them. Insects provide food for birds and other animals and pollinate flowers, so plants can produce fruits and vegetables. Believe it or not, many people around the world eat insects and look at them as a healthy and even yummy meal. Fried grasshoppers anyone? You might like to eat arthropods too, but I bet you'd rather have crab legs, lobster, or shrimp. Even the slithering millipedes that you'll learn about in this lesson serve a purpose. They break down wood and plants, which helps make the soil better for growing things. 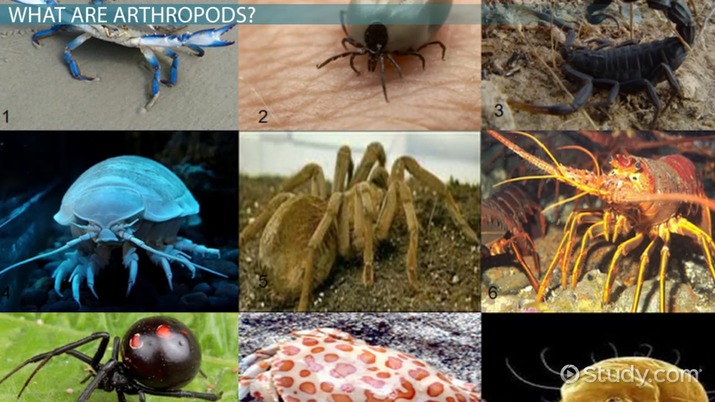 Arthropods come in many different shapes and sizes, but they do have some characteristics in common. For instance, all arthropods have segmented bodies. Look at this common housefly. Can you see its three body segments? There's a head, thorax, and abdomen.

This spider only has two body parts, we see the abdomen, but the head and thorax have merged to form a single cephalothorax.

The head section of most arthropods includes a mouth, antennae, and simple or compound eyes. Simple eyes use one lens to focus light, so that's the type of eye you have. Compound eyes are eyes that contain many small light-sensitive lenses. If you ever looked at the eye of a fly up close, you noticed the many tiny units that make up its compound eye.

Another characteristic that all arthropods have in common is jointed legs. In fact, their name comes from the Greek words arthros, which means jointed and pod, which means foot. These flexible feet can be used for walking or jumping, like the powerful legs on this grasshopper, but some species have modified legs that they use for feeding, feeling, or defense, like the scary looking forelegs on this scorpion.

Arthropods might not have a skeletal system like you and me, but they do have exoskeletons. The prefix exo means external, so an exoskeleton is an external skeleton. The exoskeleton is what you have to crack through when you're eating crab legs.

Arthropods make up over three-fourths of all living creatures on Earth. There are hundreds of thousands of species of arthropods that are broken into different types.

Arachnida is a class of arthropods that includes creepy creatures like spiders, daddy longlegs, ticks, mites, and scorpions. Arthropods in this group have four pairs of legs. One pair of legs may be modified to produce fangs or pincers, which they use to subdue prey. Their venomous bite or sting injects digestive enzymes into the prey that creates a small pool of liquid which can be drunk.

Insects are the most common form of life on the planet, and they have been around for millions of years. In fact, cockroaches have been on Earth since the days of the dinosaurs. Insects have three body segments and three pairs of legs that come off of their thorax. Many insects also have one or two pairs of wings making them the only invertebrates that fly.

Insects go through a metamorphosis as they develop, which means they change form as they mature. Metamorphosis is how a frumpy-looking caterpillar changes into a beautiful butterfly. Other common insects include moths, fireflies, beetles, mosquitoes, houseflies, bees, ants, and grasshoppers.

Centipedes and millipedes are arthropods that are under the same subphylum as insects. Both are highly segmented creatures with lots of legs. You can tell them apart by the number of legs on each body segment. Centipedes have one pair of legs per segment, and millipedes have two. Knowing the difference between these two creatures is a good thing because centipedes have a painful and dangerous bite. Millipedes, on the other hand, are herbivores, which means they eat vegetation, not meat.

Crustaceans are arthropods that are mostly found in the water. Members of this group include crayfish, shrimp, crabs, lobsters, and barnacles. Crustaceans have two body sections and five pairs of legs. Each of the front legs is usually modified to help with grasping food or eating.

Arthropods are invertebrates that belong to the phylum Arthropoda. All arthropods have segmented bodies, jointed legs, and an exoskeleton.

Arachnida is a class of arthropods that includes creepy creatures like spiders, daddy longlegs, ticks, mites, and scorpions. One of their four pairs of legs is often modified to include fangs or pincers.

Insects are the most common form of life on the planet. They have three body segments and three pairs of legs that come off of their thorax.

Crustaceans - which include crayfish, shrimp, crabs, lobsters, and barnacles - are arthropods that are mostly found in the water. Crustaceans have two body sections and five pairs of legs.

What is a Crustacean? - Definition, Characteristics & Types

Characteristics of Arthropods Lesson for Kids