The Incan Empire created fine works of art in precious metals, ceramics, and fabrics, which complemented the nation's complex oral traditions. Explore Incan art and how its language and oral culture were used to keep records, share information, and pass down history. Updated: 10/29/2021
Create an account

Art and Language in the Incan Empire

In the high Andes Mountains, in modern-day Peru, sat the largest native empire in the Western Hemisphere: the Incan Empire. The Inca had a very complex and sophisticated culture, complete with artistic and linguistic traditions. Unlike most major empires, however, the Inca did not have a system to write their language. Because of this, art and language became very closely connected as ways to communicate and record their daily lives. 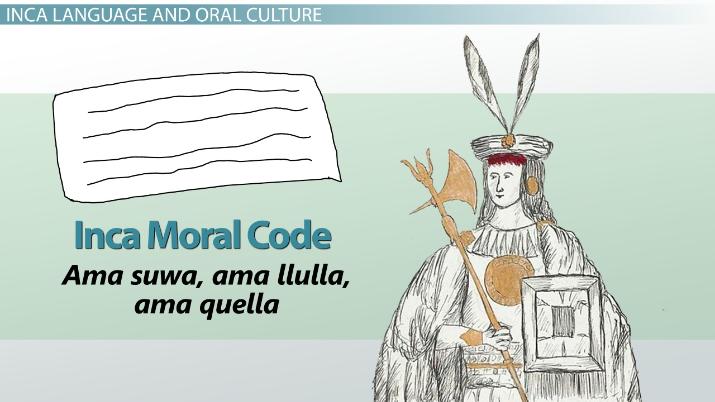 Coming up next: Artistic & Oral Traditions of the Aztec

The Inca were talented artists. A lot of their artwork was made in gold or silver, and according to historical sources, was of very high quality. Images of the sun were common, likely in reference to the sun god that the Inca heavily worshipped. Unfortunately, most of the Inca gold was melted down by the Spanish after the fall of the Incan Empire.

The Inca also made lots of ceramics, or items made of baked clay. These tended to be pots or vases and came in all sorts of shapes from geometric figures to alpacas and llamas. The Inca carved scenes of daily life or history into their ceramics, which was a useful way to record events since they did not have a written language. Ceramic vases were sometimes just for daily use, but others were special containers for offerings to the gods, such as coca leaves or maize kernels.

Another art form that also served for communication was cloth. The Inca had a wide variety of dyes they could use to color their cloths and created complex geometric patterns. These color arrangements could serve to identify important people; for example, only royals could wear certain patterns. Some archeologists also believe that the patterns on certain tunics or robes actually served as a symbolic language, where certain shapes represented a word or idea. This has not been proven, but it does indicate the complexity of both the Inca and their clothes.

The Inca language was called Quechua. The family of Quechuan languages, languages that evolved from the same source, was the most popular language of South America before the arrival of Europeans. To this day, there are still many people who speak Quechua, especially in the Andes Mountains, the ancient home of the Inca.

Language was very important to Inca culture, particularly because the Inca did not have a form of writing. Their history, religion, and education were passed down through oral communication. Considering how sophisticated their culture was, it is incredible they were able to achieve so much without ever writing down their language. This shows that they were very careful to continuously recite and maintain their oral traditions, like the Inca moral code. Ama suwa, ama llulla, ama quella. 'Do not steal, do not lie, do not be lazy.'

The mystery of how the Inca governed a massive empire without written records lies in the quipus. Quipus were knotted strings tied together on a rope to collect data or keep records. They may have been used to record census data, population size, taxes, business transactions, even dates, history, and literature. A quipu could have a handful of strings, or thousands. The strings on the quipus have knots tied into them that clearly indicate a numeric system, but unfortunately, the knowledge of how to read them has been lost. Nobody fully understands the quipus. All we know is that they were a complex system of record keeping that may have compensated for the lack of a written language.

The Inca were a highly-sophisticated culture that lived in the Andes Mountains of South America before the arrival of Europeans. They spoke a language called Quechua, but did not have a written form of this language. It is amazing that they accomplished so much without writing, but they probably had other ways to record information, history, and stories. Because of this, much of their art was also used for communication.

Ceramics had scenes of daily life, as did gold and silver. Inca cloth was dyed in geometric patterns that communicated identity and social status and was covered in symbols that represented ideas or words. The most mysterious pieces of Inca art or language were the quipus, knotted cords that recorded data and information. The knowledge of how to read these has been lost, and no one has yet encoded their mysteries. The Inca were a complex civilization and were able to build the largest empire in the Western Hemisphere, even without a written language.

Once you've completed the lesson, your goal should be to:

Artistic & Oral Traditions of the Aztec