The Mayans created fine works of art in stone, wood, and stucco, which complemented the nation's complex oral traditions. Explore Mayan art, language, and oral culture, and learn how their written language flourished and spread through the city-states of the ancient civilization in Central America. Updated: 10/29/2021
Create an account

The Art and Language of the Ancient Maya

In the jungles of Central America, there was an ancient civilization called the Maya. They had sophisticated culture, science, religion, math, astronomy, art, and even writing. The Maya were not a single empire, like the Aztecs or Inca, but were several independent governments based in an urban center, called city-states, that shared a similar language and culture. 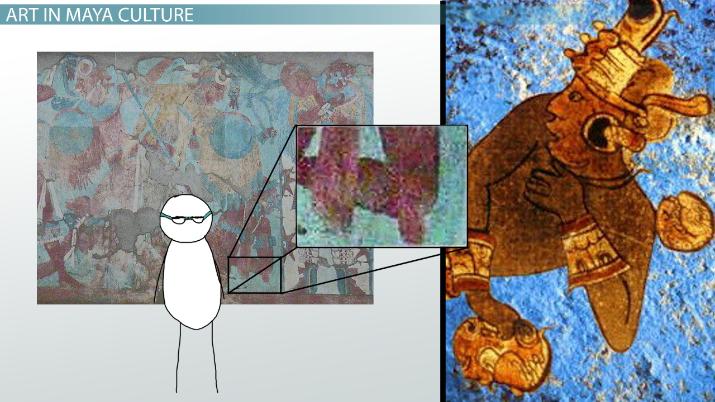 Coming up next: Artistic & Oral Traditions of the Inca

Art was prevalent in Maya societies. The temples, ball courts, royal palaces, observatories, and tombs were often covered in murals. These large paintings on walls depicted scenes from Maya religion, history, and daily life. To make the murals, the Maya had a wide variety of colors they either created or received through trade. The most notable of these was a rich, turquoise blue that became famous across Central America.

Other styles of Maya art included woodcarving, stone sculptures, ceramics, and modeled plaster called stucco. These pieces of art were found in homes, temples, palaces, and pretty much any other place the Maya could put them. Art was a major part of Maya culture because it was deeply connected to their language, history, religion, culture, and life.

The Maya were the only major civilization in the Americas to develop their own written language. A true written language must represent the entire spoken language in symbolic form, using letters or characters for sounds or ideas. The Mayan written language was hieroglyphic, meaning it used symbols rather than letters. Although the language changed over time, there were about 500 symbols used at any given time in written Mayan. This meant that if you wanted to write in Mayan, you would have to learn 500 different symbols, as opposed to the 26 letters in our alphabet.

The Mayan written language was developed roughly between 300 and 200 BCE. It was carved into temples, palaces, and tall stone markers called stelae, but also was written into books. Maya books were made of paper from processed tree bark. Rather than each page being made individually, the entire book was one long piece of paper that was folded into pages of equal width, called a folding book. They wrote mostly in black ink, outlined or highlighted in red. This may be the reason that another Central American civilization, the Aztecs, referred to the Maya as the people of black and red.

Scribes, who were people officially responsible for writing, were very influential in Maya society. Since written Mayan required knowledge of 500 different symbols, only a few people with lots of training were fully literate. This meant that being able to write was very prestigious. One way we can tell this is from Maya murals that depict kings holding the tools of a scribe, most frequently a bundle of pens or inkwells.

The Maya were a civilization in the ancient Americas who developed highly sophisticated culture, religion, art, and even writing. The Maya were not a single empire or kingdom, but rather a series of independent governments based around urban centers called city-states that shared language and culture. Maya city-states were full of art, from ceramics to carvings, that covered every aspect of Maya life, from religion to history to scenes of daily chores.

Most impressive, however, was the Maya writing system. A true writing system must represent the entire spoken language in symbolic form, using letters or characters for sounds or ideas. The Maya had the first, and only, writing system in the Americas. Their language was hieroglyphic, meaning it used images rather than letters, and contained over 500 symbols. The Maya wrote their history and religion down in folding books, books made from folding a long piece of tree-bark paper into several pages. Some of these books managed to survive the Spanish invasion of Central America, and still inspire people with their colorful mastery to this day.

After reviewing this lesson, you could understand the importance of language and art in Mayan culture.

Artistic & Oral Traditions of the Inca

Artistic & Oral Traditions of the Aztec

Samurai Overview, History & Code | What is a Samurai?