Lesson Transcript
Instructor: Sarah Phenix
In this lesson, you'll explore the many varied forms of asexual reproduction used by plants, bacteria, yeasts, and animals that result in offspring that are genetic clones of the parent organism.
Create an account

I'm sure everyone is familiar with 'the birds and the bees,' but lets take a moment to review what happens, on a cellular basis, during sexual reproduction so that we can understand how it's different from asexual reproduction. 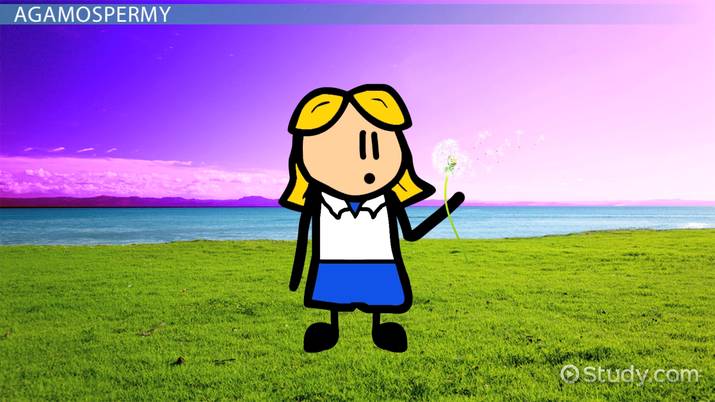 Sexual reproduction is what most people commonly think of as reproduction. We talk about 'the birds and the bees' with children and are really talking about creating new people using a process that requires the fusion of two gametes, or sex cells such as sperm and eggs. These gametes are created using a form of genetic reduction called meiosis, which causes cells to divide and results in creating haploid gametes, or sex cells that have half of the necessary genetic information to create a new person.

As you probably know, we have a total of 46 chromosomes in our bodies. These are called diploid cells because they have a full complement of chromosomes. However, eggs and sperm have 23 chromosomes, or haploid cells. These cells receive the other half, or the other 23 chromosomes, when they fuse with another haploid gamete. In other words, 23 + 23 = 46 chromosomes. If you look around at the people you see on the street, you can see that this type of reproduction is highly variable. One way you might see this variability in your own family is in eye color: you may have different color eyes than your brothers, sisters, or your parents, and that is due to the genetic shuffling that occurs during sexual reproduction.

On the other hand, asexual reproduction is a form of reproduction that does not require two gametes to fuse. Instead, it's the product of a different process of cell division called mitosis. Mitosis is essentially cellular replication (or cloning) and, unlike meiosis, does not lead to any genetic variability. Asexual reproduction results in offspring that are known as stable clones, meaning that their genetic makeup is stable and doesn't change between generations. So, cloning isn't just the stuff of science fiction! Plants and certain species of animals frequently use this form of reproduction to create offspring.

Plants can undergo asexual reproduction via root structures. Rhizomes are root structures that branch out into the soil and sprout new plants up through the earth. Each of these plants is an exact genetic replica of the parent. This is one asexual method that plants use. Another form of root-based asexual cloning are tubers. Tubers are a type of root vegetable that are actually modified root structures, which swell to store nutrients (like potatoes) and can sprout rhizomes of their own. These new sprouts, since they are asexually derived, will be clones of that parent plant. So, instead of boiling that potato for supper, you could let it sit and you would soon see roots begin to sprout from the potato. And, if you cut the potato up and then planted each piece, each would grow into a new potato plant genetically identical to one another.

Plants also have above ground methods of asexual reproduction. Some plants, like spider plants and strawberry plants, send out little shoots, called runners or stolens, above ground that will bud new stems. These new plants will root and eventually send out stolens of their own, forming a vast network of clones. Other plants, like banana plants and seedless grapes, can sprout adventitious roots from their stems or leaves that will drop off and root as an individual, isolated plant, disconnected from the parent root system. This phenomenon is known as a form of apomixis, or reproduction without mixing genetic information of unique individuals.

Agamospermy, like adventitious roots, is a form of apomixis. However, rather than budding stable clones, agamospermy plants produce seeds or spores that develop into a new organism without fertilization - yet another form of cloning!

Mosses and ferns are known as alternate apomictic plants that have both a sexual and asexual life cycle. In the asexual stage, a sporophyte (or a spore producing plant) creates spores, which are haploid cells like the egg and sperm that we discussed earlier. However, unlike the eggs and sperm we discussed, spores don't require fertilization; they are the asexual stage of reproduction. These spores will grow, without fertilization, into the next stage of plant, called gametophytes, which is gamete-producing plant. These gametophytes will mature and produce gametes that require sexual fertilization from another gametophyte to reproduce the next line of sporophytes. This new sporophyte starts the alternating asexual/sexual cycle anew.

Dandelions are another type of plant capable of agamospermy but, instead of creating haploid spores like ferns do, they produce seeds. These seeds are extremely unique as, unlike most seeds, they do not need fertilization to be produced and, unlike asexual spores, these seeds are formed with the entire complement of genes - they aren't haploid, they're diploid! So, the next time you pick up a dandelion and blow the fuzzy seeds off the head, you could be dispersing clones of that very plant you are holding.

Bacteria and other simple organisms, like amoebas and paramecia, use a form of asexual reproduction called binary fission. In binary fission, organisms replicate their internal structures and then literally split themselves into two organisms. Other organisms, such as yeasts, sea sponges, jelly fish, and Hydra, will bud, or sprout genetic clones from their bodies that eventually break off, forming new individuals.

Fragmentation, also known as regeneration or transverse fission, is yet another form of asexual reproduction that organisms like sea stars, sea sponges, and flatworms can engage in where they can literally be 'fragmented', or cut into many pieces, and each piece will regenerate the portions it's missing.

Some species of bees, wasps, and ants can reproduce without requiring fertilization, called parthenogenesis. In this case, unfertilized eggs develop into female offspring, which is the asexual reproduction of genetic clones of the mother, whereas fertilized eggs develop into male offspring. This phenomenon has also been witnessed in some reptiles and sharks. In each of these rare instances, females were isolated from males yet were able to produce female offspring that were found to carry the exact same genetic code as the mother: they were clones.

To review, asexual reproduction is any method of producing offspring that does not require the fusion of two gametes from different parents. In plants, asexual reproduction takes the form of stolens, rhizomes, and tubers as well as adventitious roots, sporophytes, and agamospermy. Bacteria, yeasts, and some animals are also capable of asexual reproduction via binary fission, budding, fragmentation , or parthenogenesis.

The Reproduction System of Platyhelminthes