Raghav has a graduate degree in Engineering and 20 years of professional experience.

This lesson explains the mathematical definition of aspect ratio and a method to calculate the aspect ratio of any given shape. An example calculation is used to compare objects of different aspect ratios. Updated: 08/31/2021
Create an account

Look around you at different objects. Almost all objects around you have dimensions such that one side of the object is typically different (it could be longer or shorter) than an adjacent side. For example, look at your TV screen or your computer screen. Most TV screens have one side larger (or longer) than the other side. An aspect ratio is a mathematical parameter that describes the relationship between the adjacent sides of mechanical objects.

Take a look at this figure appearing here.

As you likely know, this shape is called a rectangle, and occurs commonly in objects everywhere around us. Again, for example, look at your computer screen: it's a rectangle. A rectangle has two key defining dimensions, commonly called length (noted here as L, and width, noted here as W). 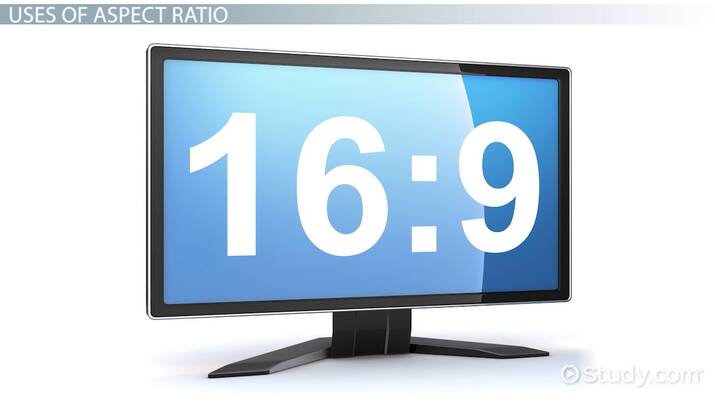 Coming up next: What is an Oscilloscope? - Definition & Types

The length of a widescreen TV is 72 inches and its width is 42 inches. What is the aspect ratio of the screen?

It's easy to see that the aspect ratio of a square is 1, since the length and width are equal.

Aspect ratio occurs frequently in many mathematical formulations of engineering problems such as aerodynamics, structural mechanics, digital imaging, and architecture.

It's also very common in films and television. For example, have you ever seen a movie that was originally made for theaters that rebroadcast on TV? Often, the film will start off by stating that it has been reformatted to fit on TV. This is partly because TV usually has an aspect ratio 16:9, whereas films in cinemas will have an aspect ratio of 1.85:1.

In many cases (though this isn't always true) two objects with the same aspect ratios have similar behavior. The use of aspect ratio, therefore, enables comparison of the behavior of objects of different shapes.

Let's review. This lesson described the significance and definition of an aspect ratio. An aspect ratio is defined as the ratio between the longer and shorter dimensions of an object. For a rectangle, it's simply the ratio of the longer side to the shorter side of the rectangle. Since aspect ratio is a ratio of two lengths, it has no units. Aspect ratios are commonly found in mathematical formulations in many engineering fields.

Subsystem Structures & Examples | What is a Subsystem in Business?

Deadlock Overview & Examples | What is Deadlock?

What is 'Public Static Void Main' in Java?

How to Use Study.com

How to Use Study.com for School Closure: Teacher Edition

How to Use Study.com for School Closure: Student Edition

How to Use Study.com for School Closure: Parent Edition