Aspirin is a non-steroidal anti-inflammatory drug used for things like pain relief and lowering the risk of a heart attack. Explore the structure, molecular weight, and the three functional groups of aspirin. Updated: 01/04/2022
Create an account

Can you guess how long aspirin has been around as a pain reliever? History shows that the use of aspirin dates back to 400 BC. That's more than 2,000 years ago. During this era, the ancient Greek doctor Hippocrates gave women willow leaf tea to help relieve the pain associated with childbirth. Several centuries later, in the 1800s, an active ingredient in this tea called salicin was discovered.

Your own medicine cabinet may contain a bottle of aspirin. Muscle aches and pains, a fever, or inflammation are just a few of the different reasons people take aspirin. A salicylate, aspirin is classified as a non-steroidal anti-inflammatory drug, or NSAID.

Outside of its use for minor aches and pains, aspirin has proven to be an important therapeutic weapon in fighting heart attacks. In fact, the United States Federal Drug Administration recommends that those with a history of heart problems take a low dose treatment of aspirin to reduce their overall risk of a heart attack. 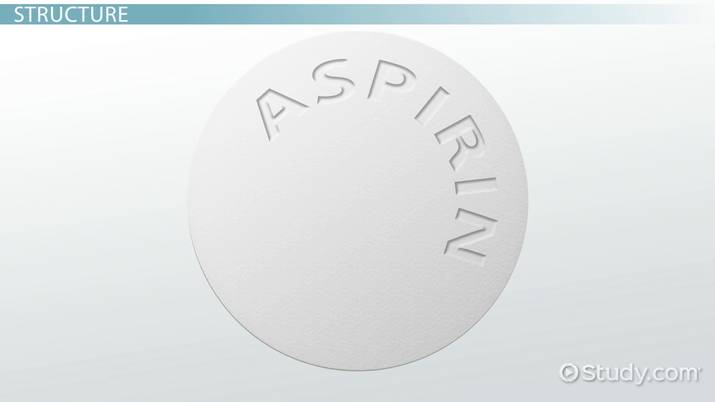 Coming up next: How to Master Multiple Choice Questions on the AP Chemistry Exam

The chemical name of aspirin is acetylsalicylic acid. By looking at its chemical structure, you'll see that it's composed of three different types of atoms: carbon, hydrogen, and oxygen. These atoms are either single or double bonded together to form the overall structure of aspirin. The molecular formula of aspirin is C9 H8 O4. Its molecular weight is 180.157 grams/mole.

Let's go back and look at the chemical name of aspirin, acetylsalicylic acid. This name, along with its formula, provides a great clue about its structure. Did you notice something unique about the chemical name of aspirin? The word, 'sali-' is in the name. Remember, before aspirin was officially discovered, Hippocrates used willow leaf tea, which contained the active ingredient salicin. In fact, salicin is a starting material used to make aspirin. That's right! You can use willow bark to make aspirin.

There are three functional groups found in aspirin:

Collectively, the functional groups works together to influence the properties of aspirin. So, you can thank these groups for making aspirin one weak acid that is soluble in basic solutions, a great property to have, as it contributes to aspirin's ability to dissolve easily in your intestines.

Aspirin is a common NSAID used to function as a pain reliever and fever reducer. Its history dates back to ancient Greece, where an active ingredient in aspirin, called salicin, was found in willow bark. It has the molecular formula C9 H8 O4 and a molecular weight of 180.157g/mol. There are three different functional groups in aspirin, which contribute to its properties, a weak acid soluble in basic solutions. These functional groups include carboxylic acid, ester, and an aromatic group.

What is a Computer Security Risk? - Definition & Types