Consider that you are writing a program for a payroll calculation. In order to calculate pay, you're going to need more variables to store pay rate, hours worked, overtime calculations, etc. When you create the variable for pay rate, the following declaration is perfectly okay:

Recall that the float data type holds decimal values. Pay rate is usually calculated to two decimal places, so a float works well in this situation.

What do you think the VALUE of pay_rate could be when we execute this statement? Is it 0? Or 0.00? Or is it NULL?

The answer is any of the above! Many compilers will return a value of 0 because you declared a float but gave it no value. However, you may also see NULL (meaning empty). When you declared the variable, all you did was tell C that you needed a table for 4 bytes and to save it for you. You never said who was sitting at the table. 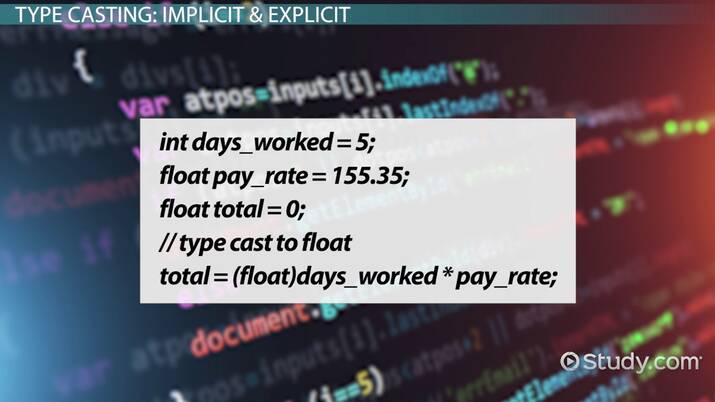 Try it now
Back
Coming up next: Math Functions in C Programming: Definition & Example

Let's try our code again and this time give it a value. There are two options, the first involves extra lines of code, but at the same time it is a good display of what you intend. The double backslashes indicate comments in the code:

The next option is to simply give the pay_rate a value right off the bat:

These terms may sound like C is up to something nefarious in the movie business. In reality, we're talking about the ability to type cast. This means that you can convert one variable type into another. Sadly, it only works for variables and not casting lead to gold.

One of the common methods is to convert an integer value up to a float or double. This might help us in the payroll program:

Here we have converted the integer to a float. C will change 5 to 5.0 and then accurately calculate the resulting value for total. This code we're looking at is an explicit type cast, because we told the compiler that we expect days_worked to be a float. To do that, we put (float) in front of the integer value we were elevating to float.

Another type cast is the implicit type cast. In this case you don't tell the compiler exactly what you want (you are not being explicit). There is no data type in parentheses. Instead, it would look like this:

The problem with this approach is that there's no indication to yourself or other programmers of the intent. The compiler is going to perform the type cast to what fits the data. If it thought double was better, it would type cast to double. Further, this action will happen even if it's a good idea or not.

With either type cast, there is a possibility of data loss.

A Note About Converting Down

Converting from int to float is an upward conversion, meaning you won't lose any data. Five is the same as 5.0 or 5.00000000000000. But what happens if you convert from double to float? In other words, a downward conversion?

Let's try it out and see what happens! A double can hold 15 decimal places; a float can hold 6. Given that, declare a double (with a value) and a float with no value:

When you compile this code, your compiler probably won't give you an error or warning statement. But now add the code to print to the screen. Here is the whole program for convenience:

If those values past the decimal point are important, this could be a very bad decision. In a company with millions of transactions, this may actually result in inaccurate reporting of financial matters.

All right, let's take a moment to review what we've learned. When we declare variables in C, we can assign a value to those variables. You can either declare the variable, and later assign a value, or assign the value right away when declaring the variable. C also allows you to type cast variables; that is, convert from one variable data type to another. An int can be converted up to a float; a double can be converted down to a float (but you might lose decimal places).

An explicit type cast, where the type is listed in parenthesis before the variable being converted, states which data type you are converting to, while an implicit type cast lets C do the work, picking the conversion that matches the data type. It will do this even if it isn't a good choice. With converting down, you may lose data (e.g., float to integer would lose all values after the decimal point).

Arrays of Structures in C Programming

Risks & Errors in While, For & Do While Loops in C

IF, ELSE, & IF-ELSE Statements in C Programming

Arrays of Structures in C Programming

Risks & Errors in While, For & Do While Loops in C

IF, ELSE, & IF-ELSE Statements in C Programming