The ancient region of Mesopotamia is often called 'the Cradle of Civilization.' It is here that we see the earliest form of writing developed along with beautiful art and architecture. Mesopotamia was an area that once covered modern-day Iraq and parts of Syria, Turkey, and Iran. Within the region there were several cultures that competed for land and resources. 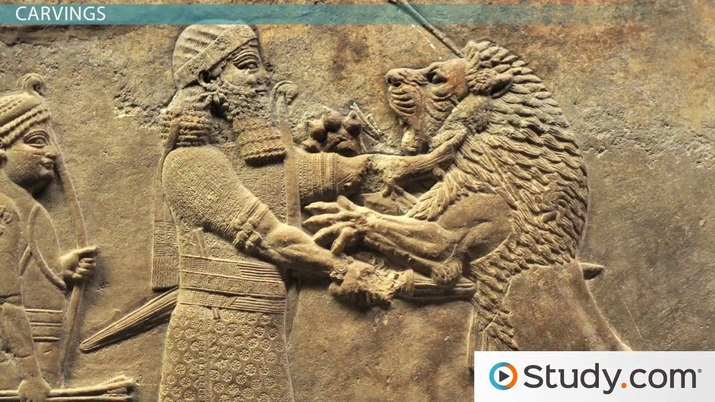 Coming up next: Hammurabi's Code: The Advent of Law, Prerequisites and Implications

During the first half of the millennium, the Assyrian empire held control over most of the region. The Assyrians were a culture of warriors who were very aggressive. The empire was mostly held under military control. The Assyrians approached their enemies with fierceness and showed no mercy in defeating them. The empire existed between roughly 1365 BC and 600 BC.

Due to the expansive size of their empire, the Assyrians gained access to many resources including stone and iron. The popularity of iron tools led to the creation of massive palaces. Although the availability of stone was ample, Assyrians chose to use mud brick to build many of their palaces in order to emulate the Sumerians. The Sumerians were a largely successful empire that preceded the Assyrians in controlling large parts of Mesopotamia. Many other groups mimicked Sumerian architecture and art to imply their success by comparison.

Each new Assyrian king in the early first millennium BC would either enlarge an old palace or build a completely new one. The new palaces would be bigger and more impressive than older ones to exhibit the king's power and wealth. Palaces were decorated with vivid colors and painted decorations.

In some palaces, like that of a king named Sargon II, mud brick was mainly used in construction, but stone slabs called orthostats were used at the base of the walls. Orthostats are a unique characteristic of Assyrian architecture.

One of the unique characteristics of Assyrian art is their relief carvings. They created elaborate relief carvings in stone which exhibited very extensive detail. The carvings often held images of battles and major events of war. These carvings also held depictions of the violent results of battle. This may even be the earliest form of narrative art, or art that tells a story. Many orthostats contained these dramatic images.

One example of detailed Assyrian carvings is the lamassu. The lamassu was a winged lion or bull with the head of a human. Lamassu were carved into the entrance of the palace. They were intended to ward off evil, looming over foreign ambassadors and allies. Minute detail, true to Assyrian form, can be seen in the curls of the beard of the human head, muscles and veins in the legs, and feathers in the wings.

Intricate detail can also be seen in cylinder seals. Cylinder seals were cylindrical shaped stones that contained symbols. The images on the seals were used to represent words or concepts. These seals would be rolled across wet clay tablets to leave an impression of their design. They could be used to produce unique signatures for commercial purposes. Images on Assyrian seals included men, gods, and animals.

Sumerian influence can again be seen in the construction of ziggurats. A ziggurat was a large building, similar to a pyramid, with several levels. The highest level of the ziggurat was reserved as a temple and was designed to be a resting place for its specified deity. Although the Assyrians borrowed the idea of the ziggurat from the Sumerians, they constructed their ziggurats to be even bigger.

Assyrians were a violent group of people who conquered much of Mesopotamia in their time. They took much of their ideas for art and architecture from their successful predecessors: the Sumerians. They took what the Sumerians created and made it bigger, creating massive palaces, detailed carvings, and huge ziggurats.

After finishing this video students should be able to:

The Architecture of the Early Christian Church