Transmission is the action of transferring or moving something from one position or person to another. A letter can be handed to you, received in the mail, read to you, or received by via email. These are all different methods of transmitting the letter. Likewise, in information systems, data transmission is the transferring of data from one system component to another. There are different types and methods of data transmission. 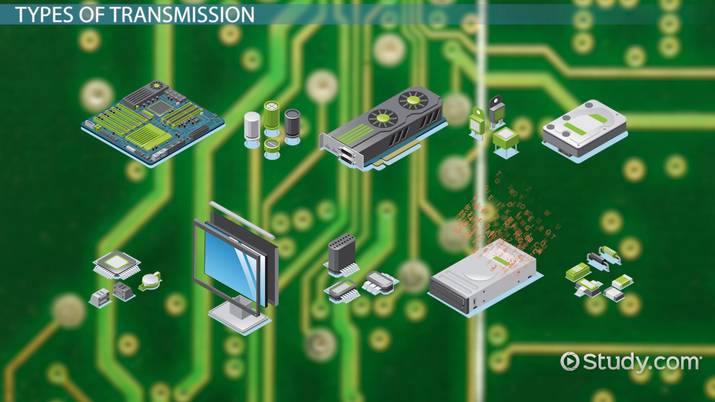 Information technology deals with the manipulations and transmission of data and digital signals. Data is usually in the form of bits and bytes. A byte is a unit of data (digital information) consisting of 8 bits.

The word synchronous refers to things happening at the same time. This holds true for synchronous transmission within the context of information technology. Synchronous transmission is, therefore, defined as the process by which data or a signal is transferred from one application system or device to another at constant periods or intervals, usually monitored by a clock. This means that the transmitting and receiving systems send and receive data at the same rate or speed. They are in sync. An example of this is copying data from one file location to another:

In this diagram, data is being transmitted from A to B, A being the sender and B being the receiver. A couple of sync data packets initialize the transmission process. The sync packets, once received by the receiver, are decoded and serve to synchronize the receiving clock with the sending clock. Once synchronization is achieved, sending and receiving commences.

Remember that a computer system is made of different components all working together to process information. As such, the computer is characterized by a constant stream of data and signals between its components. Because of this, a bus system of communication is another mode of data transmission used between the corresponding components. City buses serve to take people to different destinations all around town, and a bus can serve multiple locations.

The same concept applies to bus cycles in technology. They can be accessed and used to service different components within the computer system, with clocks used to synchronize flow and keep streams flowing smoothly. A bus cycle is therefore defined as the time it takes to complete a single transaction between one component and another. An example is a single read/write operation. The transmission is done in synchronization with the computer's clock.

In the example we just covered, the sender and receiver do not transmit on synchronized clocks. The data packets are given start and stop bits which serve as an indication of the commencement of a data block and the end of it. The timing of each data block is therefore determined by the start and stop bits.

The computer's software, programs, and components make up a digital system. Like any other system of working components, there must be a common set of rules and regulations governing components. These are known as protocols. Protocols are a set of rules that specify how components communicate with each other. Thus, protocols can be synchronous or asynchronous.

Bandwidth is all about the capacity to transmit. If you compare a fireman's hose with your kitchen faucet, you will see that the fireman's hose can transmit a lot more water in a minute than your kitchen faucet can. It is all about capacity. Simply put, bandwidth is the capacity a computer connection has to carry a certain amount of data within a certain frequency or time frame. The frequency is normally measured in bits per second. The higher the number of bits per second the faster the data is transmitted and higher the bandwidth capacity.

What is Bandwidth in Networking? | Meaning & Measurement