View bio
The Atlantic Coastal Plain is located along the eastern and southeastern areas of the United States. In this lesson, learn about the land, wildlife, and features of this coastal area. Updated: 10/28/2021
Create an account

What Is a Plain?

Are you up for a road trip? Let's head to the beaches of the eastern and southeastern United States.

As we head east, you'll notice that the land becomes very flat. That's because this area that borders the Atlantic Ocean is a plain. A plain is a landform that is a large section of land that is level, without hills or mountains. Plains found near beaches are called coastal plains.

The flat land from up in Massachusetts down to Florida and over to Texas is called the Atlantic Coastal Plain. Let's find out more about this large section of flat coast. 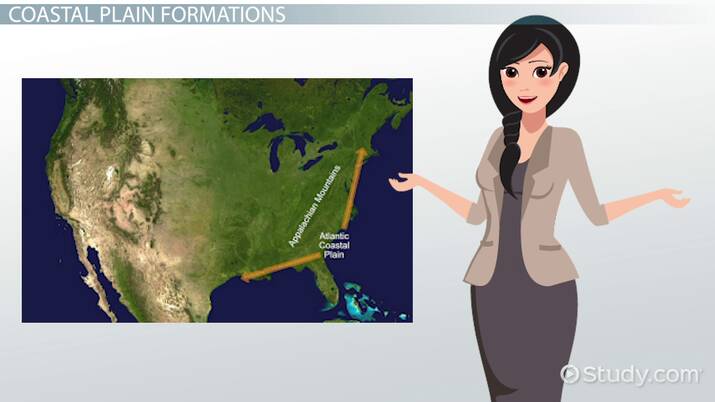 Coming up next: Strait Lesson for Kids: Definition & Facts

So how did this large plain develop? It took millions of years, actually. To the west of the plain is a mountain chain called the Appalachians. Over time, rocks and dirt from those mountains would be moved by weather and, eventually, they would collect at the Atlantic Ocean. This rock and dirt is called sediment and as it collected, it would spread out in a flat manner.

You can probably guess on our road trip that you will see many beautiful beaches and lots of flat land, but what other things might you see? The soil of the Atlantic Coastal Plain is generally poor, but it can grow certain crops like cotton and tobacco. Plus, the warm temperatures far south make Florida perfect for growing citrus fruit like oranges.

Off of the shores of states like Louisiana, Alabama, and Texas, a major resource found in the coastal plain is petroleum. This is a natural material found underground that can be drilled and used to make fuels like the gas in your car. On our road trip, you might see a large off-shore drilling site where petroleum is gathered.

Do you like seeing wildlife? If so, you'll notice quite a bit of nature on our road trip! The Atlantic Coastal Plain is home to all kinds of animals. Coastal birds including gulls, egrets, and herons often hang out in swampy areas along the coast looking for food. They might catch a shrimp or fish for dinner.

Further north along the coast of Massachusetts, many people like to trap crab and lobster for their own seafood dinner. And to the south in states like Georgia, Florida, and Louisiana, watch out for animals like alligators and armadillos.

This plain was formed by the collection of sediment (rock and dirt) over millions of years, and today many different forms of wildlife call it home. The Atlantic Coastal Plain has areas where specific crops can be grown, like citrus fruit, cotton, and tobacco.

Petroleum, an underground material used to make gas, is drilled off the southeastern United States shores. Animals of the Atlantic Coastal Plain include several species of water bird, crab and lobster, and even alligators.

This activity will help you assess your knowledge of the features of Atlantic coastal areas.

True | False 1. Plains refer to a large, leveled landform where no mountains are present.

True | False 2. A large collection of fine particles, particularly rock and dirt, makes up a hill.

True | False 3. Crocodiles are most likely found in the northern part of the Atlantic Coastal Plain.

True | False 4. Seagulls and herons flock in the Atlantic coastal plain to look for food.

True | False 6. Mountains that have been subjected to extreme weather conditions may produce sediments.

True | False 7. Plain landforms could be found in the western and southeastern coasts of the United States.

True | False 8. The sediments from the Apachian Mountains, deposited over time, created the Atlantic Coastal Plain.

The Five Geographic Regions of Georgia