Kristin has an M.S. in Chemistry and has taught many at many levels, including introductory and AP Chemistry.

The Size of an Atom

When you picture an atom, you probably see a bunch of protons and neutrons crammed together in a tiny little nucleus surrounded by a bunch of electrons zipping around the outside of a nucleus. It should make sense that the size of an atom is really dependent on how far away the electrons are - more specifically, how far away the outer electrons, or valence electrons, are. If they are zipping around really close to the nucleus in the first energy level, the atom will likely be very small, and if the valence electrons are flying around way out in the fifth energy level, the atom will be very large. The size of an atom is dependent on how much space the electrons take up.

But if electrons are always moving, and we never really know exactly where an electron is at any given time, how do we measure the size of an atom? You may think of an atom as being a small, hard sphere, when in reality, its outer boundaries are very difficult to define.

Measuring an atom's size is like measuring the size of a marshmallow: It depends on how it's measured. Is it apart from the rest, or is it squished into its packaging? When the size of an atom is measured, it's important to specify if it's an isolated atom, or if it's one that is bonded to something else. Typically, the atomic radius is measured as half the distance between the nuclei of two bonded atoms. This measured radius is often slightly smaller than an atom's actual radius, but because the nucleus of an atom is very well defined and easy to detect, this measurement is the most often used.

The rest of this lesson will be focused on the trends that the atoms have in size as you move down a group or across a row on the periodic table. A trend is just a tendency to change in a predictable way. We can use these trends to compare the relative sizes of two different atoms on the table. 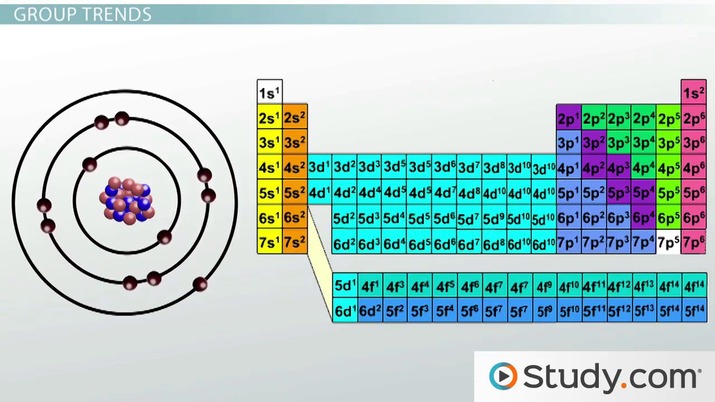 Coming up next: Ionization Energy: Trends Among Groups and Periods of the Periodic Table

Remember that a group in the periodic table is just a vertical column, so we will only be comparing elements in the same column. As you move down a group, you will notice that the principal quantum number increases by one. This means that electrons are going to be filling energy levels farther and farther away from the nucleus. You can think of energy levels like layers in an atom. As the number of protons in an atom increases, the number of electrons will also increase. These electrons need room to move around, and each energy level can only hold so many electrons. So at the start of each row on the periodic table, a new energy level has to be 'opened' for these new electrons to be added.

For example, if we compare elements in the first column on the periodic table, hydrogen has one electron, and it is located in the first energy level. Lithium has three electrons: two of them filling the first energy level, and one of them (the valence electron) needing to be added to the newly created second energy level. Finally, let's compare this to sodium, with 11 electrons. Two of them will fill the first level, eight will fill the second level, and one (the valence electron) will need to be added to the newly created third level. Because each added level is farther and farther away from the nucleus, the atomic radius increases as you move down a group on the periodic table.

Next, we'll compare atoms across a period. Keep in mind that as you move across a row on the periodic table, electrons in atoms will be added to existing energy levels. It's only when you move down a row that new energy levels, or layers, need to be added. So if electrons are just filling existing energy levels as you move from left to right on the table, are all atoms in a period the same size? They are not, because of one key factor: As you move from left to right on the periodic table, the atomic nucleus gains more and more protons. (Well, it gains more neutrons too, but they won't matter in this situation.)

The added protons are important here, because a proton has a positive charge. As this positive charge in the nucleus increases, it will increase the 'pull' of the outer electrons, because electrons have a negative charge. A very positive nucleus is going to pull in outer electrons more than a less positive nucleus. So if atoms have the same number of energy levels, the atom with the more positive nucleus (the one with more protons in it) is going to be smaller than the atom with fewer protons. This means that as you move from left to right across the same period on the periodic table, the atomic radius will decrease due to the increase in the number of protons pulling in those valence electrons located in the same energy level.

Now, what happens when an atom becomes an ion? Atoms become ions by either gaining or losing electrons. We go into more detail on what causes them to gain and lose electrons later, but it is important to know that if an atom gains electrons to form a negative ion, that ion will be larger than its atomic counterpart. For example, fluorine (F) is going to be smaller than fluoride (F-). On the other hand, for atoms that lose electrons to form a positive ion, that ion will be smaller than its atomic counterpart, because it has lost something. So sodium (Na) is going to be larger than sodium ion (Na+).

One really important thing to mention here is that these are just trends. As with many rules in chemistry, there are some exceptions. Don't worry about memorizing the exceptions, but do feel comfortable with explaining what the trend is and why.

So to review, as you move from top to bottom in the same group, or column, on the periodic table, the atomic radius will increase, because new energy levels are needed to hold the electrons. These extra 'layers' provide a much larger atom. However, as you move from left to right in the same period, or row, on the periodic table, the atomic radius will generally decrease. Atoms will have the same number of energy levels, but the more positive protons in the nucleus will have a greater pull on the negative electrons, bringing them farther in.

Atomic and Ionic Radii: Trends Among Groups and Periods of the Periodic Table
Related Study Materials

What is Energy? | The Study of Energy