Lesson Transcript
Instructor: Felicia Fullilove
We know all matter is made of atoms, but how is the mass of an atom expressed? Explore this lesson to learn more about atomic mass units (amus), carbon-12, and amu to kilogram conversion!
Create an account

What Is an Atom?

How much do you weigh? No need to answer out loud, but whatever the answer, I am sure the amount was expressed in pounds or kilograms. What are you made of? You may answer organs, blood, or bones. The simplest answer, however, is atoms and molecules. An atom is the smallest constituent of a chemical element that has all the properties of an element. Atoms comprise every single piece of matter. From your sofa to the sandwich you ate yesterday, atoms in multiple combinations, or molecules, are all around us. But how is the mass of an atom expressed? In this lesson, we will learn more about atomic mass units. 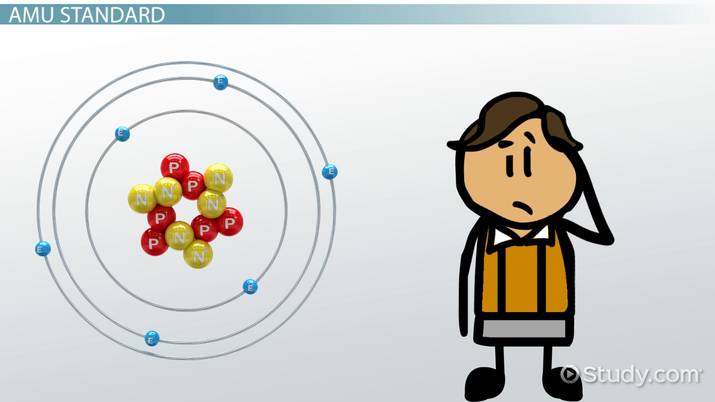 Coming up next: What Is Motion? - Definition & Equations

Why is carbon the standard? Good question! Carbon is commonly combined with other elements; additionally, the carbon-12 isotope is highly abundant in nature. After many years of arguing, chemists and physicists agreed that carbon-12 would be the best unit of measurement for atomic masses. Previous standards included hydrogen and oxygen; however, scientists had difficulty using these elements as standards due to the distribution of their isotopes.

The mole is a base unit that describes the amount of a substance. You can have a mole of anything: atoms, baseballs, and even carrots. According to the National Institute of Standards and Technology (NIST), the mole is 'the amount of substance of a system which contains as many elementary entities as there are atoms in 0.012 kilograms of carbon-12.' The number of atoms or molecules in one mole of substance is known as Avogadro's constant (Na or L). Avogadro's constant, Na, is an experimentally defined number of 6.022 * 10 ^23 entities per mole (remember entities can be atoms, baseballs, or carrots).

Believe it or not, mathematically, moles and Avogadro's constant bring us back to atomic mass units.

Dividing both sides of the equation by 12 we are left with:

This means that atomic mass units can be easily converted to kilograms or grams. For example, carbon-12 has a mass of 12 amu. By multiplying 12 amu by 1.66 x 10^-27 kg/amu we find the mass of carbon-12 in kilograms is 1.99 * 10^-26 kg. This conversion can be used to convert atoms and molecules from atomic mass units to grams and kilograms.

What is the Interstellar Medium?

How to Convert Grams to Amu

How to Calculate Boiling Point

What is a Quark? - Definition, Structure & Uses

What is Atomic Mass? - Definition & Examples