Meaningful bonds are critical for human development, and the most important type of relationship is that between child and parent or caregiver. Explore the definition and foundation of the attachment theories, including Bowlby's theory and the one Ainsworth later elaborated, and learn the importance of the internal working models of attachment on adult relationships. Updated: 08/21/2021
Create an account

All types of relationships, whether romantic, friendly, or parental, are important for human development. The most critical of these types, however, is that between the parent and child. Many theorists, including Freud and Erikson, emphasized the importance of a stable parent-child relationship in order for normal development to occur. 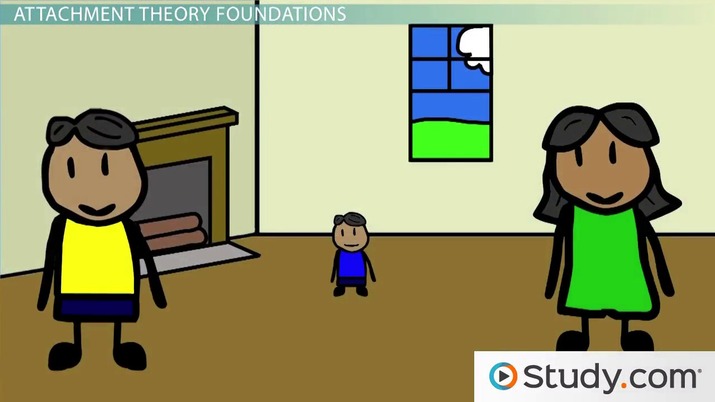 Coming up next: The Strange Situation Test: Ainsworth's Attachment Theory for Infants

Attachment theory is based primarily on ethological theory, or how animals behave; evolutionary theory, or how humans evolve; and psychoanalytic theory, which is the theory that human behavior is driven by unconscious urges and instinctual biological drives.

According to Bowlby, attachment is defined as a strong emotional tie that bonds one person intimately with another person. Attachment is also a behavior system through which humans regulate emotional distress, such as being threatened. Behaviors which draw humans to security in threatening situations underlie attachment theory. Let us try to understand this through an attachment scenario.

A baby forms an attachment with his or her parent at birth. This attachment develops over time, and by around six to seven months, a strong bond is formed. We know this attachment has occurred because the child tries to maintain proximity to the parent, may follow the parent around, saves the biggest smiles for the parent, becomes upset when the parent is gone, and seeks the parent when he or she feels threatened or scared.

This scenario illustrates how attachment theory draws from ethological theory and research. Biological predispositions and tendencies, such as babies staying close to their mothers in the wild for protection, have contributed to human survival. This form of imprinting, or learning in which a baby animal follows and becomes attached to the first moving object it encounters (usually the mother), is critical during the early part of life and establishes the groundwork for attachment.

Bowlby points out that young children may not become imprinted to their mothers, but they will definitely follow loved ones around. Young children also engage in other behaviors that ensure their caregiver or parent will love them, stay close, and meet their safety needs, such as smiling, cooing, crying, and babbling.

American developmental psychologist Mary Ainsworth elaborated on Bowlby's work through her own experiments, such as the Strange Situation Protocol, in which she explored anxieties and identified types of attachment. This research and the types of parent-child attachment Ainsworth found are discussed in another lesson.

According to Bowlby, there is a sensitive period for attachment to occur, and that is within the first three years of life. Attachments are not automatic either. In order for an attachment to occur, there must be a reciprocal interaction between parent and child. If a caregiver is unresponsive to the child's attempts for affection or cries, the child may become unresponsive to that caregiver's presence.

Securely-attached infants who have received attention, care, and responsiveness from caregivers will develop internal working models that suggest they are lovable and that others can be trusted to care for them.

However, insecurely-attached infants who receive little attention or are abused will develop internal working models that suggest people can't be trusted and that they are difficult to love. These types of working models can cause problems in later relationships, such as jealousy, overdependence, or shying away from relationships altogether. An insecure attachment in a child doesn't necessarily persist through that child's life because other relationships can have different attachment patterns later on.

In summary, attachment theory was developed by Bowlby and elaborated by Ainsworth and is based on ethological, evolutionary, and psychoanalytical theories and research. These researchers indicated that attachments unfold through an interaction of biological and environmental forces during a sensitive period early in life, within the first three years.

The first attachment relationship, the one between infant and parent or caregiver, shapes later development and the quality of later relationships. Finally, internal working models of self and others, formed via early-life attachments, provide the foundation for relationships through one's lifetime.

The lesson above should make it easier for you to:

Emotional Development Through the Lifespan