Kids tend to throw temper tantrums and act hyper. But what happens when a kid goes beyond what's considered normal? In this lesson, we'll look at some psychological disorders often diagnosed in childhood: attentional and behavioral disorders.
Create an account

Cherry has a problem. She's in middle school, and she can't seem to settle down and act like the other kids. She answers questions before the teacher even finishes asking them and can't wait for her turn. She is easily distracted by anything around her, and she has trouble finishing work or following through on things.

Not only that, Cherry can be mean. When she gets angry, she will start a fight or retaliate in another way. Last week, she went into her classmate's desk and broke every one of her pencils in half. 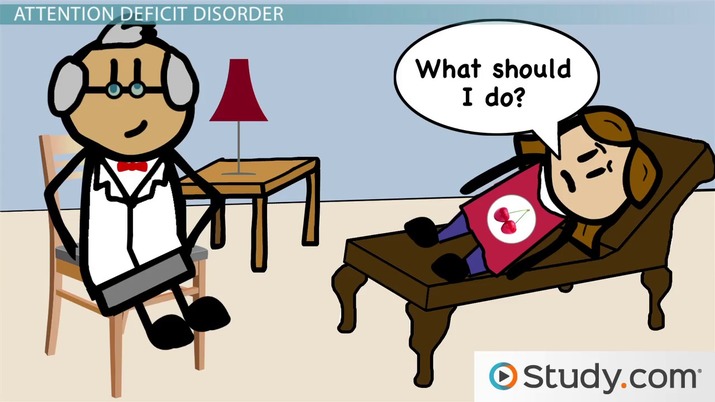 Remember that Cherry has trouble concentrating on things. She also gets so excited that she answers questions before the teacher finishes asking them. She has trouble finishing and following through on things and can't seem to wait for her turn.

Cherry might be suffering from attention deficit disorder, or ADD, which is a psychological disorder characterized by inattention and impulsivity. Cherry is inattentive when she has trouble concentrating or trouble finishing and following through on things. She's also easily distracted, which is a major part of inattention. She is impulsive when she answers questions before the teacher finishes asking them and when she can't wait for her turn.

In addition to the ADD that Cherry might be suffering, there is another, overlapping disorder known as attention deficit hyperactivity disorder, or ADHD. Like ADD, ADHD is characterized by inattention and impulsivity, but ADHD patients are hyperactive as well. For example, if Cherry was restless or fidgeted a lot, she might have ADHD.

ADD and ADHD are commonly diagnosed in children and teenagers, but they can be present and diagnosed in adults as well. Both ADD and ADHD can be treated with medication as well as behavioral therapy. Cherry, and people like her, should see a psychiatrist or psychologist to get treatment.

Remember that ADD is not Cherry's only problem. She can also be mean. She starts fights and destroys people's things to get back at them when she is angry. Cherry might be suffering from a behavioral disorder as well as ADD. These are disorders that involve behavioral issues that are beyond the norm.

There are two common behavioral disorders that are found in children and adolescents, like Cherry. The first is oppositional defiance disorder, which involves negative, disobedient, or defiant behavior that is beyond the norm for the age group. Yelling, arguing with adults, and losing his or her temper are all symptoms of ODD.

Cherry does all of those things, but there's more to it than that. ODD is usually limited to verbal outbursts. But Cherry can get physically violent. She might have conduct disorder, which is more serious than ODD and involves a persistent pattern of disregard for the rights of others.

Children and adolescents with conduct disorder often show aggression to people or animals, like when Cherry starts a fight; property destruction, like when she broke her classmate's pencils; lying or theft; and serious rule violations, like running away or truancy.

In adults, conduct disorder is usually not diagnosed. Instead, an adult who violates others rights is usually diagnosed with antisocial personality disorder.

Like ADD and ADHD, ODD and conduct disorder should be treated by a professional. Cherry and her parents will likely want to see a mental health professional who specializes in behavioral issues in adolescents.

Mental disorders, or psychological disorders, are those that involve unusual thoughts, behaviors, or feelings. In children and teens, a common psychological disorder is attention deficit disorder, or ADD, which involves inattention and impulsivity. Attention deficit hyperactivity disorder, or ADHD, also includes hyperactivity. Behavioral disorders common in children and teens include oppositional defiance disorder, which involves disobedient behavior, and the more serious conduct disorder, which is characterized by a disregard for the rights of others. All of these can and should be treated by a psychologist.

When this lesson is ended, you should be able to: