When nationalism reached the Balkan Peninsula, it catalyzed Serbian independence and unrest in Europe. Discover how questions of nationality and central power disputes lead to assassination and Austria-Hungary's declaration of war on Russia. Updated: 11/06/2021
Create an account

Late in the 19th century, nationalism finally came to the Balkan Peninsula. Having been a stronghold for the Austrian and Ottoman Empires for some time, things were definitely changing. For the Austrians, it meant giving many ethnic minorities more power, including a name change to recognize the power of the Hungarian part of the empire. For the Ottomans, it meant a great deal of territory loss.

Much of this was encouraged by the traditional rival of the Ottoman Empire: Russia. For the Russians, this had the added benefit of liberating many other Slavic nations. As Russia was itself Slavic, it was thought that these countries would be especially friendly to Russia. In short, while the Austrians had managed to adapt, the Ottoman Empire was quickly proving true to its name as the Sick Man of Europe due to its extensive territorial losses.

Among the first of these new states to gain its independence was Serbia, and Slavic heritage aside, the Serbs never forgot that the Russians had been instrumental in freeing them from Ottoman rule. Russia quite appreciated having such a fervent admirer and worked to guarantee Serbia's independence. However, many people who wanted to be a part of Serbia still lived in the two other empires: Austria-Hungary and the Ottoman Empire. Needless to say, this could not end well. 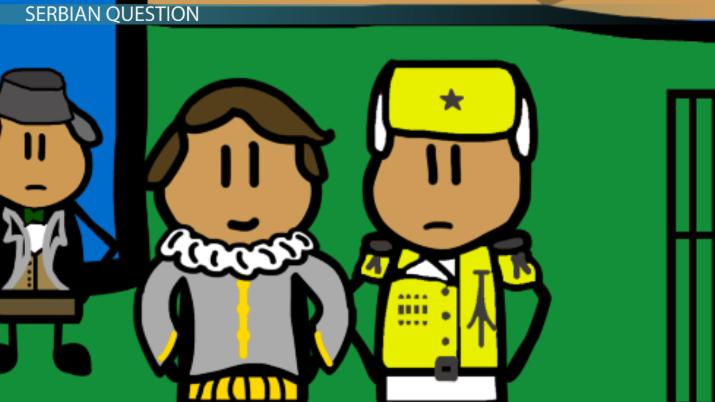 Coming up next: The Powder Keg of Europe During WWI

For a variety of reasons, from language to terrain to religion, the Balkan Peninsula has many different ethnic groups. While these groups could not agree on much, they all knew that they didn't want to be ruled from the Austro-Hungarian capital at Vienna or the Ottoman capital of Constantinople. Many of these groups were encouraged by the Serbs and in fact, a number of those Serbian minorities in other empires really wanted to join Serbia. This meant that over the rest of the 19th century and into the 1910s, a number of small wars were fought which not only expanded Serbian territory, but created new countries like Romania, Bulgaria, and Albania.

These countries would slowly find their own way, with Bulgaria siding against the Russians, while the Romanians remained loyal. However, nothing was as unshakable as that first relationship with the Serbs and the Russians. It would soon be seen just how strong that relationship was.

Germany and Austria-Hungary both hated Russia and were weary of the newfound influence that country had. As a result, in 1879, the two signed the Dual Alliance, which promised mutual aid if attacked by Russia and neutrality if attacked by anyone else. Suddenly, there was a major block in the middle of Europe, aptly named the Central Powers. Also, Austria-Hungary was eager to maintain its empire which, like the Ottomans, was actually made up of many different ethnicities. All this talk of nationalism that the Russians were supporting just sounded dangerous to the Austro-Hungarians.

Ultimately, these intricacies mattered little. When war came in 1914, the only thing that went according to plan was the domino effect of so many countries declaring war on each other. Serbia was viewed as the supporter of the assassins who had murdered the Archduke Franz Ferdinand, the heir to the Austro-Hungarian throne and therefore, the Austro-Hungarians wanted to conquer them.

However, Russia was sworn to protect Serbia, which meant Russia had to fight Austro-Hungary. Russia announced that it was mobilizing its army, so Austria-Hungary declared war. Germany had promised to declare war alongside Vienna if there was an attack from Russia. Finally, the French had agreed to attack Germany if Russia was attacked. From the perspective of many, it was as if a building slowly but deliberately collapsed all because of one bad beam.

Nationalism in the Balkans would be the ultimate cause for the spark that started World War I. Dating back to the 1870s, once-small nations gained their independence from the Ottomans, these states constantly agitated for more land and the ability to free their fellow Serbs, Bulgarians, Albanians, or whatever culture was at play. With Serbia, an especially strong alliance was formed with Russia, which was the first domino in a series of events in 1914 that led almost all of Europe to war.

The following are goals you might pursue after studying the topics above:

The Schlieffen Plan in WWI | What was Germany's Military Plan Called?