The Axis IV in the DSM-IV refers to environmental and psychosocial factors around an individual. Discover the five axes of the DSM-IV, take a closer look at the categories in the Axis IV through some examples, and learn about environmental and psychosocial factors and how they are related to the treatment and diagnosis of mental disorders. Updated: 09/06/2021
Create an account

An Example of the Axis Scale

Imagine that you are a clinician, and a 50-year-old male client walks into your office and reports feeling extremely sad and empty for the past month. He also says that he spends most of the day in his room crying and has no interest in any activities. You may immediately think he's experiencing symptoms of depression and consider diagnosing him with major depressive disorder; however, you find out that the client's wife of 30 years died one month ago, right around the time the client's symptoms started. Since the client's symptoms can be accounted for by the normal grieving process associated with losing a spouse, he no longer qualifies for a diagnosis of major depressive disorder, which is an Axis I disorder. Instead, you record death of spouse, which is an Axis IV disorder. 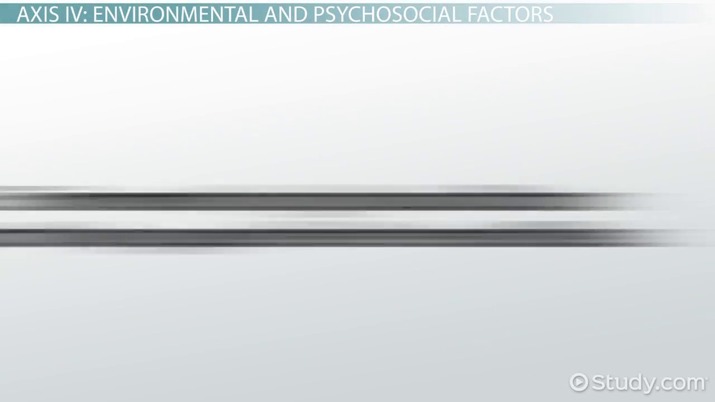 Coming up next: Behavioral Disorders in Children: Definition & Symptoms

The Five Axes of the DSM

Please note that the DSM-V no longer uses the five-axis system of the DSM-IV. However, an understanding of the axes provides useful context to the current non-axial diagnostic practices of the DSM-V.

The fourth edition of the Diagnostic and Statistical Manual of Mental Disorders (DSM) was used by psychologists and other mental health professionals throughout the United States to assist with the classification and diagnosis of mental health disorders.

The DSM-IV categorizes disorders according to the following five axes:

Environmental and psychosocial factors are negative life events and difficulties that may affect a client's mental health. Such factors are important to the understanding, treatment and diagnosis of mental disorders, and these factors can also affect the client's prognosis.

Environmental and psychosocial factors don't always appear before the mental illness, as in the example above. These factors can also be a consequence of the client's mental disorder. For example, a person with schizophrenia could hear voices telling him not go to work or else he will die. As a result, the person may stop going to work, and, in this case, the unemployment is a direct result of the auditory hallucinations that accompany schizophrenia.

It is important to list all psychosocial and environmental factors that are relevant to the client's mental disorder. Usually, only events that have happened during the year are recorded, although there are instances where you may choose to go beyond a year if the factors are contributing to the client's mental disorder or are important to treatment. For example, if you are working with a 20-year-old client who was sexually abused as a child and now suffers from post-traumatic stress disorder (PTSD) because of the abuse, you should document sexual abuse on Axis IV, since it is relevant to the treatment of PTSD.

The DSM-IV lists Axis IV factors into the following groups:

Axis IV of the Diagnostic and Statistical Manual of Mental Disorders contains environmental and psychosocial factors that may affect clients' mental health. These factors are important to the understanding, treatment, diagnosis, and prognosis of mental disorders. Occupational problems, housing problems, and financial problems are some of the factors that are listed on Axis IV. It's important for clinicians to ask their clients about their environmental and psychosocial problems - they may be surprised by what they find.

What is Clinical Assessment in Psychology? - Definition and Purpose