Lesson Transcript
Instructor: John Williams
In the nervous system, neurons communicate cell to cell through electrochemical stimulation, which is mediated by a part of the neuron called the axon. Discover the structure and function of an axon and how it's used in cell communication. Updated: 09/15/2021
Create an account

The nervous system communicates through the use of cells, called neurons. These cells participate in cell-to-cell communication for the purposes of regulating bodily processes. This is done through the generation of electrochemical stimulation that relays from neurons to other neurons and effector (target) cell. The delivery of this stimulation is going to be mediated by a portion of the neuron known as the axon. 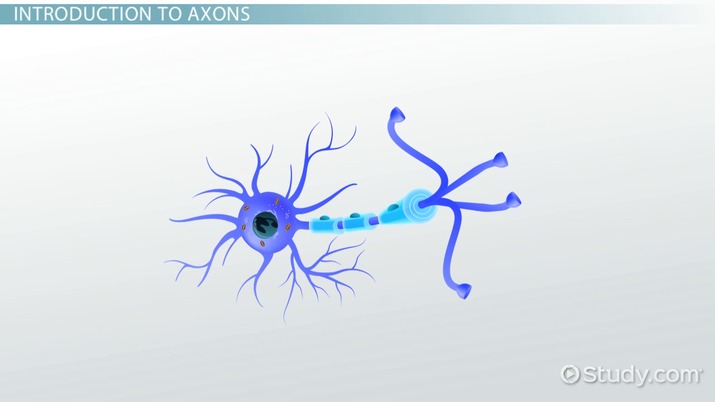 Try it now
Back
Coming up next: Constriction: Definition & Meaning

Axons are extended regions of the neuron cell membrane. It starts from a portion of the cell body, known as the axon hillock. From there, the axon extends towards the target cell to what is known as the terminal. Along the cell membrane of the axon will be ion channels and ATP-driven pumps that will regulate ion concentrations within the axon. These ion concentrations will establish the resting membrane potential, which is the electrochemical charge of the membrane when the neuron is at rest.

Some axons will also have additional structures to assist with communications. In areas of the nervous system that require faster communication, the axons will contain insulation, known as myelin sheaths. This insulation speeds up the transmission of cell-to-cell communication and stimulation. Not all axons will have these sheaths, but the ones that do function quicker.

At rest, the membrane potential of an axon is typically -70 millivolts. This charge is established by ATP-driven pumps in the membrane known as sodium/potassium pumps. This pump ensures that more positive ions are outside of the membrane compared to inside of the cell. When the neuron depolarizes, or becomes positively charged, it will transmit this communication down the axon by way of voltage-gated, which means electrically controlled, ion channels that open up to allow for the charge to relay along the axon. This takes place until the charge reaches for the axon terminal.

The axon terminal is the site of neurotransmitter release. Neurotransmitters are chemical messengers that are released from the axon and received by effector cells. This process is critical for delivery of the message to the cells and tissues that are being controlled. The terminal, then, is the final point of stimulation in the axon before the charge is delivered.

The axon is an extended region of the neuron cell membrane and the portion of the cell responsible for delivering cell-to-cell communication. Neurons are the cells that communicate and the axons are merely a smaller part of the larger story. This is sometimes sped up by myelin sheaths, which are a type of insulation that speeds up the transmission of cell-to-cell communication and stimulation. Through transmission of electrical charges and the release of neurotransmitters, axons are able to control target cells in order to regulate bodily processes. Beginning at the axon hillock, this process is completed through the movement of ions. Ion concentration will establish the resting membrane potential, which is the electrochemical charge of the membrane when the neuron is at rest and is approximately -70 millivolts. Axons are the key components of neuronal function for the nervous system and other systems under nervous control.

Dendritic Cell Function | What are Dendrites?

Axon Hillock Overview, Function & Purpose | What is the Axon Hillock?

Cell Body Function & Types | What is a Neuron Cell Body?

Neuron Parts, Structure, & Function | What is a Neuron?

Forebrain Function & Structure | What is the Forebrain?

Medulla Function and Location | What Does the Medulla Do?