Gayle works for a large auto manufacturing plant in the Upper Midwest. One of her jobs is to negotiate with the union at the company. Brian was elected by the members of the union to negotiate on its members' behalf. Several years ago, Gayle and Brian had a relatively easy time hammering out a collective bargaining agreement, which addresses workers' wages, benefits and other terms and conditions of work.

Gayle and Brian are having a much more difficult time coming to a collective bargaining agreement this time. In fact, no progress has been made. Both sides are unwilling to compromise. The union wants higher wage increases and better insurance coverage than the company is willing to accept. After the last fruitless negotiation session, they both go back to their offices to decide whether to start playing hardball. Let's take a look at some of the tactics at their disposal. 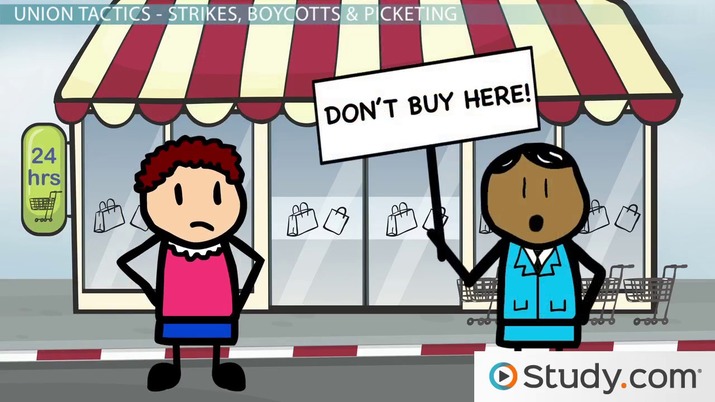 Brian must be careful to ensure that if he decides to call for a strike, it's permitted under the law. Sometimes the law will require that the union and employer undergo a cooling off period before striking is permitted. Sometimes the current collective bargaining agreement will have a no-strike clause where the union previously agreed not to use the tactic. In some circumstances, it may be flat out illegal to strike. For example, most public sector strikes are illegal.

Brian must weigh the strike option carefully. Contrary to what some believe, workers are not entitled to pay when on strike. Additionally, they are not even entitled to unemployment compensation unless state law specifically provides for it. You can think of striking as a game of chicken where the strikers are hoping that the employer will blink out of fear of financial disaster before they do.

Once the strike is over, the drama may not be over for the workers. In an economic strike, an employer does not have to immediately reinstate the strikers after the dispute is resolved. While they are still considered employees, the employer can make them wait for reinstatement until a vacancy opens up. There may be no vacancies due to a reduction in demand or employment of replacement workers during a strike. However, in an unfair labor practice strike, the striking employees must be reinstated by the company if they agree to unconditionally return to work. This is the case even if it means firing replacement workers to make room.

Brian can also consider a boycott. When employees conduct a labor boycott, they are trying to stop, or at least reduce, the company's customers from purchasing its goods or services as a sign of support for the employees. For example, employees may try to convince customers not to purchase the model of vehicles produced at their plant. The idea is that the threat of loss of revenue will pressure the company to make concessions.

Brian can also use picketing as a supplemental tactic. Picketing occurs when a group of employees gather outside the company to make the public aware of a strike or boycott. The idea is to try to create public awareness and support for the union's position.

Gayle is not without hardball tactics of her own. If the union strikes, she can engage in strikebreaking, which is an attempt by a company to disrupt or end a strike undertaken by employees without reaching an agreement with them. For example, Gayle can hire workers to replace the union workers during the strike called strikebreakers, often derogatorily referred to as 'scabs.'

Gayle can also go on the offensive with a lockout where the company shuts down operations. You can think of a lockout as the equivalent of a company striking its employees. The idea is to pressure employees to make concessions at the bargaining table so that they can go back to work and earn a living.

Not all hardball tactics are legal. Both the state government and the federal government regulate picketing to prevent violence, which has occurred in the past. For example, Brian can organize employees to picket in small groups to inform the public of a strike or boycott. However, federal law doesn't allow mass picketing to help reduce the danger of uncontrollable mobs. Such large crowds are also viewed by the law as inappropriately intimidating.

Private sector striking is generally permitted under the law. However, strikers cannot use violence against persons or property or even intimidation during a strike. Moreover, companies are not permitted to commit acts of violence against striking employees.

While boycotting and picketing the employees' company is generally permitted under the law, Brian cannot organize any secondary boycotts or secondary picketing, as these are illegal. These tactics involve going after neutral third parties, such as the suppliers to the company. For example, Brian cannot picket outside the tire company that supplies the tires for the company, nor can he arrange a boycott of the tire company.

Let's review what we've learned. An employer and union engage in the collective bargaining process to come to a collective bargaining agreement regarding the terms and conditions of the employees' work. If there is a deadlock in negotiations, either the company or the union may employ certain tactics to pressure the other side to concede bargaining issues.

Unions have several important tools at their disposal. Workers can strike, boycott and picket. A strike is a work stoppage. A boycott is an attempt to reduce or stop customers of the company from purchasing goods or services as a sign of support. Picketing is a demonstration outside the company to make the public aware of a strike or boycott.

Employers are not without tools to exert pressure. They can engage in strikebreaking by hiring replacement workers. They can also commence a lockout, which is a work stoppage so workers can't work.

The law places limits on these tools. Not all strikes are legal. Boycotts may be directed towards the company but not neutral third parties, such as the company's suppliers. Picketing is generally permitted in small groups but may not become violent. Companies cannot act violently towards striking employees.

Resolving Impasses in the Public Sector

Compensation & Benefits: Laws & Regulations | What is Law of Compensation?

Integrative Bargaining Overview & Examples | What is an Integrative Negotiation?

The Role of HR in Employee & Labor Relations