Sheila has a master's degree in geology and has taught middle school through university-level science courses.

View bio
In chemistry, any substance that feels slippery or tastes bitter and produces a pH level greater than 7 when dissolved in water is called a base. Learn more about the definition of a base in chemistry, the properties of bases, and examples of the uses of bases in everyday items, from soap to milk of magnesia. Updated: 09/22/2021
Create an account

What is a Base?

As seen on the pH scale, bases describe solutions with a pH greater than seven, and there is a range of how basic a solution can be. A base is the opposite of an acid. The 'H' in 'pH' stands for hydrogen. The origin of the 'p' in 'pH' is somewhat debatable, but we can think of pH as the power of hydrogen or the potential of hydrogen. pH is defined as -log(H+), or the -log of the activity of hydrogen. 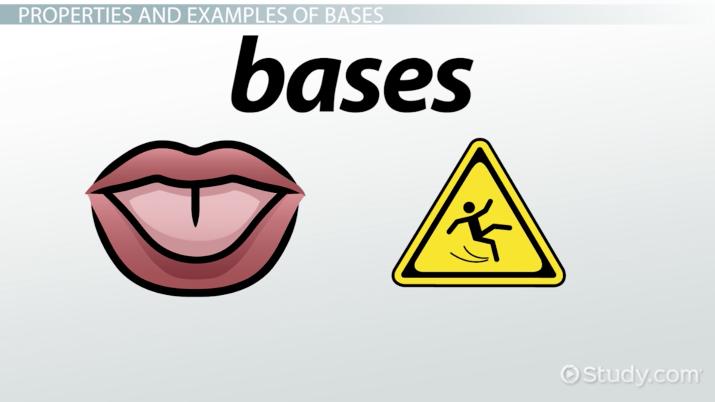 Coming up next: Equilibrium: Chemical and Dynamic

Properties and Examples of Bases

Bases tend to taste bitter and feel slippery. At home, we use bases as cleaning agents and as antacid medications. Common examples of bases found at home include soaps; lye, which is found in oven cleaners, for example; milk of magnesia; and Tums. Each has a pH value greater than seven, has the potential for accepting free hydrogen, and can neutralize acids.

Because bases are the opposite of acids, with acids releasing free hydrogen ions in aqueous solution and bases having the potential to accept those hydrogen ions, bases can be used to neutralize acids.

The calcium carbonate found in Tums works to neutralize stomach acid by dissolving into aqueous calcium and carbonate ions. Acidity-causing, positively-charged free hydrogen ions attach to the ions, forming bicarbonate. The concentration of positively-charged free hydrogen ions is reduced, thereby reducing the acidity and raising the pH level in your stomach.

A similar acid-neutralizing series of reactions is happening on a much larger scale in our oceans. As air comes into contact with the surface of the ocean, gases in the air get dissolved into the ocean water. One of these gases, carbon dioxide, is a naturally-occurring component of air that also has a continually increasing, human-caused component.

The increasing carbon dioxide in the air is putting pressure on the ocean's ability to neutralize acid. As carbon dioxide dissolves into the ocean, it reacts with water to form carbonic acid. This drives a hydrogen ion to dissociate, forming bicarbonate, which can further dissociate a hydrogen ion to form carbonate. Ideally, adequate carbonate will be available for the formation of calcium carbonate by marine organisms. It's the same substance found in Tums, and it's what makes up the shells of much of Earth's marine life.

We learned from our use of calcium carbonate as an antacid medication that it will dissolve to form calcium and carbonate, and the carbonate ions join hydrogen ions to neutralize the acid. This same process happens in the ocean. With increased pressure of carbon dioxide on the ocean, more hydrogen ions are formed, and the pH of the ocean decreases.

Bases are substances that, when dissolved in water, have a pH level greater than seven, taste bitter, and feel slippery. They react with acids by accepting H+ ions, giving bases the ability to neutralize acids. Bases are commonly found in cleaning products and antacid medications. In nature, an important example of a base neutralizing acid occurs in the ocean.

Quick Guide to Base Solutions

You've finished the lesson! Keep reviewing until you feel ready to:

During this lab activity, students will be testing the pH of various substances to determine if they are an acid or a base. To do this lab, you'll need several small cups for samples of the liquids and a pH paper indicator, such as litmus paper. This is available from many scientific or educational suppliers and is relatively inexpensive. If students are struggling to come up with liquids to test, consider some known bases, such as cleaning supplies, dissolved baking soda, liquid soap, or toothpaste.

In this lab, you'll be using a paper pH indicator to test the pH of various substances. Some substances are already listed in the table below, but you should also choose three additional substances to test. Prior to testing, record in the table if you think the liquid will be an acid or a base and why. Then, test it by inserting the paper into the liquid according to the directions on the package. Then, record the color change of the paper, the pH based on the indicator, and whether the substance was an acid or a base. Then, answer the reflection questions below.

Students should recognize that some of their hypotheses were incorrect and should be able to come up with reasons why they had those preconceived notions. For example, students might have thought that acids are harmful and wouldn't be in our food and thus juice must be a base. Students should also see that all of the acidic solutions tend to be tart or sour. Bases tend to be bitter but it is unlikely that students would have tasted any that are tested except for toothpaste. Students might find that acids are more common because bases tend to be used as cleaning products, which may be kept away from them in the house.

What is Acid in Chemistry? - Definition & Overview

What is Krypton? | Krypton Atomic Number and Symbol

Functions of the Lymphatic System

What is Salt in Chemistry? - Definition & Formula