In this lesson, we'll look at formulas and rules for differentiation and integration, which will give us the tools to deal with the operations found in basic calculus. At the end of the lesson, you'll also have the chance to test your new knowledge with a short quiz.
Create an account

It's your first day in the kitchen, and you want to bake a cake. What if the recipe simply states to 'just add butter'? Your response would probably be: 'Hey, not enough information! We need formulas, like three teaspoons equal one tablespoon. We need rules like, bake until cooked.'

Although calculus is usually not used to bake a cake, it does have both rules and formulas that can help you figure out the areas underneath complex functions on a graph. In this lesson we will focus on the formulas and rules for both differentiation, the method by which we calculate the derivative of a function, and integration, the process by which we calculate the antiderivative of a function. 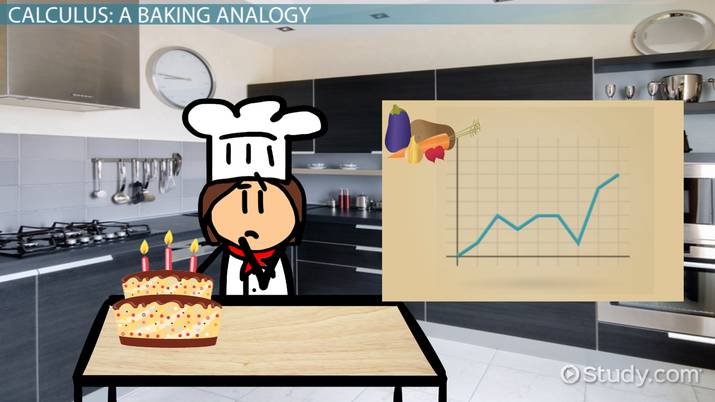 Coming up next: Radians & Degrees on the CLEP Scientific Calculator

Although these and other notations are used for differentiation, we will use the d by dx and the prime notations in this lesson.

Here are some differentiation formulas:

This rule works even when n is not an integer. For example, the square root of x is x raised to the ½ power. Using the power rule for differentiation, we see how this works out in the example equation here:

As an example, let's show that the derivative of a constant is consistent with the power rule by noting that x^0 is equal to one. When we differentiate the constant C, we are in fact differentiating Cx^0. What you're looking at below is what we wanted to show:

The notation for integration takes the form of:

Here are some integration formulas for definite integrals:

Just as with differentiation, there is a power rule for integration. The integral of x raised to a power n is x^(n+1) divided by (n+1) plus a constant C. You can see this in our example below:

The substitution rule allows us to simplify an integral when we can determine a variable u that can be substituted for a function in the integral.

Let's look at another example and find the following answers you can see here:

In basic calculus, we learn rules and formulas for differentiation, which is the method by which we calculate the derivative of a function, and integration, which is the process by which we calculate the antiderivative of a function. These formulas allow us to deal with powers of x, constants, exponentials, natural logarithms, sines and cosines. The rules of differentiation include the following:

The rules of integration include the following:

Applying the Rules of Differentiation to Calculate Derivatives

How to Find the Major Axis of an Ellipse