Stephanie taught high school science and math and has a Master's Degree in Secondary Education.

Explore the world of geometry, a mathematical field that studies space, dimensions, and shapes. Learn about area, surface area, and volume. Discover the formulas to calculate the measurements of two-dimensional and three-dimensional shapes. Updated: 11/27/2021
Create an account

Before diving into two-dimensional and three-dimensional shapes, consider the basic geometric objects that create these shapes: points, lines, line segments, rays, and planes.

A point is represented by a dot and shows a location in space. A line is a set of straight points that extends forever in both directions as depicted by arrows on both ends. Rays are lines that end on one side. Line segments end on both sides. Planes are surfaces that extend forever in all directions. 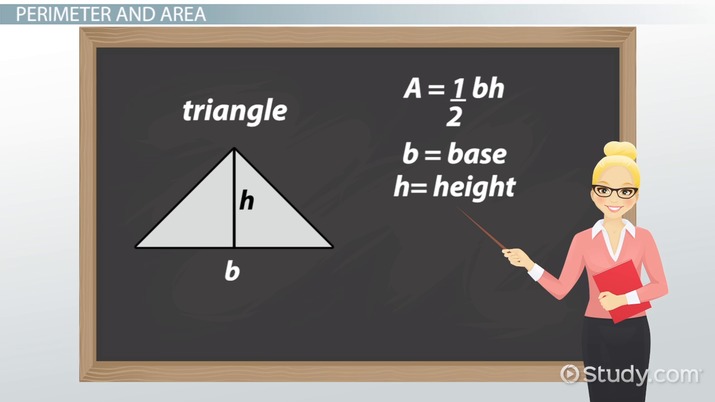 Coming up next: What is a Plane in Geometry? - Definition & Examples

Two-dimensional objects only have two dimensions: length and width.

Perimeter is a commonly calculated measurement with two-dimensional shapes in geometry that adds the length of a polygon's line segments. Perimeter calculations are for different applications, including finding how much fencing to put up around your yard.

As illustrated, perimeter calculations are essentially the same for the different shapes: the length of each separate line segment must be added together. For example, if one side of a square, a, measures 12 inches, then using the formula for a square's perimeter, 4a, p is 4 times 12, which equals 48 inches.

The formulas for finding the perimeter of a rectangle and a triangle also require finding the sum of the length of the sides:

Area is the measure of the surface of an object. The area of a square, rectangle, triangle, and circle can be found using formulas. Area calculations are used, for instance, when people want to know the square footage of their homes.

Surface area can be useful in real life when determining how much paint you need to cover an object. Review the formulas for the surface area of the different shapes:

The formula for the surface area of a cube or a rectangular prism is:

As an example, to find the surface area of a sphere with a radius of 3 feet, simply square the radius and multiply by 4 and by 3.14. The surface area is 113.04 feet squared.

Volume is the amount of a space an object takes up. For a cube, this means finding the area of one square, and finding how much stuff can fit inside if this square is stacked the same number of times as the length (or width). So, when solving for a cube's volume, the length of the side can be multiplied by itself three times because its length, width, and depth are equal.

And finally, to calculate the volume of a cylinder, use the formula V = Bh. (B = Area of the base)

Geometric Proof Types & Formats | What is a Proof in Geometry?

Area of a Parallelogram | Measure & Example

Volumes of Shapes: Formulas & Examples | How to Find the Volume of an Object

Basic Calculus Formulas & Problems | How to do Calculus

Proofs for Lines, Segments or Rays