The Battle of Tippecanoe in 1811 between the Native Americans and the United States armed forces was over the white expansion into Indian territory. Explore the definition of this battle, along with a summary and facts about what took place. Updated: 09/10/2021
Create an account

The Battle of Tippecanoe in 1811 was a conflict between the confederacy of native warriors led by Tecumseh, a Shawnee tribe member, and United States armed forces under the leadership of General William Henry Harrison. Fought primarily over white expansion into Indian territory, the battle lasted approximately one day with the United States securing victory. The conflict at Tippecanoe was the primary catalyst for the War of 1812 between Britain and the United States. 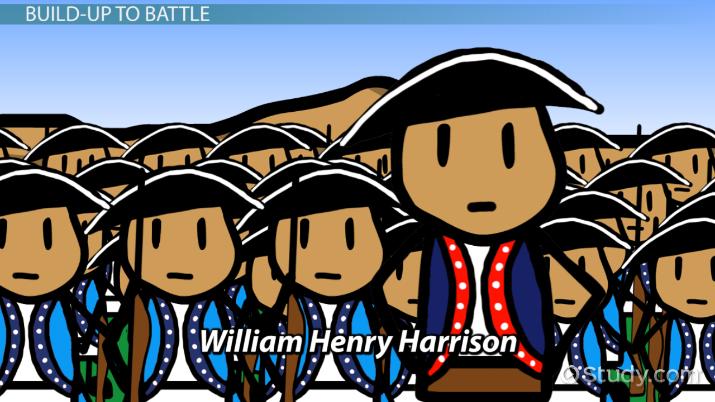 Try it now
Back
Coming up next: Manifest Destiny: Definition, Summary and Timeline

Build Up to Battle

At the dawning of the new decade in 1810, white settlement in the United States had been restricted to the easternmost coast of the nation. Americans believed that it was time to begin expanding west of the Appalachian Mountains and into areas that had been documented as Indian territory. This conviction of expansion led white settlers to begin encroaching into territories located in present-day Ohio and Indiana.

Simultaneously, Native Americans began fortifying their territory against white expansion. Two Native American leaders became synonymous with the effort to combat white settlement: Tecumseh and his brother Tenskwatawa, also known as 'The Prophet.' These two men helped resurrect a village that had previously been destroyed - it was known as Prophetstown and was located near the Tippecanoe River in what became the state of Indiana. Prophetstown was meant to be a site where native warriors could train in combat and tactics.

In addition to rebuilding Prophetstown, Tecumseh planned an extensive diplomacy campaign to neighboring Native American nations in the hope that a great native alliance could be built to combat white expansion. Unexpectedly, Tecumseh received a large donation of materials from the British who were encamped in Canada. Britain hoped that the natives could lock the United States into a war of attrition that would cost men, money, and resources.

General William Henry Harrison soon caught wind of Tecumseh's plans and the influx of war materials from the British to the natives. Harrison hoped to end Tecumseh's movement against white settlement quickly. In the summer of 1811, Harrison established a caravan of soldiers that numbered over 1,000 men, including infantry, cavalry, and the 'yellow jacket' militia. The goal was to seize Prophetstown while Tecumseh was pining for soldiers.

Harrison and his men arrived outside of Prophetstown on November 6, 1811. They were quickly met by natives who claimed to represent Tenskwatawa. They requested that Harrison enter into negotiations the following day with The Prophet, and asked that conflict be avoided at all costs. Harrison obliged and stationed his regiment next to a Catholic mission overlooking the Indian village. This was a good position because in war, it's important to always seize ground that is highest and closest to a body of water.

Tecumseh pleaded with Tenskwatawa before he left not to attack any white settlers or soldiers. Tecumseh wanted to establish a powerful native army before any type of war began. Tenskwatawa ignored the plea and encouraged men under his command to attack Harrison's regiment at dawn. He blessed each one of his warriors and told them that they could not be harmed by the white man.

The natives attacked the morning of November 7, 1811. Harrison's regiment was caught by surprise, yet they fought well against an overwhelming native army. The men were able to drive Tenskwatawa's raid out of their encampment within a day of fighting. The United States suffered over 180 casualties, including 60 dead. Native losses have never been confirmed.

After a day of battle, General Harrison allowed for his soldiers to recover. Tenskwatawa faced severe criticism following the native defeat at the Battle of Tippecanoe. Disillusioned, many of the native soldiers fled from Prophetstown and sought refuge with local tribes. On November 8, 1811, Harrison marched his troops into Prophetstown and officially seized the village. The soldiers immediately burned the village to the ground as a message to Tecumseh and his plan for war against the United States.

Tecumseh returned to what was Prophetstown several months after the Battle of Tippecanoe. At this stage, Tecumseh had no choice but to partner his remaining native soldiers with British forces stationed in Canada.

Tecumseh's forces, along with the Creek tribe members, eventually assisted British regulars against the United States during the War of 1812. Tecumseh was eventually killed during General Harrison's offensive at the Battle of the Thames. William Henry Harrison would eventually become president of the United States in 1840. This is where the slogan 'Tippecanoe, and Tyler Too' originated, referencing Harrison's accomplishments in battle. Harrison died in office after just one month of service.

Following white settlement incursions into land that was supposed to be designated for native use, the Native leaders Tenskwatawa, also known as The Prophet, and his brother Tecumseh, developed a plan to push back. The created a settlement called Prophetstown, which was located near the Tippecanoe River. Initially idealized as a military training camp for native fighters opposed to U.S. expansion into their lands, the village turned into a site of decisive defeat and destruction after the Battle of Tippecanoe on November 7, 1811.

The battle left Tenskwatawa in a weakened leadership position and Prophetstown burned by American soldiers. The victorious U.S. forces in this battle were led by General William Henry Harrison, who would go on to serve as president of the United States for a very short period of time in 1840. The conflict provided the impetus for Tecumseh to join forces with the British, leading to the War of 1812.

See if you're prepared to do the following after you've studied: