The Battles of Lexington and Concord set the stage for the American Revolution. Examine the events that led up to these early battles, learn how the colonial militia was formed, and meet the courageous colonists who defied the British Empire. Updated: 01/03/2022
Create an account

Do you like playing hide and seek? Sometimes, it's more fun to be the one who hides than the one who seeks, isn't it? Well, the battles of Lexington and Concord also involved a game of hide and seek. Let's see how. 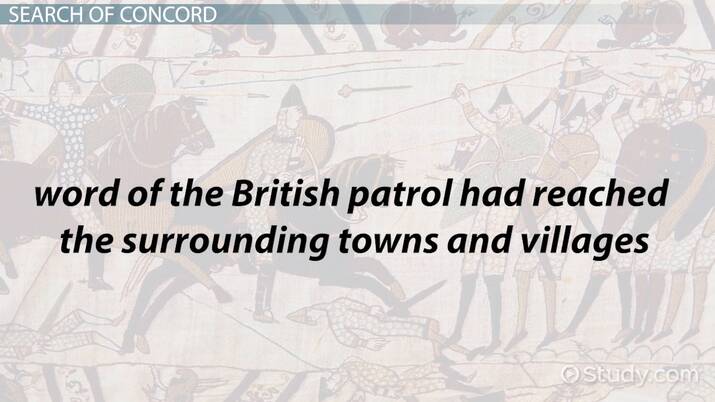 At the First Continental Congress, representatives from 12 of the 13 colonies met in Philadelphia in the fall of 1774 to decide what to do about the Intolerable Acts. Some colonists, such as Patrick Henry, wanted to threaten the government with rebellion if it refused to repeal the Intolerable Acts. However, most of the colonists wanted to boycott British goods instead. The Continental Congress created groups called Committees of Safety for the purpose of stockpiling weapons and ammunition for their militia (or part-time soldiers) in case they had further trouble with the British authorities.

Of course, the British government didn't want their colonists to have weapons and ammunition. In the spring of 1775, the British army decided to send soldiers to Lexington and Concord to capture these valuable weapons. However, by this point, the colonists had several spies working among the British. They warned Paul Revere, who along with a few others, rode throughout the countryside to warn the people of Massachusetts that the British were coming.

As the British troops approached Lexington, they found a small group of militia waiting for them. A British officer commanded the colonists to disperse. The colonial militia saw that they were outnumbered and began to leave, but then a gunshot rang out. Although no one is certain who fired it, it became known as the 'shot heard round the world' and the first step toward the American Revolution. Some British soldiers opened fire and then charged. When the dust settled, eight men of Lexington lay dead. One British soldier was wounded. The British then moved on to Concord.

When the British arrived in Concord, they searched the town for weapons and supplies. After a careful search, they found only a few cannons, some musket balls, and some rations. This was because the colonists had hidden their stockpiles in other nearby towns. By this time, word of the British patrol had reached the surrounding towns and villages, and large numbers of militia traveled toward Concord.

Let's review. The First Continental Congress was a response to the Intolerable Acts and paved the way for the events in Lexington and Concord by creating the Committees of Safety that began gathering weapons and ammunition for use by the colonial militia. Not wanting the militia to be armed, the British sought out these hidden stashes of weapons. However, due to the action of colonial spies and Paul Revere, they were unable to find them. The ''shot heard round the world'' at Lexington and the defeat of the British at Concord were the first steps toward the American Revolution.

British Generals of the Revolutionary War Lesson for Kids

The Bill of Rights Lesson for Kids: Definition & Summary

Why Did the Boston Tea Party Happen? - Lesson for Kids

Who Was Involved in the Boston Tea Party? - Lesson for Kids